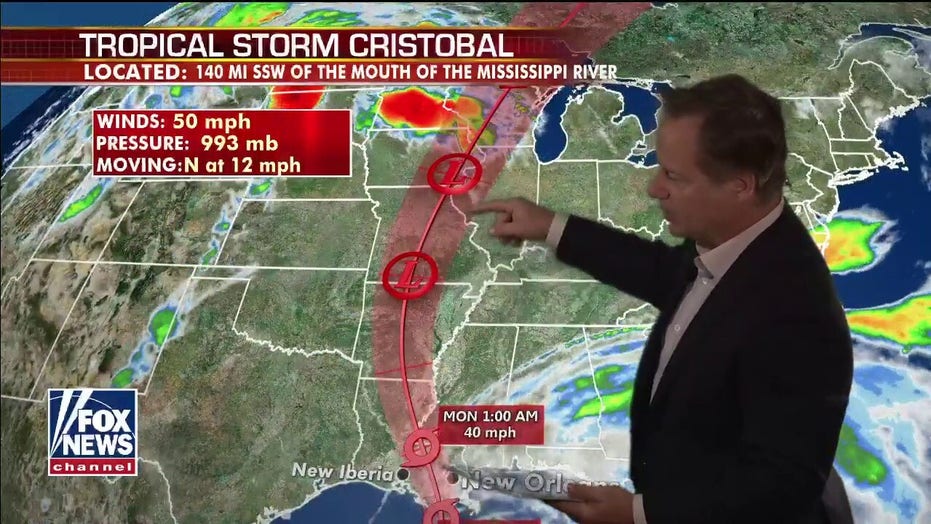 The third named storm of the 2020 Atlantic hurricane season will make landfall by early afternoon on Sunday along the Gulf Coast, but will not grow any stronger before roaring ashore.

As of Sunday morning, Tropical Storm Cristobal is still a 50 mph sustained wind storm and its window for strengthening is gone.

The official forecast from the National Hurricane Center (NHC) keeps Cristobal at a 50 mph storm through landfall and will then weaken as it moves north up the Mississippi River Valley.

The center of the storm should pull over land sometime in the afternoon around Houma, La. Tropical storm warnings are still in effect from Intracoastal City, La., to the Okaloosa/Walton County Florida line as well as for Lake Pontchartrain and Lake Maurepas.

Tropical Storm Cristobal is preparing to make landfall along the Gulf Coast of Louisiana on Sunday. (Fox News)

The impacts to the U.S. from Cristobal remain the same as forecast, with 2 to 4 feet of storm surge across southeastern Louisiana and coastal Mississippi.

A storm surge warning has been issued from the mouth of the Mississippi River to Ocean Springs, Miss., but the destructive surge isn't expected.

The heaviest of the rain associated with Cristobal is over for Florida and will now be focused on southern Mississippi and southeastern Louisiana. Rainfall amounts of 3 to 6 inches are expected, with up to 8 inches in isolated areas. This will cause some very localized flooding.

Brief, isolated tornadoes will also form within rain bands moving onshore on the east side of Cristobal.

On Monday and Tuesday, heavy rain will spread northward deeper into the Mississippi River Valley. Between 2 to 5 inches of rain can be expected in parts of Arkansas, Missouri, Iowa and Wisconsin.

Storms during hurricane season often raise a concern about oil production in the Gulf of Mexico.

Cristobal is too weak and is moving too quickly to have big impacts on the oil platforms in the area. A significant interruption to oil production should not be an issue.

Cristobal at the start of a busy hurricane season

Overall, this is already our third named storm of this hurricane season, which officially began just six days ago. We do expect a very active season this year, and that is shown by the amount of activity we've already seen.

This forecast is well above the averages of 12 named tropical storms, six hurricanes and three major hurricanes during the season.