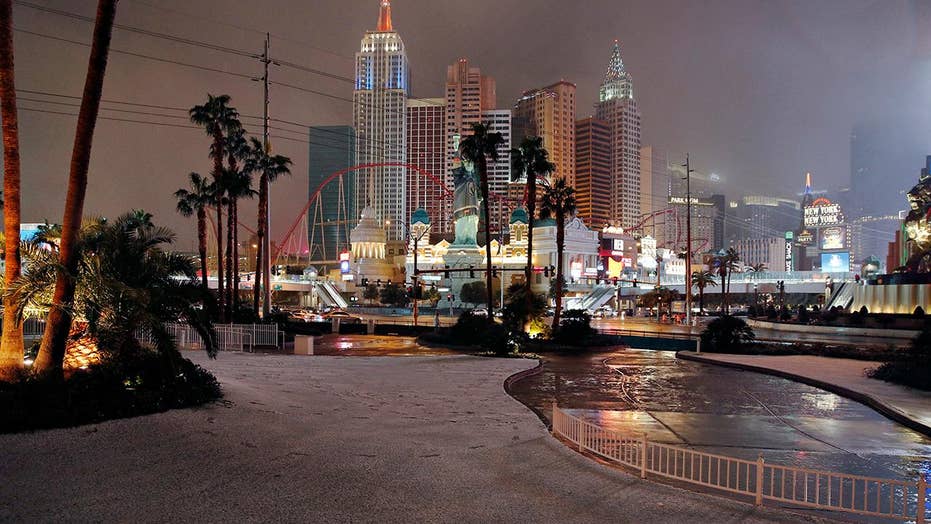 Snow falls in Las Vegas for second time in a week

The famed Las Vegas Strip resembled a scene out of the Arctic on Thursday after a rare snowstorm turned the area into a winter wonderland.

The National Weather Service said there was 1 inch of snow at McCarran International Airport as of 4 a.m. Thursday.

Winter storm warnings had been posted for the Clark Mountains and most of Mohave County in Arizona through Friday morning. In Las Vegas, a winter weather advisory was issued through 4 a.m. Friday.

"Total snow accumulations up to 3 inches expected along the western and southern outskirts of the Las Vegas Valley as well as surrounding areas in Clark County," the NWS said. "For the Las Vegas Metropolitan area, rain may be mixed in with snow at times which would result in much less, if any accumulation."

Snow falls on the Luxor hotel and casino Wednesday, Feb. 20, 2019, in Las Vegas. A winter storm is expected to drop up to 3 inches of snow on Las Vegas' southern and western outskirts while other parts of the metro area will get rain mixed with snow. ((AP Photo/John Locher)

The weather service said Las Vegas' half an inch of snow late Wednesday was the first measurable snow since the record keeping started. The famed "Welcome to Fabulous Las Vegas Nevada" sign was seen surrounded by snow.

Photos showed the city's casinos draped in snow as tourists took to the streets to capture the rare scene.

A dusting of snow covers an area along the Las Vegas Strip, Thursday, Feb. 21, 2019, in Las Vegas. A winter storm is expected to drop up to 3 inches of snow on Las Vegas' southern and western outskirts while other parts of the metro area will get rain mixed with snow. (AP Photo/John Locher)

Las Vegas schools were open Thursday, and the Nevada Highway Patrol said some areas had snow and ice but all freeways were open.

The snow snarled flights at the airport and traffic on highways.

"We don't have snowplows," airport spokeswoman Christine Crews told the Associated Press as she tallied about 100 flight cancellations due to snow and ice. "But we have airfield maintenance vehicles and sweepers ready to go."

Snow accumulates on a median along the Las Vegas Strip at the "Welcome to Fabulous Las Vegas" sign, Thursday, Feb. 21, 2019, in Las Vegas. (AP Photo/John Locher)

Attorney Al Lasso, who moved to Las Vegas from New Jersey 25 years ago, snapped a photo of a ruler standing in 7 inches of snow on his back patio in the foothill community of Summerlin.

Las Vegas recorded a trace of snow on Feb. 10 as several storms moved through the region earlier this month. Some suburban foothill areas got several inches of snow on Sunday.