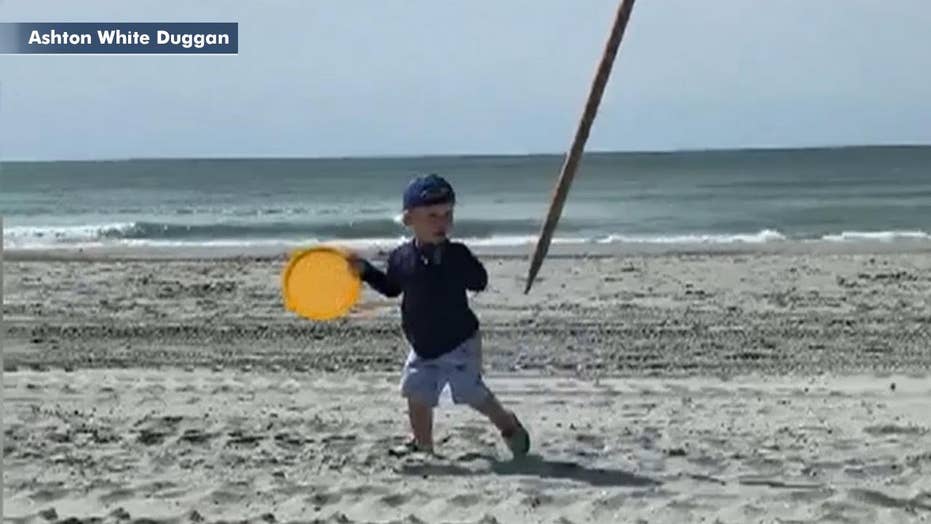 A flying umbrella is seen coming within inches of a boy walking on North Myrtle Beach, South Carolina.

A day at the beach for a North Carolina family nearly turned into a tragedy when a toddler was nearly impaled by a beach umbrella launched in the air by a sudden gust of wind.

Ashton Duggan was with her husband and son in North Myrtle Beach, South Carolina, taking a video of her toddler hanging out in the sand when an umbrella came flying by, almost striking her son.

"Out of nowhere this umbrella just flies and misses him probably by six inches," Duggan told FOX46. "It was terrifying."

WOMAN IN MARYLAND IMPALED IN CHEST BY BEACH UMBRELLA

Duggan said a lifeguard had previously dug a hole for their umbrella and they felt sure it was secure. But the gust of wind that sent another umbrella at theirs also picked up about six other umbrellas along the beach.

"You just never know what's going to happen and how life could change in the blink of an eye," she told FOX46.

According to the Consumer Product Safety Commission, between 2008 and 2017 over 31,000 people nationwide were treated at hospitals for umbrella-related injuries.

The Waxhaw, North Carolina resident wanted to share the video to make beachgoers "super aware" of their surroundings.

"I really do think that God's hands had ahold of Henry that morning and I'm thankful for the outcome and that I was able to capture something like this to spread awareness for others," she said. "I hope to save a life this summer and summers to come."

Last summer, a British tourist in New Jersey had her right ankle pierced by a wayward beach umbrella that was sent flying due to the "force of the wind." Nearly a week later, a woman in Maryland was impaled in the chest by a loose umbrella.

In 2016, a woman was killed in Virginia Beach when a windblown beach umbrella impaled her in the torso.

Duggan said she had heard of other incidents, but never actually believed it could happen until she saw it with her own eyes.

"A flying umbrella almost flipped our world upside down," she told FOX46.