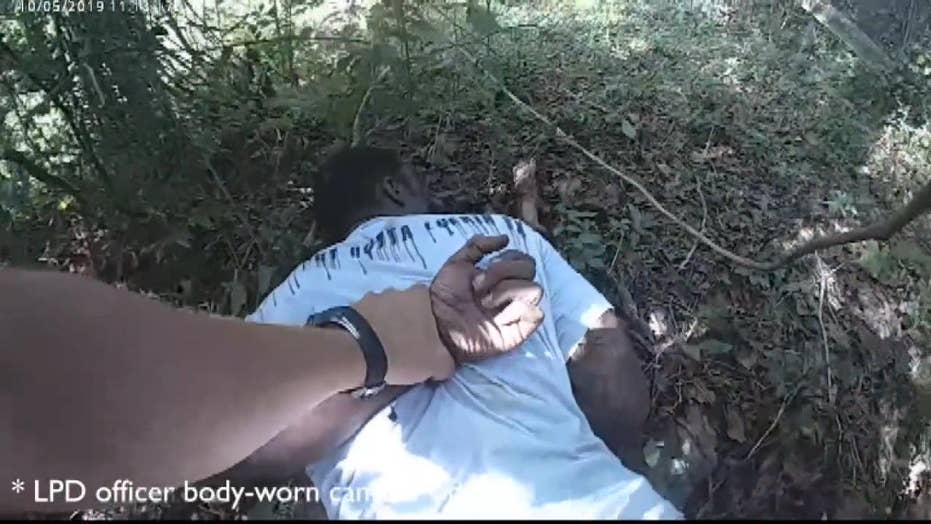 Raw video: Bodycam footage shows a Texas police officer chasing down and arresting the 30-year-old accused of raping a woman and forcing her into the trunk of a car.

A Texas man accused of kidnapping and raping a woman before stuffing her inside the trunk of a car has been arrested after leading police on a foot chase through the woods, authorities said.

The Lufkin Police Department released body camera video of the two-minute pursuit that ended in the arrest of 30-year-old Zataymon Skinner on Saturday afternoon.

About 10 hours earlier, Skinner kidnapped the woman as she was leaving her job, telling her to “get in (the car) or I’ll kill you,” police said. He allegedly drove the woman’s car to a dead end around 12:30 a.m. and raped her before locking her in the trunk.

As he began driving, the woman was able to use the emergency lever to escape from the trunk and call for help, police said. Skinner allegedly continued driving her car and left the scene.

Skinner had warrants out for parole violation and theft at the time of his arrest on Saturday. (Lufkin Police Department)

The woman told police that Skinner, whom she knew only as “Mon,” had been her neighbor for a short time at a previous residence.

A call around 11 a.m. Saturday from the Lufkin Land community alerted police that a man named “Mon” had caused a disturbance at a home and fled on foot, the department said.

The bodycam video showed responding officers chasing Skinner through backyards and jumping fences. Skinner eventually appeared to give up and collapse in a wooded area. An officer is shown trying to Tase Skinner, but the barbs missed, police said.

Skinner, who had warrants out for parole violation and theft, was charged with evading arrest, aggravated kidnapping, and aggravated sexual assault, police said.

The department praised the woman for her escape, advising others who may find themselves in similar situations to always fight back.

“We would like to take a moment to remind everyone - if you ever find yourself in a situation like this one, FIGHT,” police said. “Do everything in your power to prevent from being taken because your odds of survival decrease significantly at that point.

“We are so thankful this woman escaped with her life and that we were able to get Skinner in custody before he victimized anyone else.”

Police said they are still searching for the stolen 2006 Ford Fusion.