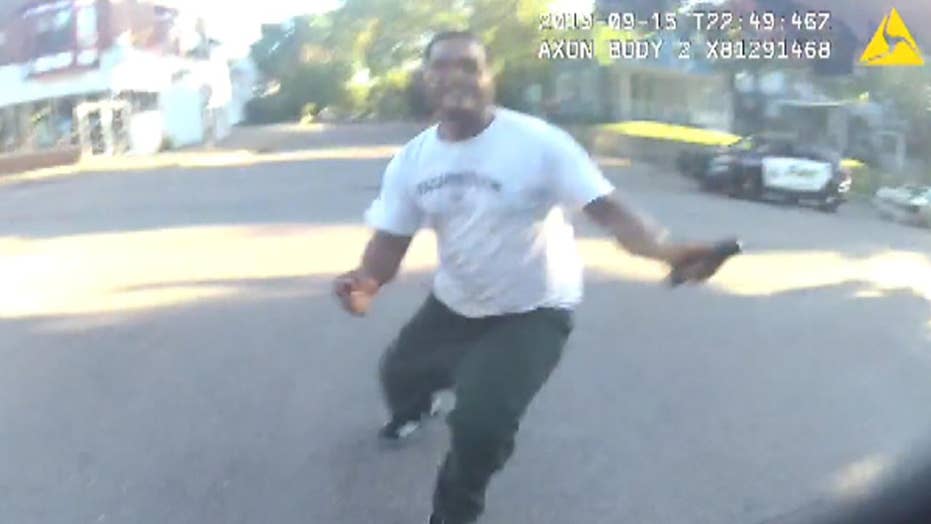 Authorities in Minnesota released body camera footage Tuesday showing the moment a man carrying a knife angrily charged at a police officer before he was fatally shot.

St. Paul Police Officer Steven Mattson shot 31-year-old Ronald Davis on Sept. 15 during a confrontation that lasted less than a minute after Davis rear-ended his squad car. The Minnesota Bureau of Criminal Apprehension and St. Paul Police have said both men exited their vehicles and Davis confronted the officer, ignoring commands to drop the weapon until Mattson ultimately fired his gun, killing Davis.

"I see Officer Mattson defending himself, while retreating. And, as a son of a (retired) police officer, I can't say that I can see anything beyond that we could have expected him to do," St. Paul Mayor Melvin Carter said at a press conference Tuesday.

Carter, who is black, told reporters that Mattson faced an "incredibly dangerous and scary event that no person and certainly no officer would ever hope to encounter." He said the entire community is mourning following the release of the video but he hopes the footage helps minimize rumors and speculation.

The deadly shooting triggered a demonstration through the city's Midway neighborhood a week later by several dozen protesters who called for an end to police killings, according to FOX9.

At a press conference Tuesday, St. Paul Police Chief Todd Axtel said he could not stand by “knowing that a good officer, and all of our officers, are being assailed by people who don’t have the facts.”

Axtel, who added that the shooting was "difficult to watch," said his heart goes out to Davis' family while also saying that Mattson's life has also been forever changed by the events of Sept. 15.

“I remain hopeful that quickly releasing this video will allow us to move forward with mature discourse about how such tragedies can be prevented in the future—without having to wade through the waters of irresponsible accusations of murder, calculated cries of injustice and threats made against an officer who had no choice but to defend himself against an immediate and violent attack,” Axtell said.

In the video released by police, the officer's body-camera video shows Davis attacking the officer after rear-ending the police SUV.

As Mattson got out, the footage showed Davis running into view. Mattson can be heard shouting, "Whoa! Whoa!" and "Get away from me! Drop the knife!" The officer appears to fall to the ground before quickly getting up again. In the encounter that lasts less than 30 seconds, at least two shots can be heard.

In the full clip, which was a minute long, freeze-frames show Davis holding a flashlight in his left hand and the knife in his right. The BCA earlier said that Davis was holding a knife when he was shot, and a knife was recovered near his body.

The BCA is still investigating the deadly shooting. The agency previously said it has no position regarding police releasing the body camera video. However, once the video was released, the bureau said its investigators would not be able to ensure the integrity of statements from witnesses who come forward after they have seen the video.

Once the BCA's investigation is complete, the agency will turn over its findings to the Ramsey County Attorney's Office, which will determine whether or not to pursue charges, according to FOX9.

The Anti-Police Brutality Coalition said in a statement that the release of partial video was insufficient, and it wasn't clear whether Mattson could have used de-escalation tactics or nonlethal force. The group demanded the release of all the video, as well as any surveillance video, and all investigative documents.