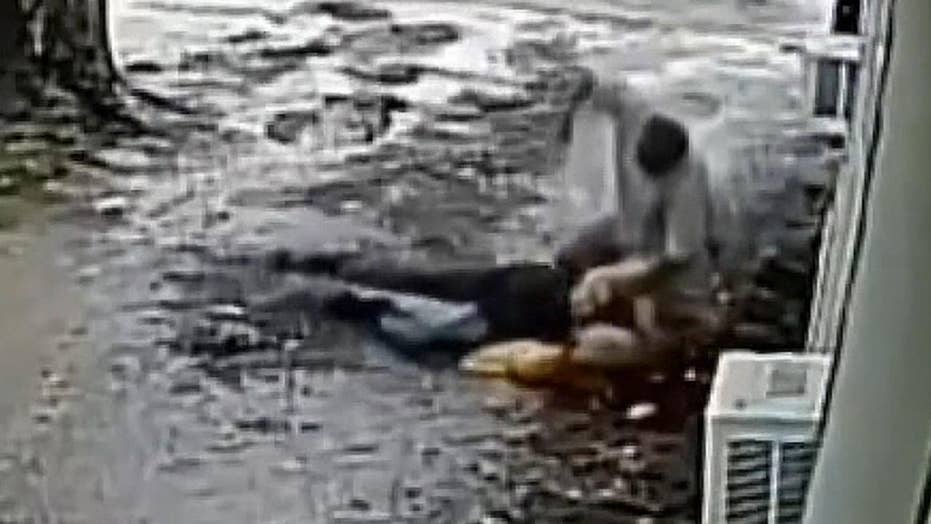 Authorities in the nation's fourth-largest city are searching for a suspect who was seen on video earlier this month beating an elderly man during a violent robbery.

The Houston Police Department said the incident happened on June 5 around 3:40 p.m. when the 89-year-old man was returning home from a walk and was approached by a man in his driveway he did not know.

"This goes down as by far the worse video I've seen this year, simply because it goes without saying because there's two types of people you don't mess with and if you do it's going to get a lot of public attention: one, kids, two, elderly, don't mess with them," Houston Detective Jeff Brieden told FOX26. "And in this case, this guy is an elderly 89-year-old male, he turns 90 next month, by no means deserved this."

The man began to talk with the suspect, who led him to the side of his house.

"This is a robbery," 89-year old victim Gilevalto Herrera told ABC13. "That's the only thing he said to me."

In a video released by police, the suspect can be seen pushing Herrera to the ground. The suspect then beats and knees Herrera before going through his pockets.

Gilevalto Herrera, 89, was brutally beaten in a robbery outside his home in Houston on June 5. (Houston Police Department)

The 89-year-old lost consciousness during the attack as the suspect stole his wallet that had about $100 inside.

Police said the suspect is described as a Hispanic male between 30 and 35 years old who is known to be in the area of Villa Drive and Fauna Street in the neighborhood.

Anyone with information about the attack is asked to call Houston Crime Stoppers at 713-222-TIPS (8477).