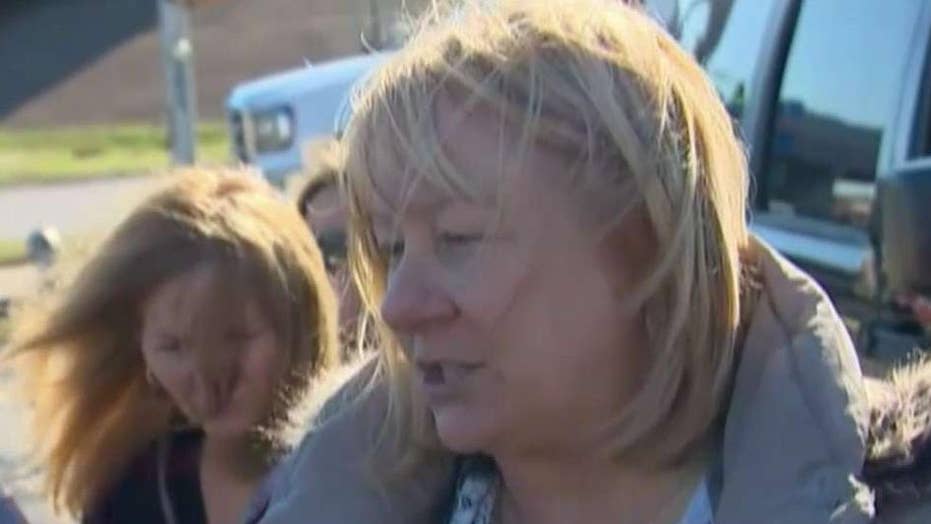 Worshipers at a Texas church where two were killed are speaking out after the attack; Jeff Paul reports form the scene.

Editor's Note: An earlier version of this story cited reports identifying Jack Wilson as a former FBI agent. We are unable to confirm his prior employment with the bureau and have revised the story accordingly.

The man who jumped into action when a gunman opened fire on worshipers during a church service in Texas said Monday he was placed in a position he didn't want to be in, but had to react because "evil exists."

Two men were killed when the gunman opened fire at West Freeway Church of Christ in White Settlement on Sunday morning, as more than 240 parishioners were inside. Within seconds, he was shot to death by two congregants who fired back.

Jack Wilson, a Hood County resident running for commissioner for the 3rd Precinct who is the head of the church's security team and a firearms instructor, shared some details on his campaign's Facebook page as he gave thanks to "all who have sent their prayers and comments on the events of today."

"The events at West Freeway Church of Christ put me in a position that I would hope no one would have to be in, but evil exists and I had to take out an active shooter in church," he wrote. "I’m thankful to GOD that I have been blessed with the ability and desire to serve him in the role of head of security at the church."

Jack Wilson said he "had to take out an active shooter in church" in a Facebook post. (West Freeway Church of Christ/Courtesy of Law Enforcement via AP/Facebook)

At a news conference Sunday night, White Settlement Police Department Chief J.P. Bevering told reporters the gunman – who has yet to be identified – had sat down in a pew before getting up, taking out a shotgun and firing at a parishioner, who was killed.

Wilson told reporters gathered at his home in White Settlement the gunman first shot Richard White, who was one of the security guards who has been keeping an eye on the man due to "some concerns about him." The church security team head said others noticed the man had a fake beard and fake wig on, in addition to a long coat.

"We had cameras turned on him" he said.

Jack Wilson recounts the shooting inside the church on Sunday. (KDFW)

When the gunfire began, Wilson said there were people initially in between him and the shooter who stood up, and that he wanted to make sure he didn't hit a member as they were right in front of him. A livestream of the church service shows the gunman getting up from a pew and talking to someone at the back of the church before pulling out a gun and opening fire.

Parishioners can then be heard screaming and seen ducking under pews or running as papers fly to the floor.

"I had a clear shot and I was comfortable taking the shot," Wilson said Monday.

Within six seconds, the gunman was down, bleeding "profusely" from his head after Wilson fired one round. He told reporters on Monday he then pulled the shotgun away from the man's body as he was "twitching" and stood over him in case the shooter tried to get up, which he did not.

"You have to be prepared at all times, at all places," he said Monday. "And that's what I strive, that's the way I teach, that's the way I want people to understand if they are going to wear a firearm for personal protection for themselves, or family, or anyone else they need to be aware that it can happen anytime, anywhere."

In a briefing with reporters on Monday morning, Texas Attorney General Ken Paxton said that after talking with members of the congregation, he found that Wilson had given training to others at the church because he had a shooting range.

"They did the right things and they are the model for what churches and other businesses need to focus on," he told reporters.

On his Facebook page, Wilson lists his personal history as a small business owner for 30 years and who served in negotiating proposals and contracts for a major defense company. He said he also served as a Hood County Reserve Deputy Sheriff from 1980 to 1986. There were initial reports that he served as an ex-FBI agent, but Fox News was unable to confirm his employment with the bureau.

"I swore to the oath then and still live by the oath today," he wrote.

Texas church shooting: Gunman kills 2 before being taken down by armed congregants

A gunman opened fire during a Texas church service, killing two and injuring others before being shot dead by armed parishioners.

In the Facebook post on his personal history, he added: "I continue to work with Federal, State and local levels of law enforcement."

Wilson, who has previously posted on Facebook that he "totally" stands by President Trump, said his wife of 51 years has raised his family in Granbury/Hood County for the last 42 years, and they are the proud parents of three daughters and the "blessed grandparents" of 10, and one great-grandchild.

Police and fire departments surround the scene of a shooting at West Freeway Church of Christ in White Settlement, Texas, Sunday, Dec. 29, 2019. (Yffy Yossifor/Star-Telegram via AP)

While authorities have not yet identified those killed in the shooting, Tiffany Wallace told Dallas TV station KXAS that her father, Anton "Tony" Wallace, was one of the victims in the attack. She said her father was a deacon at the church and had just passed out communion when the gunman approached him.

"I ran toward my dad and the last thing I remember is him asking for oxygen and I was just holding him, telling him I loved him and that he was going to make it," Wallace said.

Wallace said her father was rushed to a hospital but he did not survive.

Wilson identified the second church member who died in the shooting as Richard White. He said White's wife worked at the church and that his concern going forward was for the "loss or Rich and Tony and their families."

"I am very sad in the loss of two dear friends and brothers in CHRIST, but evil does exist in this world and I and other members are not going to allow evil to succeed," Wilson wrote early Monday. "Please pray for all the members and their families in this time. Thank you for your prayers and understanding."

Gov. Greg Abbott asked the state to pray for the victims, their loved ones and the community of White Settlement, located about 8 miles west of Fort Worth.

“Places of worship are meant to be sacred, and I am grateful for the church members who acted quickly to take down the shooter and help prevent further loss of life,” Abbott said in a tweeted statement.