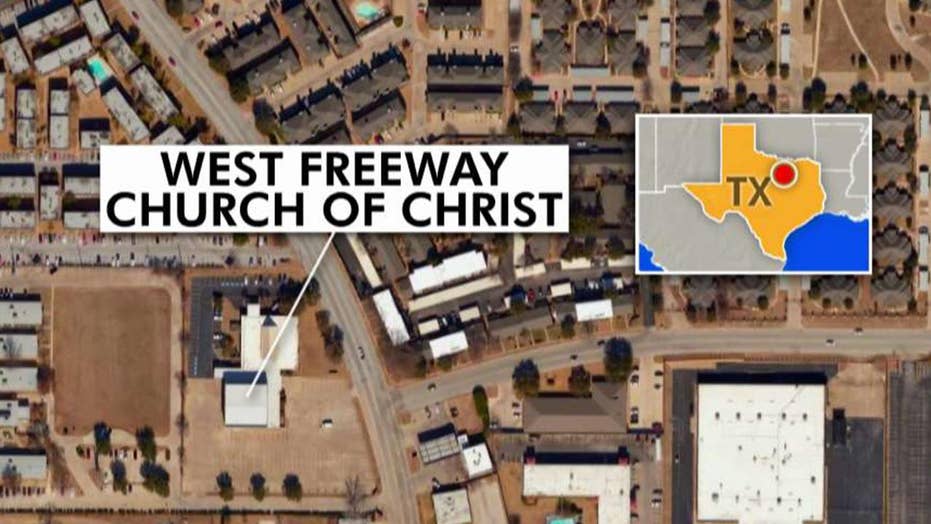 The deadly shooting inside a Texas church on Sunday prompted Republicans there to credit the changes in state law that permitted concealed firearms inside places of worship after it was revealed that the gunman was fatally shot six seconds after opening fire.

CHURCH SHOOTING LATEST IN MANY ATTACKS IN RECENT YEARS

The unidentified gunman killed two when he opened fire inside the West Freeway Church of Christ in White Settlement, which is outside Fort Worth. Authorities are trying to determine a motive. Police said the gunman entered the church and sat down before 11 a.m. He stood up, pulled out a shotgun and shot two parishioners who died at a nearby hospital.

Britt Farmer, the church's senior minister, told the Dallas Morning News that the church lost two "great men today, but it could have been a lot worse, and I am thankful our government has allowed us the opportunity to protect ourselves."

Gov. Greg Abbott, a Republican, signed eight gun bills into law in June that included one that allowed legal gun owners to bring their concealed weapons into places of worship.

The Texas Tribune reported that the state's House gave preliminary approval of the bill more than one year after the shooting at a church in Sutherland Springs that killed 26.

"We have learned many times over that there is no such thing as a gun-free zone," state Sen. Donna Campbell, co-sponsor of the bill, said at the time. "Those with evil intentions will violate the law and carry out their heinous acts no matter what. It makes no sense to disarm the good guys and leave law-abiding citizens defenseless where violent offenders break the law to do great harm."

Texas Lt. Gov. Dan Patrick, at a press conference after the shooting, praised the two volunteer security guards and credited the changes in state law.

"The immediate responder is the most important," he said, according to the Dallas  Morning News. "The citizen responder. Because even though the chief’s brave officers were here in less than a minute … by the time they got here, the shooting was over. And that always happens, that over 50 percent of shootings, our first responders, it’s usually over when they get there, no matter how hard they try."

Democrats like Julian Castro pointed to the shooting as another horrific outcome due to lax gun laws and poor leadership.

"We can take steps to reduce these horrific attacks right now—we just need our elected leaders to have the courage to act," he tweeted.

Beto O'Rourke, the former Democratic presidential hopeful who has spoken out against gun violence in the past, tweeted that he was saddened to learn about the shooting and said, "Clearly what we are doing in Texas, what we are doing in this country, when it comes to guns is not working."