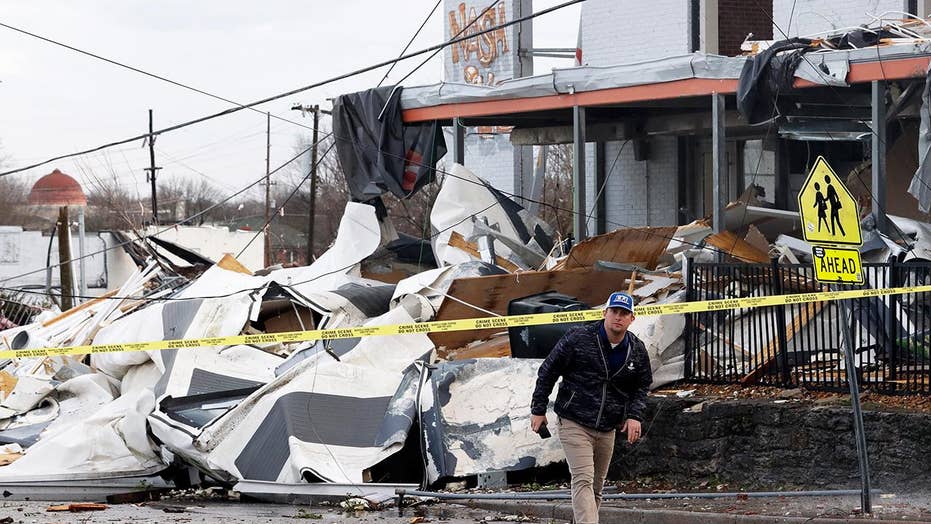 One of the tornadoes that ripped through Middle Tennessee early Tuesday was a "violent" monster that left at least 18 dead in one county, according to officials.

The National Weather Service office in Nashville said Wednesday night the twister that struck Putnam County was an EF-4 tornado with wind up to 175 mph that killed 18 people and injured 88 in that county. Overall, the tornadoes and severe weather are blamed for 24 deaths in the region.

Forecasters said that the Putnam County twister was the first violent tornado in the Middle Tennessee area since April 2009, and the path and width of the storm are expected to be determined in the coming days.

According to the National Severe Storms Laboratory, the most common and practical way to determine the strength of a tornado is estimating wind speeds by assessing the damage caused. The Enhanced Fujita Scale or EF Scale, used since 2007, is the National Weather Service's method to rate tornadoes.

The EF scale uses indicators, including damage to different types of structures such as barns, mobile homes, trees and schools, according to the NWS forecast office in Norman, Okla.

The ratings of tornadoes on the Enhanced-Fujita Scale (Fox News)

The Storm Prediction Center said tornadoes estimated to be an EF-4 are considered to be "violent," with winds between 166 and 200 mph. Twisters in this second-strongest category create "devastating" damage.

The monstrous tornado that bore down on Putnam County caused a 2-mile-long path of destruction and damaged more than 100 structures. The 18 people killed included five children under the age of 13. Another 88 were injured, some of them critically.

Putnam County Mayor Randy Porter shared a photo the morning after the storms of an American flag being raised amid the destruction, saying "our county is in mourning tonight with the devastating loss we suffered."

"Our prayers go out to all the families who lost loved ones, friends, homes and belongings," he wrote. "We live in a great community that will come together and recover, as we always have in these troubling times."

Crews still were sifting through debris on Wednesday as volunteers spent the day cutting damaged trees and sorting debris.

Billy Leath, 86, shows the bedroom Wednesday, March 4, 2020 where he and his 83-year-old wife sheltered from the tornado that destroyed his Putnam County, Tennessee, neighborhood early Tuesday. (AP Photo/Travis Loller)

Cookeville resident Darrel Jennings told the Associated Press on Wednesday his home was fine, but the house next door was leveled. The next-door neighbors who survived then sheltered in his home, but three of their children had head injuries. He told the AP he used a radio to call for help since cellphone service was out.

In his 32 years as a volunteer EMT and firefighter, Jennings said he had been to about 10 different tornado sites, and “this is about the worst I've ever seen.”

A subdivision near McBroom Chapel Road in Putnam County, Tennessee, was almost completely destroyed by a tornado that blew through on Tuesday morning, March 3, 2020 before dawn.  (AP Photo/Travis Loller)

One resident told FOX17 on Wednesday that she had a tree harpoon through her window, nearly missing her.

"The tree came right through the window and down here, and it would have speared me" Marianne, whose last name was withheld, told FOX17. "I praise God that he got me out of here in time."

TENNESSEE TORNADO VICTIMS INCLUDE 'BEAUTIFUL FAMILY' OF 3, COUPLE IN THEIR 80'S

About 80 miles to the west, a tornado reaching EF-3 stage at some points with winds up to 165 mph barreled along a 50-mile path that began in Nashville. It killed two people and wrecked homes and businesses.

The twister continued into nearby Wilson County, which saw three deaths, and into Smith County. Benton County,  west of Nashville, had one storm-related fatality.

Gov. Bill Lee declared an emergency, sent the National Guard to assist search-and-rescue efforts and ordered flags over the state Capitol to fly at half-staff until Friday for those killed.

President Trump, who plans to visit Friday, tweeted: “The USA stands with the people of Tennessee 100%, whatever they need!”