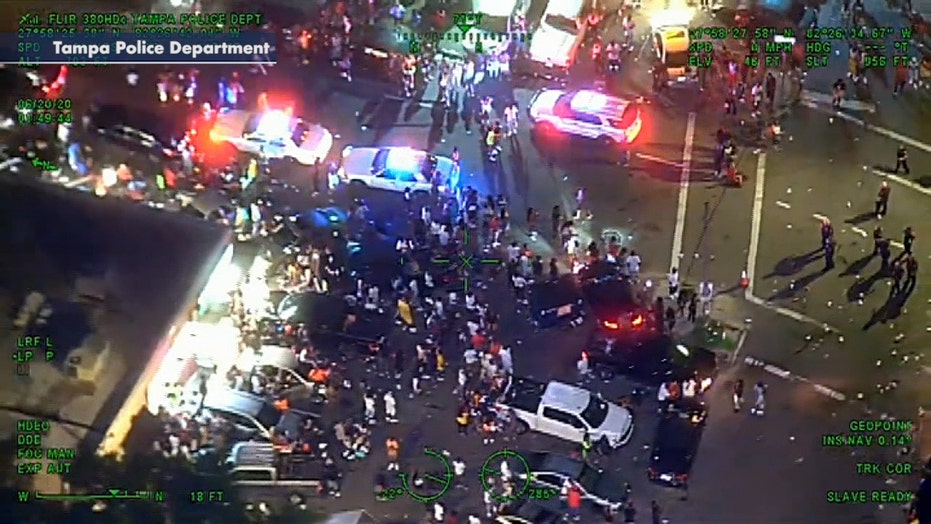 Two Tampa police officers were injured early Saturday after a crowd of hundreds surrounded a group of officers in an "ambush," the Tampa police chief said.

Officers were responding to a report of shots fired and a possible gunshot victim at an intersection near the Ybor City neighborhood around 1 a.m., Chief Brian Dugan told reporters Monday. A crowd of hundreds was at the scene when police arrived.

As offices searched for a possible victim, Dugan said the hundreds of people blocked all four ends of the intersection and became aggressive. The crowd surrounded officers, threw bottles and glass, and jumped on a police vehicle. Officers could not locate a victim.

"It's an ambush. I have no other way to describe it,” Dugan said. “When there are that many people out there and clearly no one had been shot. It was just a set up to get the cops there."

Aerial footage from the scene shows a crowd surrounding officers at an intersection and officials can be heard over audio saying that an officer had been struck with a bottle. At one point, a large group of the crowd can be seen running away down the street.

“There were hundreds of them,” Dugan said, referring to the crowd. “Hundreds. We actually ended up having to call every single police officer that was available that night to respond there, from New Tampa to South Tampa.”

Dugan said more than 100 officers responded to the scene. One person was arrested.

Responding to a question on department morale during this time of heightened anti-police sentiment, Dugan said the pressure currently on police officers is “incredible.”

“Just by doing your job, whether you’re right or wrong, it doesn’t matter right now,” he said. “No one is listening. Any justified action is getting twisted.”

The chief called on residents to “step up and support their cops.”

“The police, we always have everyone’s back,” he said. “Nobody has ours right now.”