New York man Karim Azizi, 36, has been released on bail less than 24 hours after he was arrested and charged in connection to a baseball bat attack.

The baseball bat-wielding suspect in a brazen attack in New York City was released less than 24 hours after his arrest, Fox News has confirmed.

Karim Azizi, 36, was arrested Wednesday and charged in connection to an attack on a man in broad daylight that was captured on video. He was arraigned that afternoon and released from jail early Thursday morning after his girlfriend made bail, according to his attorney

"He posted the entire bail amount of $7,500, and is at liberty," Azizi's attorney Jason Goldman said.

Prosecutors had asked the court to set bail at $40,000, given the violent nature of the attack, but the court instead set bail at $7,500, according to the Manhattan District Attorney's office.

A suspect who attacked a man with a baseball bat in Upper Manhattan has been arrested, the New York Police Department said Wednesday. (NYPD)

Azizi, who has no prior criminal history, was arrested at around 8 a.m. Wednesday and charged with assault, attempted assault and criminal possession of a weapon for the Nov. 29 attack on Amsterdam Avenue and West 148th Street in Harlem.

Video footage of the attack shows a man dressed in all black with his face covered pulling a bat from his pants and hitting a 47-year-old man in the back of the head as he walks down the street. 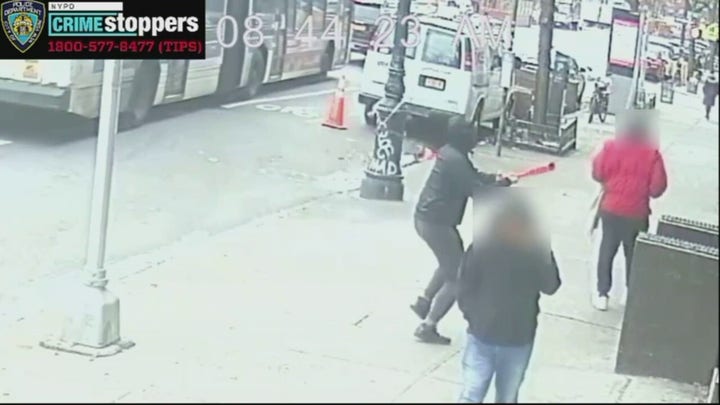 The victim falls to the ground and rolls around in pain. The suspect walks away and then comes back where he appears to yell and stomp on the man.

A man with a no criminal history is accused of assaulting another man with a baseball bat in Harlem.   (Michael Nagle/Bloomberg via Getty Images)

The victim was taken to a hospital and was in stable condition. The arresting officer said the victim suffered multiple injuries, including bleeding about the face and head, swelling about the back of the head and a laceration about the front of head, a criminal complaint shows.

Authorities have not disclosed a motive for the attack. The New York Post reported that the suspect and victim had a verbal argument before the attack, citing police sources.

Prosecutors characterized Azizi as a "flight risk," noting he allegedly left the scene after assaulting the victim, which they said showed "a likeliness to evade prosecution."

His next court appearance is scheduled for Monday.