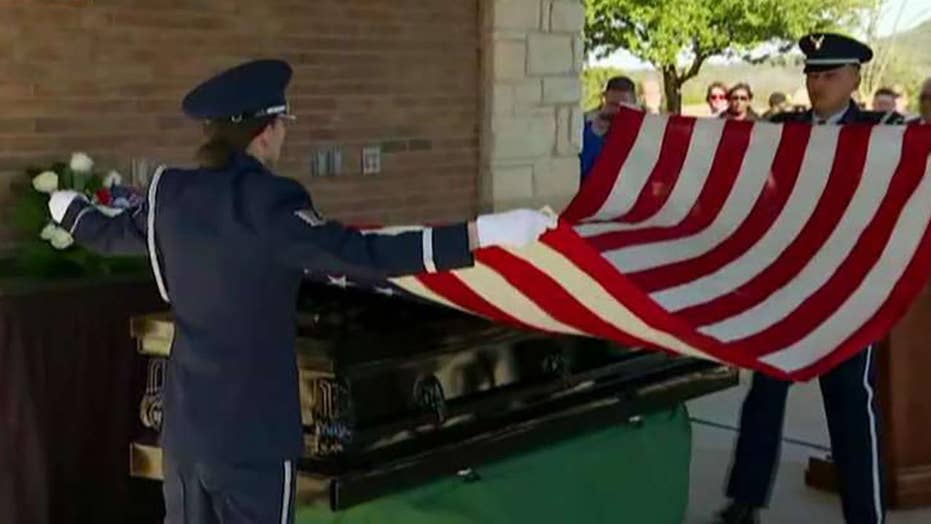 Thousands of strangers attend a full military burial for veteran Joseph Walker in Austin, Texas after the cemetery could not reach any family members.

The thousands of strangers who responded to an online appeal to attend the Texas funeral of a Vietnam War-era Air Force veteran “came together as Americans,” says a biker who helped spread the word about the event.

Luis Rodriguez told Fox & Friends on Tuesday the line of cars to get into the cemetery for Joseph Walker’s military funeral in Killeen, Texas, was “incredible.” Reports from the scene said the line stretched for miles.

The Central Texas State Veterans Cemetery, which sought mourners in a viral Facebook post so Walker wouldn’t be buried alone, said about 2,000 people showed up for Monday's funeral. Walker, 72, served in the Air Force from 1964 to 1968 and received an honorable discharge. He died in November.

“We all came together as Americans to pay respect to somebody who put our country first, to fight for our freedoms,” said Rodriguez, a member of Wind Therapy Freedom Riders.

Walker’s step-daughter and daughter said they didn’t know about the funeral until Monday morning, KXXV-TV reported late Monday. They were in the line of cars and missed the funeral.

"I turned the TV on and the second thing that came on the news was about a veteran being buried with no family and when they said the name and I saw the picture my heart just kind of dropped," said the step-daughter, Angela Sheffield.

She and Walker’s daughter, Plonie Williams, told the station they thought Walker had been buried in December without them present. They said he died of cancer.

Nevertheless, they said they were grateful for the outpouring of support Monday.

“Thank you so much. God bless you all," said Sheffield.

Williams and Sheffield were presented afterward with the American flag that draped Walker’s casket, according to the station.

Rodriguez said it was important to know Walker was beloved by his country.

“He may have left a stranger but because of that man, there were a lot of friendships built,” he said.