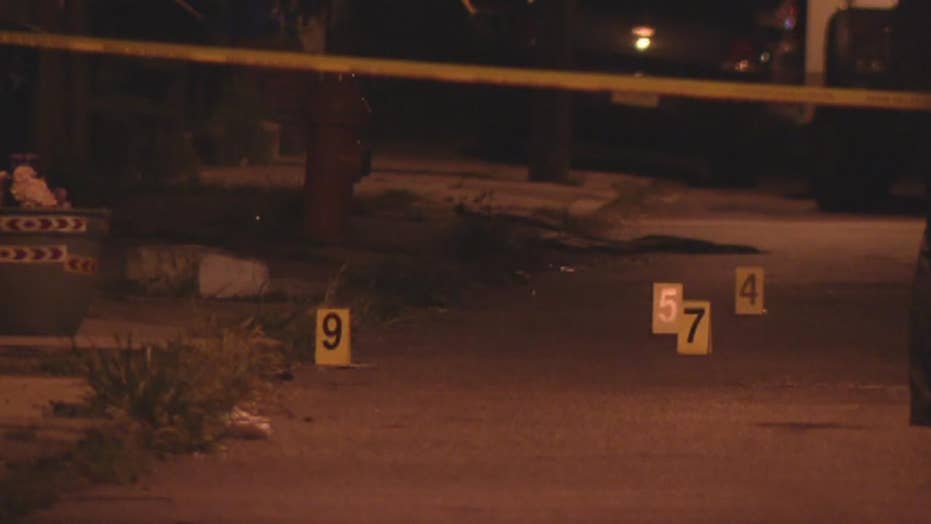 One killed, five others wounded in shooting during rap video production

Video: One dead, five others wounded in gun shooting that took place during a rap video production in southwest Philadelphia. Police say a 21-year-old was shot in the head and died at the scene.

One man was killed and five other people were injured when gunfire broke out moments before a rap video was set to be filmed Sunday night in Philadelphia, officials said.

Philadelphia police said the incident took place shortly after 8 p.m. on the 2600 block of Carroll Street in the southwest section of the city.

"I didn’t know what it was, I thought it was the TV or something," Chris Griffin told FOX29. "Once everybody ran into the kitchen and they didn't hear the shots anymore, they went to go check and see what it was. When they looked outside, all you just heard was my aunt scream."

Authorities said about 10 men were in the group getting ready to film the rap video when an unidentified gunman emerged from a black car and opened fire, WPVI-TV reported.

"They were about to shoot a rap video when someone, a couple of people, came and shot one or more or persons," Philadelphia Police Commissioner Richard Ross told reporters. "These all very young men. Sadly this is what we see over and over again, but, you know, hopefully, we'll get someone to step forward because these are the type of incidents where we do worry about retaliation."

One man was killed and five others were hurt in a shooting moments before a rap video was to be filmed in southwest Philadelphia on Sunday, according to police. (FOX29)

Two other people were listed in stable condition with undisclosed injuries at an area hospital.

Ross said no suspects are in custody, and the incident remains under investigation.

Police have not released any details about the group making the rap video.