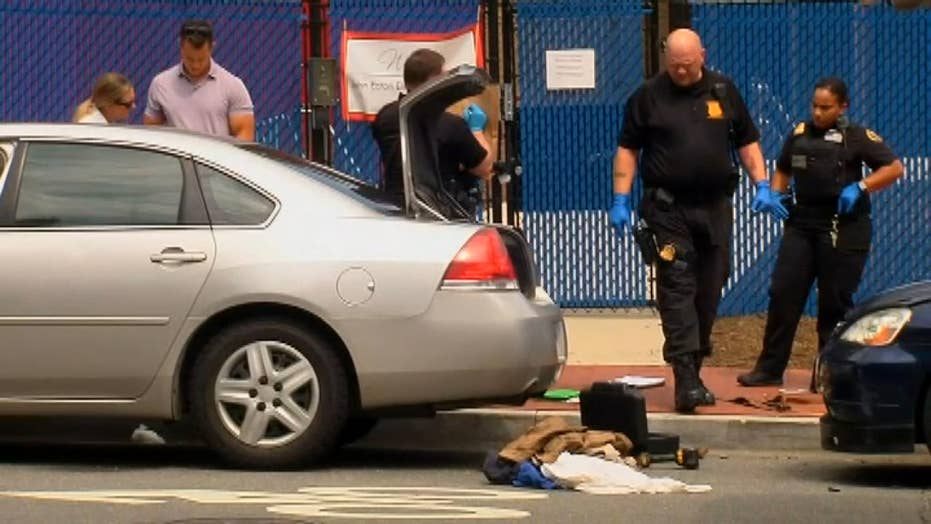 Washington DC police had to open up and inspect the contents of a mysterious package at the Israeli embassy today.

The Secret Service arrested a man who was wearing a bulletproof vest and carrying a knife outside the Israeli embassy in Washington, D.C., on Friday.

Officers responded to a reported of a suspicious person and vehicle in the area of the embassy at approximately 7:45 a.m. and saw the suspect was wearing a ballistic vest and had a folding knife in his pocket, according to the Metropolitan Police Department.

A police report said the man was "making nonsensical statements" while speaking to officers.

When officers located and searched the suspect's vehicle, they discovered ammunition. They seized a folding knife and two .223 Remington cartridges. The suspect was arrested for carrying a dangerous weapon and possession of unregistered ammunition.

Security at the Israeli Embassy had spotted the man Friday morning and noticed he was wearing what appeared to be a bulletproof vest and acting abnormally, although he did not act aggressively, they said. Embassy security then notified the Secret Service.

Streets around the embassy were blocked off for several hours.

The incident comes the same day that Rep. Rashida Tlaib, D-Mich., said she will not travel to the West Bank to visit her family there, despite getting permission from Israel’s interior minister.

Earlier this year, Israel said Tlaib and Rep. Ilhan Omar, D-Minn., could enter the country for an upcoming trip, which had been scheduled for this weekend. But Israel said Thursday the two women would not be allowed to enter due to their support of an anti-Israel boycott movement.

Israel later said Tlaib could enter the country to visit her grandmother, who is in her 90s.

President Trump had said it would show "great weakness" if Israel allowed Tlaib and Omar into the country.