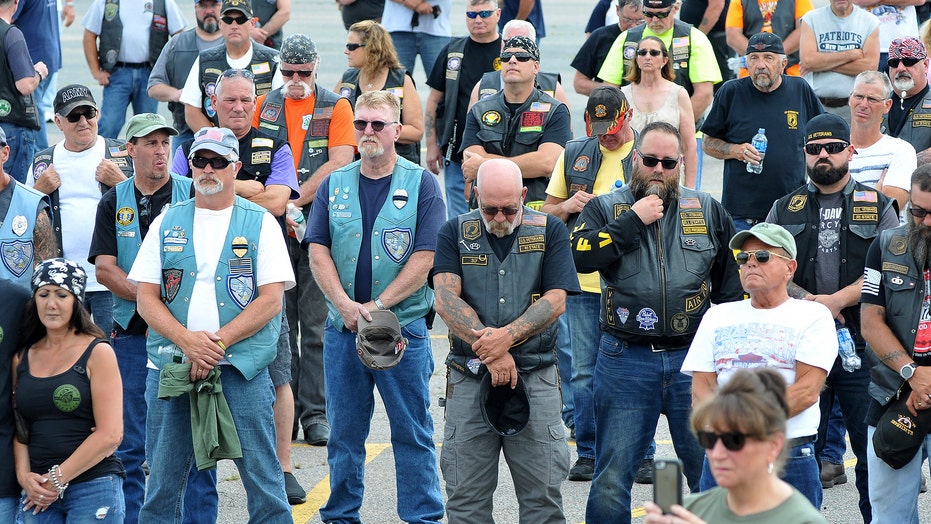 Kraft joined thousands of bikers at a memorial event for the victims outside Gillette Stadium in Foxborough, Mass. and pledged to donate the money to a GoFundMe page set up to assist the victims' families. All seven of those killed in the June 21 crash were members or supporters of the Jarheads, a New England motorcycle club that includes Marines and their spouses.

"The Jarheads are what makes America the greatest," Kraft told the crowd. "We are all Patriots and you are the true patriots."

Before the memorial, the campaign had already raised over $560,000. Kraft said if they did not reach their goal of $700,000 by the end of the day, he would match the difference.

Members of the U.S. Veterans Motorcycle Club salute the flag during the playing of the National Anthem. (Mark Stockwell/The Sun Chronicle via AP)

Manny Ribeiro, Jarheads president and crash survivor, said the weeks since the crash have been "awful" but the "unwavering support" has helped the group and the biker community through the tragedy.

"This event would not have come together without Mr. Kraft," he said over the sound of live music and roaring motorcycles. Some bikers came to the event from as far afield as Arizona and Louisiana.

George Loring, another Jarheads member, said the support helps, but "it doesn't stop the tears."

"Every motorcyclist here is here to support those who have died and those who are injured and hopefully their presence today will help everybody heal," said Loring, who was yards away from the crash.

"It's the hardest thing I’ve ever gone through in my life," Michael Ferazzi's son Matthew told Boston 25 News. "I think it would be for everyone. How can it not be? "It’s all I think about. It's all we think about. We miss him."

The pickup driver, Volodymyr Zhukovskyy, 23, pleaded not guilty to negligent homicide and remains behind bars.

Connecticut officials twice alerted Massachusetts about a drunken driving arrest against Zhukovskyy. Despite the alerts, Massachusetts failed to suspend his license.