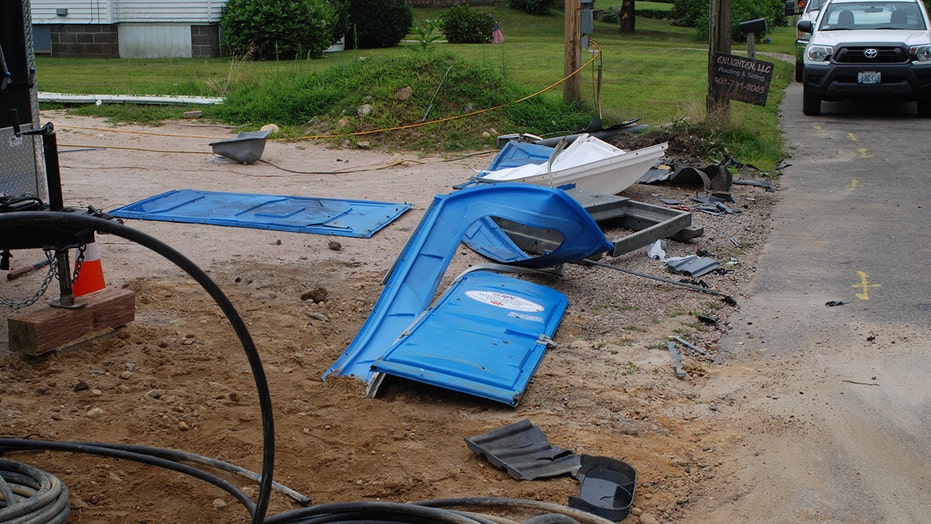 Authorities in Rhode Island are trying to figure out who set off explosives inside a pair of portable toilets over the weekend, leaving the thrones blown to pieces in two towns.

The Rhode Island Fire Marshal said the incidents both took place on Saturday in the towns of Westerly and Charlestown.

The first blast was reported at about 12:30 a.m. Saturday at a residential construction site in the coastal town of Westerly.

MAN IN NYC KILLED WHEN ELEVATOR DROPS, CRUSHES HIM BETWEEN SHAFT AND WALL: REPORT

“I’ve seen many other things happen to port-a-potties but never an explosion,” Jason Mottle, who has been working the construction site, told WPRI-TV. “The port-a-potty was blown up into a million pieces.”

The first explosion was reported around 12:30 a.m. on Aug. 17 in the town of Westerly, Rhode Island, according to officials. (Rhode Island Fire Marshal)

The second incident was reported hours later in a private parking lot in Charlestown. A fisherman reported hearing an explosion at about 11 p.m. Saturday, but the damage was not reported until Sunday morning.

There were no reports of injuries in either explosion

The second blast was reported around 11 p.m. on Saturday in the town of Charlestown, R.I., according to fire officials. (Rhode Island Fire Marshal)

The state bomb squad, which is overseen by Office of the State Fire Marshal, is now investigating, according to officials. The Rhode Island fire marshal is also offering a $5,000 reward for information that leads to the arrest and conviction of whomever is responsible for the blasts.