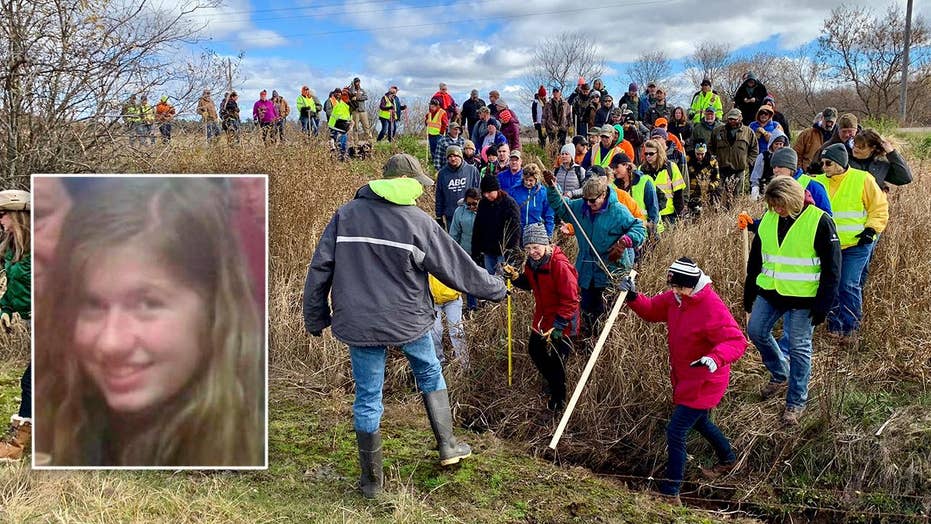 FBI offering a $25,000 reward for information leading to whereabouts of Jayme Closs. Matt Finn has the story.

The reward for information leading to the location of Jayme Closs, the 13-year-old Wisconsin girl who disappeared nearly two weeks ago after her parents were found dead in their home, doubled Saturday as family and friends gathered to pay their respects to the couple.

Closs disappeared on Oct. 15 after her parents — James Closs, 56, and Denise Closs, 46 — were found dead in their Barron County home.

The Barron County Sheriff's Department said as of Saturday, investigators have received more than 1,900 tips and closed at least 1,700 of them as investigators work on the case.

"There is a tip out there that will break this case; keep them coming in," Sheriff Chris Fitzgerald said in a statement. "Thank you again for the community support behind the law enforcement effort on this case."

Jayme Closs, 13, has been missing since Oct. 15 when her parents were found dead inside their Wisconsin home. (Barron County Sheriff's Office)

The reward doubled to $50,000 just two days after investigators announced an initial $25,000 reward alongside members of Jayme’s family. Fitzgerald said the Jennie-O Turkey Store worked with authorities to raise the amount of the reward. Jayme's parents, Denise and James, who were shot dead in the incident, both worked at Jennie-O, according to FOX9.

The more substantial reward came as a joint funeral service was held at St. Peter’s Catholic Church in Cameron, Wis., on Saturday. A private burial is scheduled for a later date, according to an obituary posted by Rausch and Steel Funeral Home in Barron.

Authorities are still searching for the missing Wisconsin teenager and encourage anyone with information to come forward.

"James loved the Green Bay Packers and the Wisconsin Badgers and getting into conversations on the 'glory days' of his high school sports career," the obituary reads. "Denise loved working with her flowers, feeding her birds, she loved angels and helping everyone, any way she could."

One funeral attendee, Missy Ruffin, told WEAU-TV she worked with James for 15 years and that the couple were "ordinary people" and was stunned by the killings.

“They go to work and they go home,” Ruffin told the television station. “They’re about their family, so why?”

Last week, officials said that two cars were "seen in the area" of the Closs home at the time of the fatal shootings. Investigators believe a red or orange Dodge Challenger made between the years 2008 and 2014 might be linked to the incident. Another vehicle — either a Black Ford Edge, made between 2006 and 2010, or a Black Acura MDX made between 2004 to 2010 — is also of interest.

The sheriff's department said that it received a 911 call from an unknown person at a home in Barron around 12:58 a.m. on Oct. 15. The caller didn’t communicate with police, but noises heard in the background suggested a disturbance or struggle of some kind.

Police said officers arrived at the home in less than 4 minutes after the 911 call ended – but Jayme, along with the gun used in the murders, was gone.

"Just makes you wonder," Jay Frank, who lives near the Closs home, previously told Fox News. "You know you got to be sure your doors are locked all the time now, I guess."

"If you don’t find something the first couple days you get pretty worried all the time," Frank added.

Jayme Closs is now leading the FBI's kidnapping and missing person's list, as a nationwide search for the teenager continues. Those with information on Closs' disappearance or whereabouts are encouraged to contact the Barron County Sheriff's Office tip line at 715-537-3106.