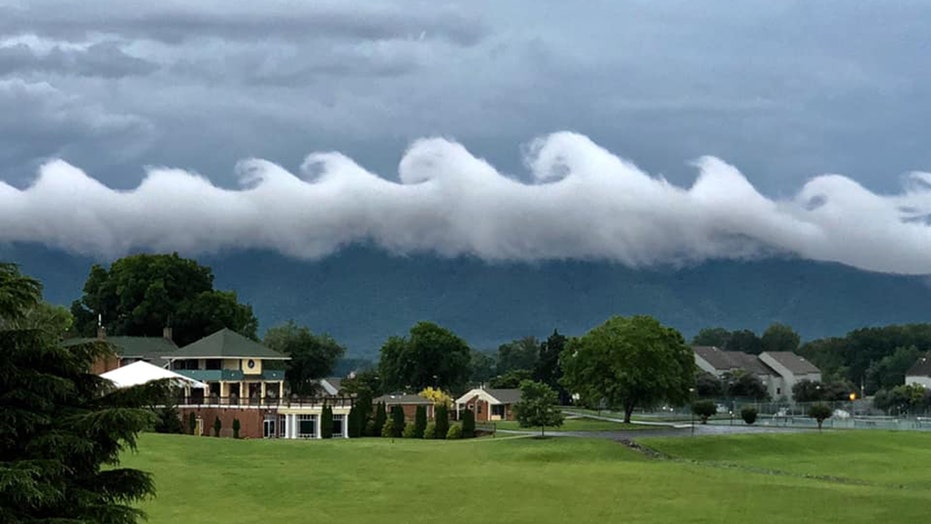 These clouds were literally rolling in.

A woman in Virginia captured the moment earlier this week when a rare cloud formation was spotted in the skies near Roanoke.

Amy Christie Hunter, who takes landscape photos as a hobby, said her "jaw dropped" when she spotted the clouds rolling over Smith Mountain on Tuesday.

"I wasn’t chasing any weather, it just appeared right before my eyes," she told Fox News. "It was a once in a lifetime moment for sure!"

Hunter said the moment happened so quickly, she barely had enough time to grab her phone to snap a picture. She then posted the photo to Facebook, which went viral.

Rare wave-shaped clouds were spotted in the skies over Virginia on Tuesday near Roanoke. (Amy Christie Hunter)

The clouds that Hunter spotted are known as Kelvin-Helmholtz Wave Clouds, which National Weather Service says are "vertical waves in the air associated with wind shear across statically-stable regions."

The clouds "can appear as breaking waves and as braided patterns in radar images and cloud photos," according to the NWS.

The waves in the cloud are also an indication of severe wind shear, according to the forecasters.

"An extremely rare phenomenon where a cloud produces a billowing wave pattern," the U.K.'s Met Office notes. "They occur when there is a strong vertical shear between two air streams causing winds to blow faster at the upper level than at the lower levels."

The clouds are more likely to appear on windy days and are often "good indicators" of possible aircraft turbulence.