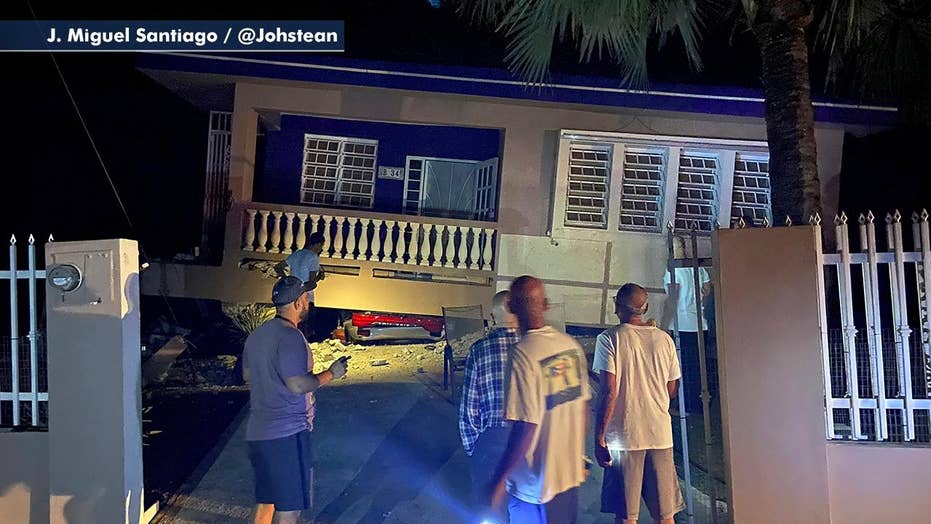 Schools across Puerto Rico remained closed on Wednesday as more than a half-million people remained without electricity after the island's worst earthquake in a century.

President Trump declared an emergency, freeing up federal funds, and Puerto Rico Gov. Wanda Vázquez activated the National Guard after the magnitude 6.4 quake struck Tuesday, killing one person and injuring nine others while knocking out power across the U.S. territory. Vázquez, who also declared a state of emergency, said power should return to most of the island in 24 to 48 hours.

“All of Puerto Rico has seen the devastation of this earthquake,” Vázquez told reporters.

Some Puerto Ricans in the hard-hit south area of the island in towns such as Guánica moved beds outside Tuesday night over concerns their homes would collapse if another earthquake hit. The flurry of quakes in Puerto Rico's southern region began the night of Dec. 28.

96 years-old Martin Velez gets placed in a bed by neighbors outside a shelter afraid of aftershocks, after an earthquake in Guanica, Puerto Rico, Tuesday, Jan. 7, 2020. (AP Photo/Carlos Giusti)

In Guánica, more than 200 people took shelter in a gymnasium after a quake Monday, only for the latest temblor on Tuesday to damage that structure — forcing them to sleep outside.

“There's no power. There's no water. There is nothing. This is horrible,” Lupita Martínez, 80, told the Associated Press as she sat in the parking lot with her 96-year-old husband.

While officials said it was too early to estimate the total damage caused by the string of quakes, hundreds of homes and businesses in the southwest region were damaged or destroyed. In Guánica, a town of roughly 15,000 people, nearly 150 homes were affected by the quake, along with three schools, including a three-story structure where two floors were completely flattened.

Tuesday's quake was the strongest to hit Puerto Rico since October 1918, when a magnitude 7.3 quake struck near the island’s northwest coast, unleashing a tsunami and killing 116 people.

Nearly all of the island’s more than 3 million people lost power and only 100,000 customers had energy by late Tuesday night, according to the AEE electricity authority.

Puerto Rico’s southern coast was hit with a 6.5 magnitude earthquake. The quakes have been regularly occurring since December 28 and now an island-wide blackout is being reported.

The agency scrambled to restart power plants that automatically shut down for safety during the quake. The large Costa Sur plant suffered “severe damage” and was put out of service, Vázquez said.

Authorities said they were working on how to shelter people as they handed out blankets, food, and water to families gathered at the gymnasium in Guánica for the second night in a row.

Many who spent the night sleeping in their cars or outside said they were used to hurricanes, but nothing like what has been happening.

“There’s a lot of uncertainty, this is the first time this has happened to us,” Patricia Alonso told Reuters as she was heading to her mother's apartment building because it had a generator.

The U.S. Geologic Survey said that while it’s virtually certain there will be many aftershocks in the next week, the chance of a magnitude 6 quake -- similar to Tuesday’s -- or stronger is around 22 percent.

Puerto Rico is still recovering from when Hurricane Maria hit in 2017, causing an estimated 2,975 deaths and more than $100 billion in estimated damage. The island is also working through a bankruptcy process to restructure about $120 billion of debt and pension obligations.