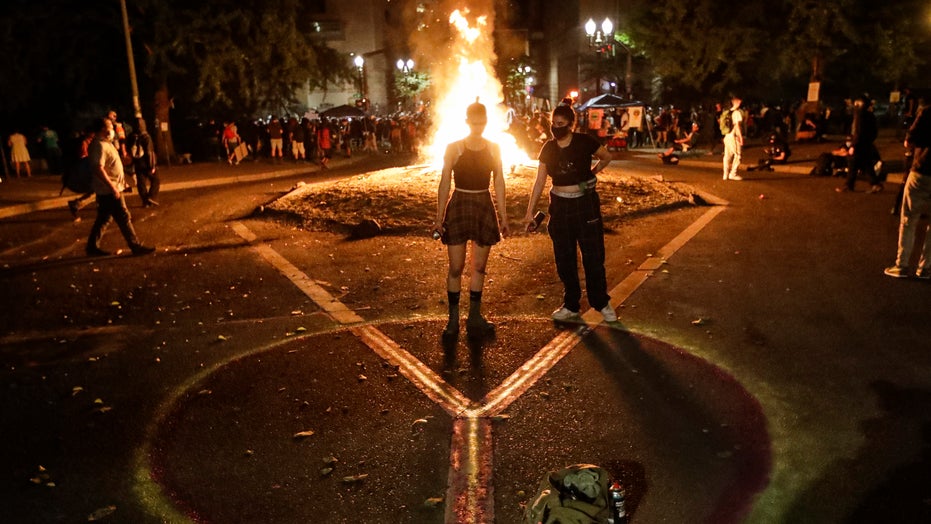 Documentary filmmaker travels to Portland to see if protests are peaceful or not.

Horowitz, who previously covered the Minneapolis protests in the wake of George Floyd's death and Seattle's Capitol Hill Organized Protest area, spoke to demonstrators who have protesting for weeks outside Portland's Mark O. Hatfield U.S. Courthouse, at one point vandalizing and attempting to set the building on fire. They were also seen throwing knives and using fireworks against federal law enforcement sent to defend the building.

According to Horowitz, they aim "to encourage societal breakdown" so they can rebuild it.

"I saw many members of the press who had their cameras down when the protesters/rioters were ravaging the federal building, but when the federal agents came out of the courthouse, all of the sudden, their cameras are rolling," the filmmaker told Fox News.

In a pair of tweets Monday night, President Trump slammed "deranged Anarchists & Agitators" rioting in Portland and other cities, while claiming that if presumptive Democratic nominee Joe Biden wins the November election, the country would descend into chaos.

Demonstrators draw a peace sign in front of a fire during a Black Lives Matter protest at the Mark O. Hatfield United States Courthouse Tuesday, July 28, 2020, in Portland, Ore.  (AP)

Howowitz went on to say: "Many of them were hardcore rioters who were using pipes, hammers, and even golf clubs to break down the protective shielding of the building and to bust through," he explained. "They repeatedly used incendiary devices in order to create multiple fires in the hope of burning the building down and everyone inside."

INSIDE NIGHTLY SIEGE FACED BY FEDS IN PORTLAND: REPORTERS DETAIL ATTACKS ON OFFICERS

The "U.N. Me" filmmaker, who has previously produced "Ami on the Streets" segments for Fox News Channel about Black Lives Matter and other issues, said that, when he was there, the Portland crowd encouraged the mayhem and not a single protester discouraged the rioters.

"Only when the federal building was in danger of burning down and its occupants were threatened, did the federal officers come out to extinguish the threat and did so as humanely possible, using tear gas, pepper spray, and other non-lethal means, even after they were attacked with glass, bottles and rocks," he said.

Portland's City Council has banned its police from working with federal law enforcement.

"At one point I was hit by a propelled gas canister. There were groups of people interrogating journalists. They warned me that if I portrayed the protesters in a negative light, I would face 'street justice,'" Horowitz said. "And after being recognized, I was pelted with broken glass."

A protester told him chaos was a "useful tool" and another said he "strongly" felt the need to declare "a revolutionary war."

One protester said, "I think that we have to burn it down," in reference to the American experiment.

PROTESTS FLARE UP IN TEMPE, ARIZ., AND AUSTIN, TEXAS - AS PORTLAND SEES ITS 61ST CONSECUTIVE NIGHT OF UNREST

When Horowitz asked if violence was needed, a female protester responded: "You gotta have violence."

"There's four levels of protest," the Black woman explained. "Looting and rioting is part of protesting. So yes, I do agree that it needs to be there."

"This is us taking the high road," another woman said. "This is us not creating groups to kill off and assassinate the people that are doing the same to us," a masked woman told him. "This is us just trying to create a world filled with love and kill off the hate."

But not everyone there agreed with the violence.

"I don't think y'all really know what you're fighting for," a Black man told Horowitz, pointing out that only "two percent" of the protesters were Black.

"And then when everybody gets to go home, we stay Black," he said, "and we get blamed for your Black Lives f---ing Matter ... this is B.S."

Mayor Wheeler, along with the Democratic mayors of other cities stricken by violence in recent weeks, signed a letter to congressional leaders Monday that demanded they pass a bill banning the Trump administration from sending federal officers to cities without local consent.

"[W]e are outraged that the administration has responded to these First Amendment-protected gathering by authorizing the deployment of riot-gear-clad forces to Washington, D.C., Portland, Seattle and other communities across the country without the consent of local authorities," the letter read. "As demonstrated now in Portland, these federal forces have used the pretext of protecting federal property to also patrol streets, way outside of their lawful jurisdiction, arrest residents without cause and trample on Constitutional rights."