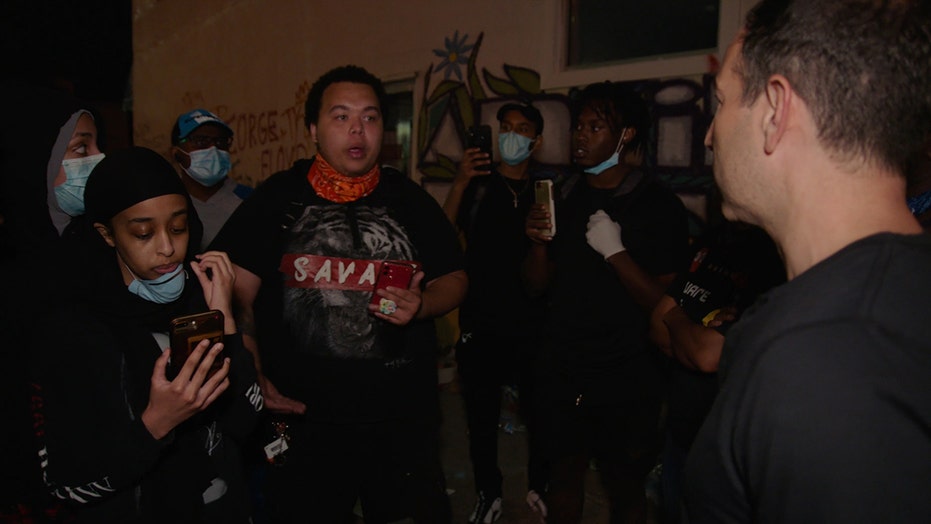 Horowitz, who previously covered police protests in Ferguson, Mo., in 2014, spoke to "peaceful protesters" Sunday night in the city where George Floyd died while in police custody on Memorial Day. He found that, while they acted peacefully, they supported the looting and violence that started there and continued in other cities.

"What I saw was really shocking," Horowitz told Fox News. "It was a city on fire and full of chaos. Anarchy was reigning across the streets, and you saw police officers chasing roving bandits all over the city."

A protester carries the carries a U.S. flag upside, a sign of distress, next to a burning building May 28, in Minneapolis. (AP Photo/Julio Cortez)

The "U.N. Me" filmmaker who has previously produced "Ami on the Streets" segments for Fox News Channel about Black Lives Matter and other issues said he wanted to get to the truth about the protesters.

He said the mainstream media in their coverage of the protests and riots never asked the right questions because they were afraid to hear their answers.

"We're attacking big, known businesses like Apple, Boost ... Target, Walmart, Best Buy, all that s--t, Gucci ... Whatever the f--k you all like, you better lock your doors!" one protester tells him in the video. This protester calls the looting "slavery money ... So when we take it back or we burn it down, yeah. We're getting back what's ours. You won't give it up? Okay, you ain't having it no more."

Another added, "If anybody's a thief, it's America."

The filmmaker asked if they supported the violence and wanted to see stores burned down.

"If they didn't kill a black man, their stores wouldn't get burned down," one said.

"Sometimes we gotta act out. It sucks that all this happening, that all the small businesses are getting burnt down, but without that, where would we be?" a protester tells him. "The FBI came here in three days because we're rioting, because we're tearing s--t up."

Another says, "This country was built on violence and when people have had enough of the violence that y'all have against us, and we give it back to y'all, y'all wanna be mad."

When Horowitz asks if the U.S. should defund the cops, a protester replies: "I think we should kill them b--ches."

A protester runs past burning cars and buildings on Chicago Avenue, May 30, in St. Paul, Minn. (AP Photo/John Minchillo)

"I want to be abundantly clear," Horowitz said. "I support their right to protest. My point isn't to say they shouldn't have been there. My point is to say those particular protesters support the violence happening across the country. That view gives the anarchist rioters the air to breathe -- to keep that fire burning."

As Horowitz was packing up for the night, he saw a man defending his home from being looted and burned. Another man took a thick stick, and started attacking him and throwing rocks at him: "It looked to me that if he continued that he would've killed this guy."

Horowitz said he approached the man with the stick and yelled to him. "Luckily, he walked away."

Horowitz and his crew witnessed at least five cars burned by rioters and three stores looted after rocks were thrown through windows. "I saw a lot of violence just driving through the streets," he said.

He also saw a group of Native Americans gather before curfew to protect Native American-owned stores after a number were looted and burned the night before.

Documentary filmmaker Ami Horowitz speaks in front of protests in Minneapolis, on May 31. (Courtesy of Ami Horowitz)

"This is coming on the back of the coronavirus when they were already barely making it, on the verge of losing their businesses," he said. "It was really sad. It was heartbreaking."

"I've witnessed it twice now and I worry about this country a lot more than I used to."

Horowitz has previously filmed an expose on the United Nations' inability to live up to its stated purpose and founding ideals of a more peaceful world. Another video led to an executive order by President Trump. He taped a Middle East conference co-hosted by Duke University and UNC-Chapel Hill that was paid for in large part by the government. During the event, a rapper performed an anti-Semitic song. The Department of Education issued a lawsuit against the universities and Trump signed an order against anti-Semitism on college campuses.

And in Dec. 2016, he investigated an influx of refugees in Sweden, telling "Tucker Carlson Tonight" that, according to the country's statistics murder increased between 2012 and 2016 by "almost 70 percent" and rape similarly increased between 2007 and 2015. Trump referenced it at a Florida event in 2017.

Horowitz said he and his crew were threatened at least twice in Minneapolis.

"My biggest takeaway is the media malpractice on how these protests are being reported as if they have nothing to do with the violence," he said. "The reality is different in that the protesters are justifying the violence and the anarchy and the rage."

After two nights of witnessing riots, he said he thought both the police and national guard were acting with incredible restraint.

"One might argue too much restraint. They were trying to be as understanding as possible," Horowitz said. "It was probably an overcorrection from the criticism they were getting before. ... The protesters were goading them into attacking the crowd, but both the police and national guard wouldn't take their bait."

"These crowds and protests are trying to make out that our country is fundamentally racist. I find that so offensive that they would have that viewpoint," he noted. "The truth is that they are just wrong and the data does not support their argument."