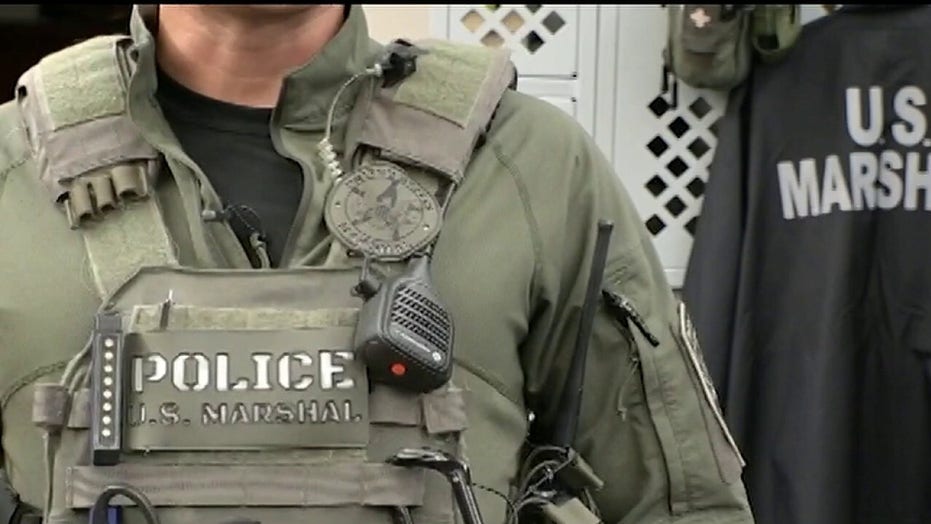 Reporters are starting to get a more detailed and startling picture of the risks that federal law enforcement are dealing with in securing a courthouse amid raging protests and unrest in Portland.

Fox News' William La Jeunesse spent a night inside the courthouse on Monday evening, obtaining striking footage of the battle between rioters and the protective-gear-clad federal agents.

"Critics say these feds are stifling free speech. The fact is no one is stopping anyone from protesting provided they don't try to burn the building down," La Jeunesse said on "America's Newsroom" Tuesday morning. "And that's what happened around 11 p.m. The peaceful protesters had left. The agitators, the rioters were there. They set a fire to draw the agents out then they pelt them with cans and rocks and bottles."

Mike Balsamo, the Associated Press' lead Justice Department and federal law enforcement reporter, also detailed in a viral thread on Monday morning his own experience embedded with federal law enforcement at the Mike O. Hatfield Federal Courthouse in Portland, which has been the subject of anti-police protests that in recent days have increasingly morphed into riots after dark.

Balsamo gave a firsthand account of the attacks federal officers in the courthouse face on a nightly basis and highlighted the experience of the officers, most of whom he reported live in the Portland area, under siege in their own city.

"I spent the weekend inside the Portland federal courthouse w/ the US Marshals," Balsamo tweeted, along with a story he had written with AP reporter Gillian Flaccus, who covered the unrest from outside the courthouse. "Mortars were being fired off repeatedly, fireworks & flares shot into the lobby, frozen bottles, concrete, cans & bouncy balls regularly whizzed over the fence at high speeds."

"I watched as injured officers were hauled inside. In one case, the commercial firework came over so fast the officer didn’t have time to respond. It burned through his sleeves & he had bloody gashes on both forearms. Another had a concussion from being hit in the head w/ a mortar," he said, referring to commercial-grade fireworks that are fired at officers by rioters.

Balsamo also detailed how officers are the subject of regular laser attacks from outside the courthouse and said that three officers were still suffering damage to their vision after having the lasers shined in their eyes.

"The officers outside the Portland courthouse have been hit by an array of objects from canned food to ball bearings fired from slingshots," he added. "On Saturday night, a DHS officer was soaked completely in orange paint thrown from one of many paint cans later seized by authorities."

The violence of the rioters outside the courthouse had been previously reported by other reporters who had been stationed there. As had the effects of the tactics the federal officers use on the rioters to protect the courthouse from attempts to vandalize and burn it. The AP story documented both -- from a young woman in a halter top throwing up in a gutter due to tear gas to the power tools, fireworks and more used by rioters as they tried to get inside the fenced perimeter.

But what the AP story captured that previously was not reported was the personal experience of the federal agents inside the courthouse.

Balsamo noted the sentiment among the marshals in a separate tweet.

"It was really striking talking to the Deputy US Marshals who have been working to protect the courthouse for weeks. Many are from Portland. They have friends who peacefully protest during the day, but at night, they say demonstrations are hijacked by agitators set on violence," he said.

Balsamo was largely praised for the report at a time when many reports have been critical of law enforcement.

"Must-read thread," Department of Justice spokeswoman Kerri Kupec tweeted. "AP’s @MikeBalsamo1 spent the weekend inside the courthouse that has been under attack. Read his thread to see what he observed. (And, thank you to Mike and AP for being a news org willing to cover the full picture of what’s actually happening in #Portland.)"

But freelance journalist Mike Bivins slammed the AP story as too sympathetic to the federal agents.

"surely (sic) a coincidence that this AP fed stenographer has as his background pic a photo of he and [Attorney General Bill B]arr," Bivins said in a tweet that included a screenshot of Balsamo's Twitter profile. "that (sic) fed sympathy piece surely couldn’t have anything to do with the ancient tradition of access journalism."

In another post, he added: "excellent work with this thread, fed stenographer."

Balsamo closed by noting that the federal officers are not considering turning the courthouse over to rioters, saying that they "feel a personal & professional duty to protect the courthouse. Many raised the same point — the courthouse stands for justice, for all people. And they aren’t going anywhere."

One federal official who spoke to Fox News' La Jeuenesse also said the officers were not going to back off until the courthouse is no longer under attack.

"If the big one is 'we want feds out,' then just leave the building alone so we can leave," one Deputy U.S. Marshal told La Jeunesse. "We're not leaving until we know that this building's safe."