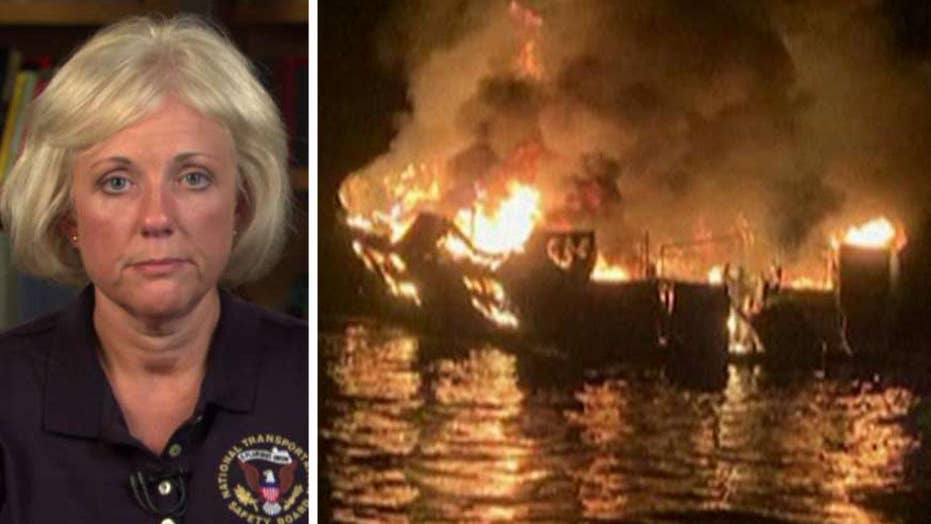 Jennifer Homendy joins Harris Faulkner on 'Outnumbered Overtime' to discuss her tour of a similar vessel to the Conception.

A preliminary investigation into a Southern California dive boat fire that killed 34 people off the coast of Santa Barbara is raising concerns over safety flaws on the vessel, according to a report.

The Conception lacked a “roaming night watchman” who would stay awake to warn sleeping passengers of hazards, multiple law enforcement sources who spoke on condition of anonymity reportedly told the Los Angeles Times.

The investigation also questioned whether the crew was adequately trained in case of fire or if the passengers were given a safety briefing.

Jennifer Homendy, who is overseeing the National Transportation Safety Board's investigation, said one of the surviving crewmembers told investigators he didn’t hear a smoke alarm, The Times reported. The crew member described the alarm as “one that can be bought at Home Depot” but may not have been “wired to a centralized system with alarms,” which was not required at the time the boat was built.

Homendy toured a boat similar to the Conception this week.

She said that it was hard to see in the bunk room with the lights off and "difficult to maneuver" to the escape hatch.

Sources emphasized the investigation was in its early stages and could take months or years to complete.

The NTSB is also looking into the wiring and electrical systems onboard the vessel. "Did that provide the ignition source? But we’re not closing in on that,” Homendy told The Times. “We’re not ruling out anything at this point.”

The five surviving crew members reportedly told investigators the fire was too intense to save any of the passengers sleeping below deck.