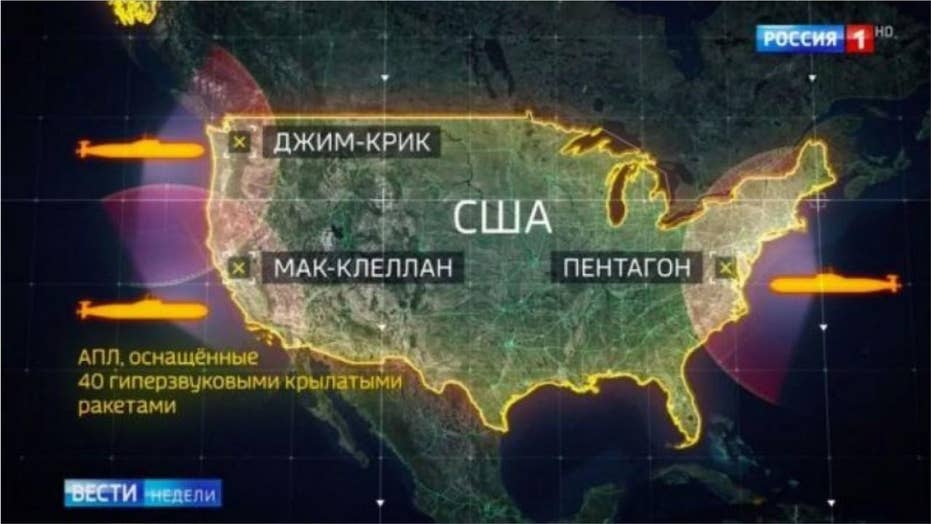 Russian state TV listed potential targets in the U.S. in the event of a nuclear strike and claimed that its new hypersonic missile technology could reach them in less than five minutes.

One of the military bases Russian state TV claims is a potential target if the Kremlin ever launched a nuke at the United States has been shuttered for decades -- but its deep connections to a nearby, secretive mountain bunker dubbed the “underground Pentagon” may be why it's on Russia's radar.

The graphic of alleged targets throughout the U.S. homeland shown on the broadcast Sunday also featured well-known sites, such as the Pentagon and Camp David. But it's the obscure selections -- like a Navy communications facility outside of Seattle staffed by only 21 people -- that have garnered most interest. Maryland’s Fort Ritchie appears to be the most baffling potential target...until you notice its proximity and relation to Raven Rock Mountain Complex, believed to be where the U.S. government would set up operations in the event of a catastrophic attack on the nation’s capital.

"Everyone knows the mountain is there," Robert Stanley, the mayor of Fairfield, Pennsylvania – a borough down the street from the classified site – told FOX43 in an interview last year, but "most people have no idea what’s inside."

One of the tunnels leading inside the Raven Rock Mountain Complex in Liberty Township, Pennsylvania. The site is linked to a former military base mentioned in a Russian state TV broadcast this week as being a potential target in the U.S. in the event of a nuclear strike. (Google Earth)

Raven Rock Mountain Complex, which the military also calls “Site R”, was originally built during the onset of the Cold War and took on the nickname of “Harry’s Hole”, a moniker Stanley says is in reference to former President Harry Truman.

It’s located right next to the Pennsylvania-Maryland border and is only about six miles from Camp David. Fort Ritchie, which the military says trained troops during World War II and later pivoted to supporting Site R as its “primary mission,” lies even closer. Ritchie was closed down in 1998 and, since then, despite containing a number of signature stone buildings, the fort has attracted few suitors for a redevelopment of its 600 acres due to its remote nature and crumbling infrastructure, reports say.

Yet Raven Rock remains an active Defense Department site and is said to have been a place where former Vice President Dick Cheney set up shop in the aftermath of the Sept. 11, 2001 terrorist attacks. FOX43 reported that, just last year, the facility received around $45 million in government funding for its upkeep.

Sporadic news articles, books and other forms of research have offered clues over the years as to what exactly is inside Raven Rock, frequently called the “underground Pentagon.”

A 1991 article in the Pittsburgh Press says the bunker complex has 265,000 square feet of operating space -- complete with a fitness center and barbershop -- in addition to its own reservoir, which is capable of holding millions of gallons of water. A local resident quoted in the article described what happens on the 1,529-foot mountain as being "like a James Bond movie."

A stone castle-shaped building at the Fort Ritchie site in northern Maryland. The fort was shut down in 1998 as a result of base realignment. (iStock)

Garrett Graff, the author of “Raven Rock: The Story of the U.S. Government's Secret Plan to Save Itself -- While the Rest of Us Die”, told Philly Voice in 2017 that the bunker also has "everything else you would find in a normal small city." He added 100 people work there normally, but the site has enough room for up to 5,000 personnel – if staffing levels need to reach that point.

From the surface on Google Maps, a fire station and at least four tunnels leading into the mountain are visible. But if civilians try to drive along one of the Liberty Township roads leading to the site’s entrance gates, they can only go as far as the signs that warn them of a “restricted area."

One of the access roads leading up to the summit of Raven Rock mountain. (Google Maps)

“This installation has been declared a restricted area according to a Secretary of Defense directive issued 20 August 1954,” the signs read, adding “unauthorized entry is prohibited”.

In the wake of th\is week's Russian state TV broadcast of the alleged targets, a spokesman for Russian President Vladimir Putin tried to downplay its significance, insisting the leader did not name any “geographic site Russian missiles” might be aimed at. The spokesman also claimed the Kremlin does not interfere with news programs.

The report came days after Putin warned the U.S. against deploying intermediate-range missiles in Europe.

What is happening inside Raven Rock right now, near two of the sites mentioned in the broadcast, remains unknown. And according to a Defense Department document obtained by Sharon Weinberger, co-author of the 2018 book “A Nuclear Family Vacation: Travels in the World of Atomic Weaponry”, the government wants it to stay that way.

“Remember,” the document says, “the more the public knows about this facility, the more our adversaries do, and the more vulnerable we become.”