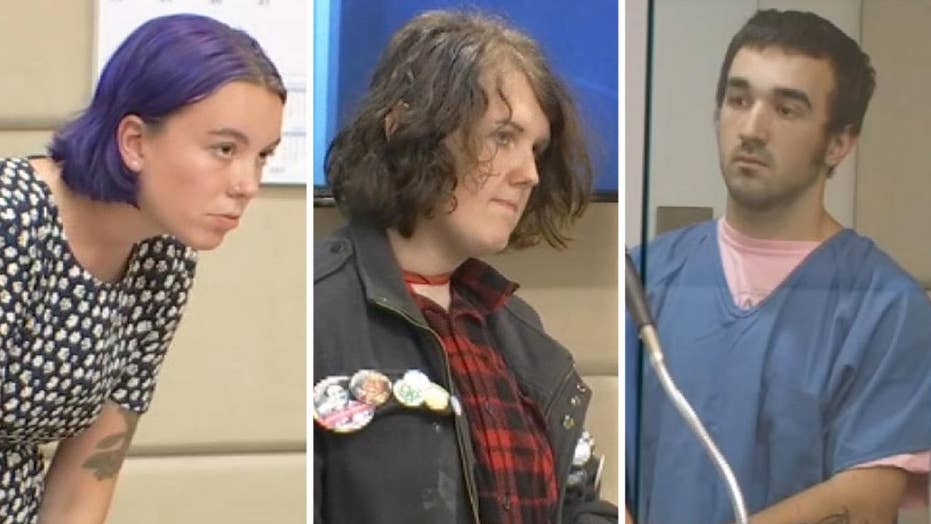 Officials work to identify additional suspects believe to be involved in crimes during protests that turned violent in downtown Portland.

Authorities in Oregon released images of suspects involved in the Antifa-led attacks last weekend that injured several conservative demonstrators -- and at least one journalist -- as the head of Portland's police union told the city's mayor on Monday that "enough is enough."

The Portland Police Bureau said several assaults happened Saturday as members of Antifa and other leftist groups were seen on video beating, berating and hurling objects at members of the rightwing Proud Boys group and other conservatives protesters in downtown Portland. A total of eight people were treated by medics, including three police officers, and three people were hospitalized, officials said.

One of those injured included conservative writer Andy Ngo, who works for the website Quillette and writes regularly about Antifa. Ngo posted a photo of himself from a hospital, with bruises, cuts, and scratches on his face.

The violent demonstrations and the injuries associated with them have elicited outrage across the country, with Sen. Ted Cruz, R-Texas, saying Portland Mayor Ted Wheeler -- who also serves as police commissioner -- should be investigated by federal law enforcement officials.

Wheeler responded to Cruz's claims the mayor "ordered his police officers to let citizens be attacked by domestic terrorists" by tweeting "I ordered no such thing."

In a separate lengthy statement posted to Twitter, Wheeler called the violence "unacceptable" and added "we stand against all forms of violence - regardless of someone’s political leanings."

"Portland has always been a beacon of free speech. We are proud of that history. But in the last couple of years, some have increasingly used their opportunity to exercise their 1st amendment rights, as an opportunity to incite violence," the mayor said.

He also defended the actions of police during the demonstrations, saying those officers have the "unenviable task of keeping the peace."

"It’s a difficult job and hard decisions are made in real-time," he said. "While we continue to learn more about what transpired over the weekend, we will keep you informed. We will do everything we can to make sure that those who have committed violence are held accountable."

The head of the city's police union said in a statement posted to Facebook that officers worked to ensure the community "can peacefully protest without fear of violence" -- before adding "but right now our hands are tied."

"It doesn’t matter if our citizens are Democrats or Republicans; no one should be attacked in the streets of our city. Good leadership means taking the reins and stepping forward to let people know when there is wrongdoing," Portland Police Association Daryl Turner said in a statement. "The law is applicable no matter which side you’re on."

Turner also took a swipe at Wheeler, saying the incident was the "perfect example of Portland politics at work"

"Where are the voices condemning the lawlessness and violence? If this violence had been directed at Antifa, there would have been an immediate call for an independent, outside investigation," Turner said in part, adding, "It’s time for our Mayor to do two things: tell both ANTIFA and Proud Boys that our City will not accept violence in our City and remove the handcuffs from our officers and let them stop the violence through strong and swift enforcement action. Enough is enough."

Portland police said on Monday that a number people in the crowd concealed and brandished weapons, including "batons, projectiles, and firearms."

"Attempts were made to effect arrests when possible and resources were available," police said in a news release. "The presence of weapons in the crowd and assaults on police officers were factors taken into consideration in how to safely and effectively manage a situation that turned into civil disorder."

Police released photographs of three suspects wanted for robbery and assault in connection to the clashes on Saturday.

Images of three suspects wanted for robbery and assault in connection to the violent protests in Portland on Saturday. (Portland Police Bureau)

One of the suspects is a shirtless male whose face is clearly visible, while the other two are identified by police as a male and female but who are wearing all black with their faces covered. Police added that, according to Oregon Revised Statute, 181A.250, law enforcement is unable to record demonstration events unless there is criminal activity occurring.

"There is no current law or ordinance prohibiting covering of the face in a protest and commission of a crime, which makes it more difficult for investigators to identify perpetrators of violence," the PPB said. "This is exploited by criminals who engage in acts of violence."

Authorities also addressed the reports of individuals throwing "milkshakes" with a substance mixed in that was similar to quick-drying cement. The PPB said that before the demonstrations, the agency received information that some participants planned to throw "milkshakes" at others.

"As the event progressed, officers learned from some participants that a substance similar to quick drying concrete was being added to some of the 'milkshakes,'" police said. "A Lieutenant in the field observed some of the material and noted the texture and smell was consistent with concrete."

An anonymous email with a “milkshake recipe" that was sent to police on Saturday. (Portland Police Bureau)

After the agency posted on Twitter about the substance, the PPB said it received an anonymous email with a “milkshake recipe” that included soymilk, cement mix and other chemicals “to cause long term injury and burns.”

"The act of throwing any substance on another person without that person's consent constitutes the crime of harassment," police said.