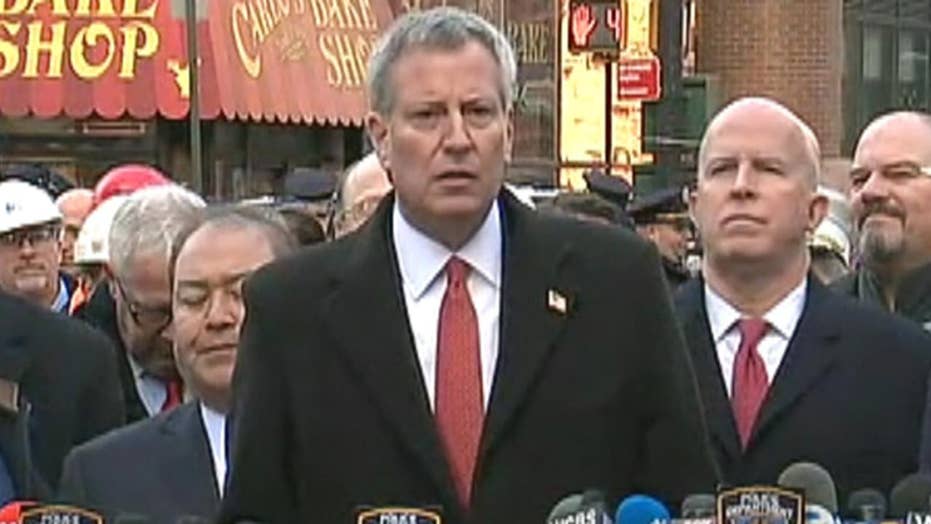 The explosion triggered a massive emergency response by police and fire officials – both above and below ground. The suspect was taken into custody by police.

Following the explosion, many took to social media to express gratitude for the first responders.

N.Y. Gov. Andrew Cuomo urged New Yorkers to return to their daily routine. "Let’s get back to our daily business. We will never allow them to disrupt us. That’s exactly what they want," he tweeted.

During a press conference, NYC Mayor Bill de Blasio called New York the "resilient place on earth." He said, "We are a target because we prove a society of many faiths and many backgrounds can work – we show democracy can work."

“Grateful to the NYPD for quickly apprehending the suspect at Port Authority. We must remain vigilant and give law enforcement the federal resources to keep us safe,” Sen. Kirsten Gillibrand, D-N.Y., said.

Sen. Chuck Schumer, D-N.Y., praised New York City’s first responders and said, “As we learn more about what happened, it is a startling reminder why the ‘see something, say something’ campaign is so important to keeping our city safe.”

“Thankful for the courageous and quick response of our first responders in New York today,” New York Attorney Gen. Eric Schneiderman said in a tweet. “Please stay vigilant and look out for each other.”

“NYPD, FDNY, thank you, today and every day,” said Lin-Manuel Miranda, the “Hamilton” creator and star.

Television personality Bethenny Frankel tweeted, “So is this the new world? We wake up daily to play: find the explosion?”

Actress Alyssa Milano tweeted a news report about the explosion and said, “Please be safe everyone.”

“Thinking of and praying for everyone in New York this morning. Thank God for the brave first responders who were there so quickly,” Rep. Mark Meadows, R-N.C., said.

White House press secretary Sarah Sanders said on Twitter that President Trump “has been briefed” on the attack.

The Washington, D.C., police department tweeted that it was “monitoring” the situation.

“At this time, there are no current threats to the District of Columbia. We ask all residents and visitors to remain vigilant,” the department tweeted.