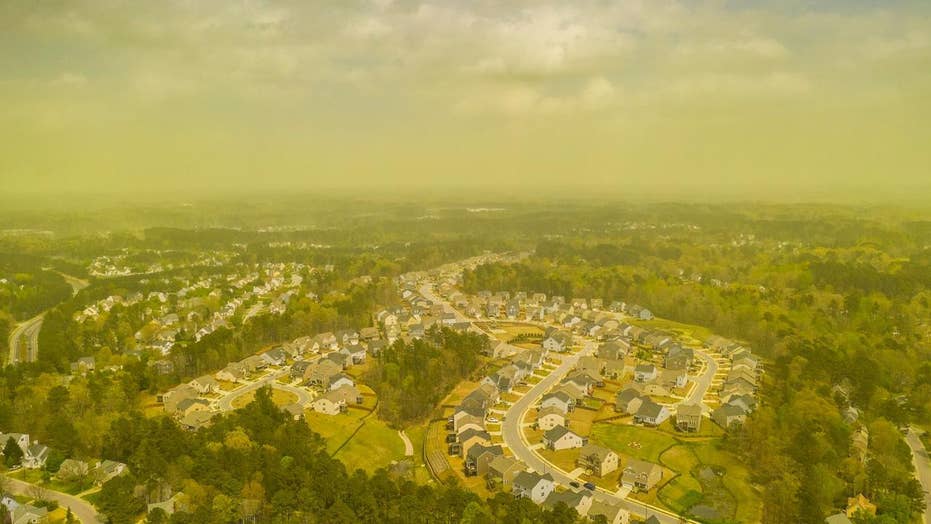 In the hours before thunderstorms rolled across the state, NC photographer Jeremy Gilchrist captured these photos of pollen clouds for miles, choking the spring air.

A combination of high pollen levels and approaching storms created a scene out of a movie earlier this week as the skies over Durham, North Carolina turned an eerie yellow/green from all the pollen in the air.

The stunning aerial photos were captured Monday by photographer Jeremy Gilchrist, who described it as "Pollmageddon"

A thick, green cloud of pollen can be seen over Durham, North Carolina on Monday. (Jeremy Gilchrist)

"No tricks here. Yes you are looking at a green haze made up of tree pollen from the pines of central NC! This is Durham," he posted to Facebook.

The photos show the thick haze over communities as the storms approached.

The clouds of pollen could be seen before thunderstorms moved into the region on Monday. (Jeremy Gilchrist)

Allergy sufferers in North Carolina have been dealing with a rough spring so far, with the tree pollen count in Raleigh reaching the highest level in 6 years, WRAL reported.

"In April in North Carolina we have an overlap for a couple weeks where we have pretty high counts of tree and then grass also gets started," Heather Gutekunst, a doctor with Allergy Partners of Raleigh, told WTVD-TV. "So when we see that, if you are allergic to both, we tend to see an escalation in symptoms."

The thick, hazy air was broken up by the storms on Monday and Tuesday to provide temporary relief for allergy sufferers.

Pollen levels returned to "very high" after the storms, and are expected to stay that way through the weekend. (Jeremy Gilchrist)

But even after washing away some pollen, levels have spiked again to "very high" in Raleigh as of Wednesday.

Medium to high pollen levels are expected Thursday across the state before a slight drop to medium levels for Friday and Saturday, according to FOX46.