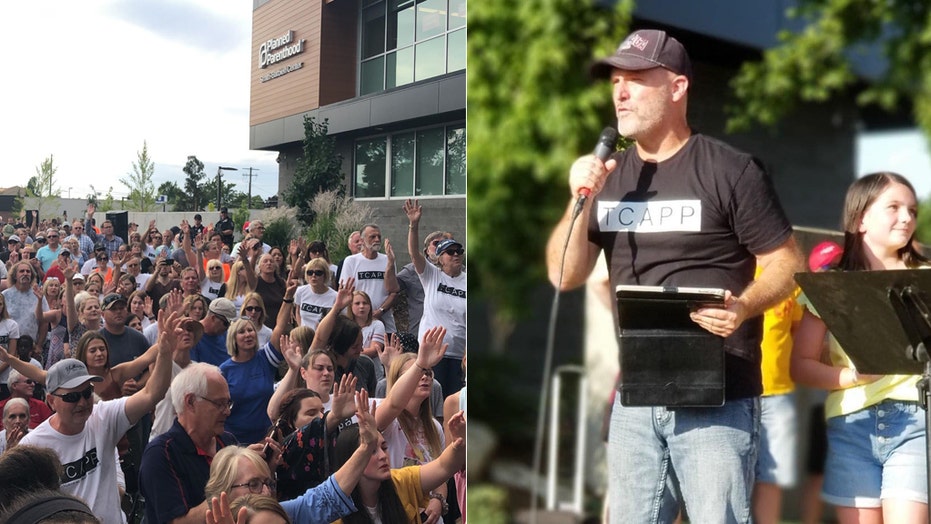 NYC clinic to remove Margaret Sanger's name because of her 'harmful connections to the eugenics movement'; reaction from Benjamin Watson, executive producer of 'Divided Hearts of America,' and Rev. Dean Nelson, executive director of the Human Coalition.

The Church at Planned Parenthood (TCAPP) in Spokane, Wash., is being sued for making too much noise and allegedly harming patients, but the anti-abortion pastor says, "it's false accusations across the board."

TCAPP's First Amendment rights are at odds with the health care of the patients at Planned Parenthood of Greater Washington and North Idaho (PPGWNI), according to the suit filed in June by Legal Voice against five area pastors and Covenant Church, which started the ministry.

"You have a billion-dollar industry suing local church pastors that aren't wealthy at all, for singing and peaceably assembly," TCAPP Pastor Ken Peters told Fox News.

"We've been running for two years. We've never been cited. We don't cause destruction. We don't loot. We don't riot. We literally go to Planned Parenthood and we hold church once a month," Peters explained. "We do this after hours. We are not causing any harm."

Hundreds gathered Tuesday night singing worship songs and Ryan Bomberger, a pro-life advocate who was conceived in rape and founded the Radiance Foundation, was the speaker. The event began at 6 p.m. as the Planned Parenthood closed.

The abortion facility, which has been measuring noise levels, alleges the group's worship and speakers reached disruptive and intimidating levels, violating an ordinance passed by the Spokane City Council in March, after TCAPP started conducting the services. The lawsuit claims police are not enforcing the law because they "are on the side of the church."

“It's really, really frustrating and should not be allowed to happen, when the laws are very clear in Washington state and the city of Spokane about interference with health care facilities,” Paul Dillon, vice president of public affairs for PPGWNI, told Crosscut. “It’s extremely unnerving for the patients at Planned Parenthood.”

However, the pastor said their once-a-month services begin when the abortion facility closes down, and he's said they will start the service later if that is the problem.

"We are bringing attention to the fact that they are killing life for money," Peters said. "That's what they don't like. That's what they're suing us for. We are shining a light for the Lord and on their sin and that's what they hate us."

"At first they tried to drown us out with their own sound and their own protesters, but we kept singing, praying and praising God under our First Amendment rights of assembly and freedom of religion," Peters said.

The pastor says Planned Parenthood filled the city council with pro-abortion members and passed the city ordinance, but his gathering has even lowered their decibels.

The Planned Parenthood spokesman added that the hundreds who gather "can call themselves whatever they want, [but] in no way, shape or form is this a church.”

"The Church at Planned Parenthood is NOT a protest," TCAPP writes on its website, describing itself as a "gathering of Christians for the worship of God and corporate prayer for repentance for this nation, repentance for the apathetic church, and repentance for our blood-guiltiness in this abortion holocaust."

"We don't do anything but pray, preach, and give," Peters said.

TCAPP's next service is set to be held on August 18 with speaker Greg Locke, a Tennessee pastor.

Planned Parenthood claims the service isn’t protected under the First Amendment because of care provided by the facility.

“Patients who rely on Planned Parenthood for vital medical care have the same right as all Washingtonians to access health care without unreasonable disruption or interference,” Kim Clark, Senior Staff Attorney for Legal Voice, told KREM. “This is more vital than ever in a global health pandemic that is disproportionately harming people of color — people who already face substantial obstacles to accessing healthcare. TCAPP and its loud mob of angry protesters, many of whom carry guns, have terrorized patients and staff at Planned Parenthood long enough.”