The Pennsylvania National Guard was deployed to Philadelphia Tuesday as the city braces for a second night of violent riots after tense confrontations between angry demonstrators and police hours after two officers shot and killed a Black man.

The move by Gov. Tom Wolf, a Democrat, to activate the guard is a stark difference from other Democratic governors who have been hesitant or slow to mobilize troops in response to unfolding unrest.

The Philadelphia Police Department will also beef up its presence across the city in anticipation of possible unrest over the death of Walter Wallace Jr., 27, city leaders said.

"For today and this evening, we anticipate the chance of additional incidents of civil unrest and, as such, we will be taking additional steps to ensure order," Philadelphia Police Commissioner Danielle Outlaw said during a news conference along with Mayor Jim Kenney and city leaders. 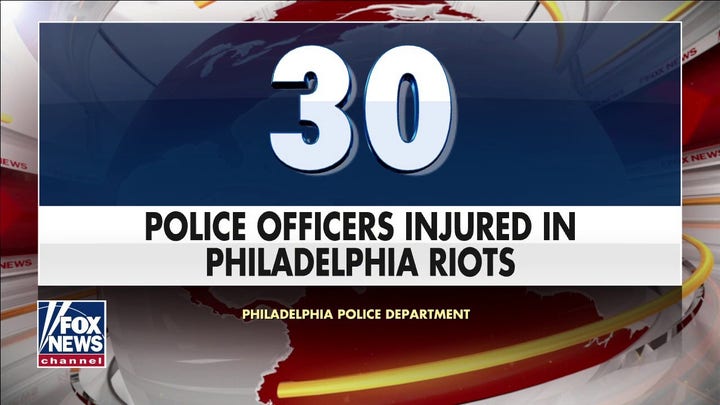 The city will increase the number of officers at "key locations" within the city to respond to any reports of violence, she said. Officials have also asked law enforcement agencies outside the city to help bolster personnel, Outlaw said.

Specifics regarding the number of officers and locations of where they will be placed were not released.

"We were hoping that we won't have any repeat of we've seen last night and we're taking every precaution that we can," Kenney said.

Wallace, who struggled with mental health issues, was shot Monday by two officers responding to a domestic call about someone with a weapon. He was armed with a knife and refused to drop it, police said. Each officer fired approximately seven rounds, officials said.

It was not clear how many times Wallace was hit.

The shooting ignited outrage among residents and prompted hundreds to take to the streets in protest.

The gathering turned violent. About 30 officers were injured, including one who was "intentionally run over" by a pickup truck. Some officers were pelted with objects and 91 people were arrested.

Outlaw said eight police vehicles were damaged, including one that was set on fire.

"This completely caught us off guard," she said of the unrest.

"Walter Wallace's life, like too many others', was a Black life that mattered --  to his mother, to his family, to his community, to all of us," the statement said. "At the same time, no amount of anger at the very real injustices in our society excuses violence. Attacking police officers and vandalizing small businesses, which are already struggling during a pandemic, does not bend the moral arc of the universe closer to justice."

Outlaw said the department has not determined when police body camera footage of the shooting will be released.

People walk out of a damaged store Tuesday in Philadelphia after a protest over the death of Walter Wallace, a Black man who was killed by police in Philadelphia. Police shot and killed the 27-year-old Monday on a Philadelphia street after yelling at him to drop his knife, sparking violent protests that police said injured 30 officers and led to dozens of arrests. (AP Photo/Michael Perez)

In his three years in office, Kranser has charged two police officers over misconduct. Both cases are pending. No Philadelphia police officers have been charged for an on-duty shooting in two decades, according to the newspaper.

Calls from Fox News to the Philadelphia Fraternal Order of Police, the union that represents rank-and-file officers, were not returned.

In anticipation of more unrest, businesses across the city were boarding up windows or closing early.

Several were damaged Monday night, including 10 CVS Health stores, a company spokeswoman told Fox News. In response, all CVS stores in the city will close at 7 p.m. "out of an abundance of caution."

"Thankfully, no employees were hurt," the spokeswoman said. "We’re working to repair the damage and will reopen stores as soon as it is safe to do."