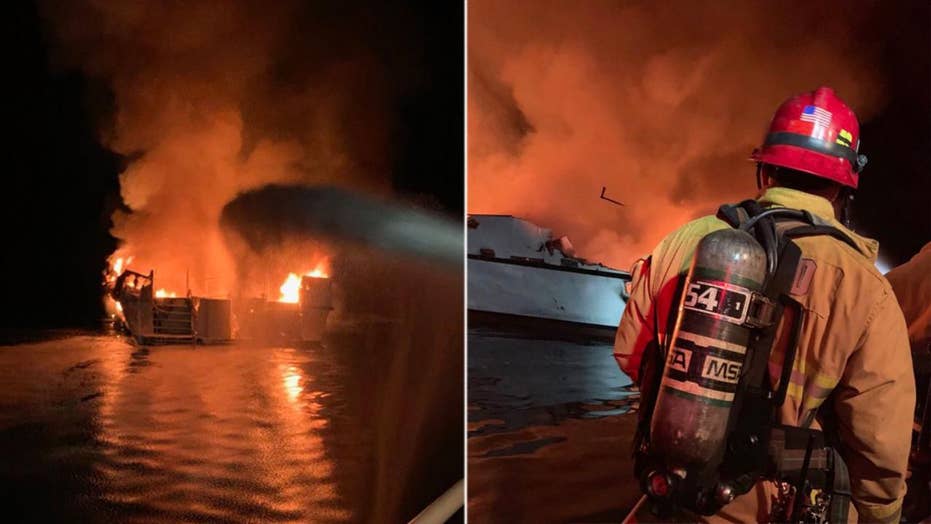 The Santa Barbara-based boat was carrying recreational scuba divers. Five crew members jumped to safety but all 33 passengers were missing.

The Coast Guard confirmed at 11 a.m. local time (2 p.m. ET) that four bodies had been recovered near the boat. Lt. Cmdr. Matthew Kroll said the bodies had injuries consistent with drowning. Searchers were continuing to look for 29 other people who were aboard the vessel Conception when it burned while anchored off Santa Cruz Island.

Authorities gave fluctuating information about the number of people aboard the vessel throughout the day. The Coast Guard said a sixth crewmember who was on the manifest was actually not aboard. There were a total of five rescued.

The Coast Guard said earlier that it responded after overhearing a Mayday call around 3:15 a.m. of an "engulfed 75-foot commercial diving vessel" with 38 people aboard.

A tweet from VCFD said they responded to boat fire off the north side of Santa Cruz Island at approximately 3:28 a.m. (VCFD)

Firefighters from two local fire departments were fighting the fire when the vessel sank 20 yards offshore in 64 feet of water, the Coast Guard said in a news release.

The victims and those still listed as missing were sleeping below deck when the fire started, Coast Guard officials said.

Coast Guard Capt. Monica Rochester told a news conference that the five who were rescued were the boat's captain and crew.

"The crew was actually already awake and on the bridge and they jumped off," Rochester said. She said she didn't know if the crew tried to help others aboard. "I don't have any additional information," she said.

The crew was fished out of the water by the owner of a pleasure craft the Grape Escape that was in the area, Rochester said. 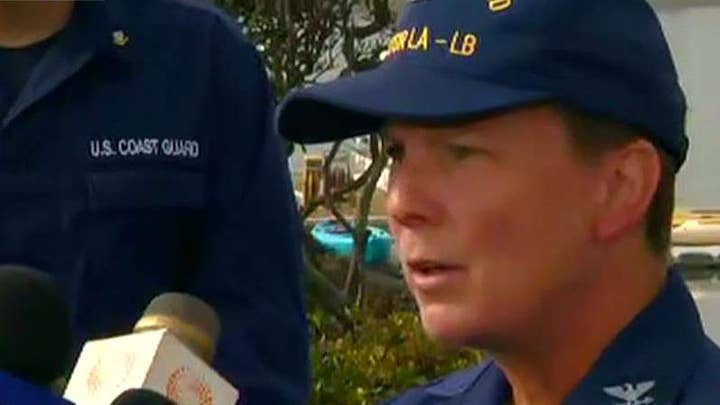 "Simply, a good Samaritan who helped the situation," she said.

Shortly before 5 a.m. local time, the U.S. Coast Guard tweeted that it was coordinating a large water rescue involving a large boat.

"The Coast Guard has launched multiple rescue assets along with assets from local agencies to assist more than 30 people in distress on a 75ft boat near Santa Cruz Island," the tweet said.

Another tweet an hour later said the vessel was reported as being on fire and that one of those rescued had minor injuries.

Firefighters with the Ventura County Fire Department responded around 3:28 a.m., according to a spokesperson.

Conception photographed returning to Santa Barbara Harbor on Jan. 12, 2019, with a rainbow from a winter storm as seen from Shoreline Park in Santa Barbara. (Santa Barbara County Fire Department)

Alldredge said the call was for the diving boat Conception which is based in Santa Barbara Harbor. He said the boat is a fully-equipped 75-foot commercial diving boat that takes out recreational scuba divers and is able to spend multiple days out at sea.

Fritzler's Truth Aquatics website says the Conception has bunk space for 46 people and "rafts and jackets for 110 passengers."

Truth Aquatics posted a photo of the Conception on its Facebook page five days ago with the caption, "there's just something about being on the water."