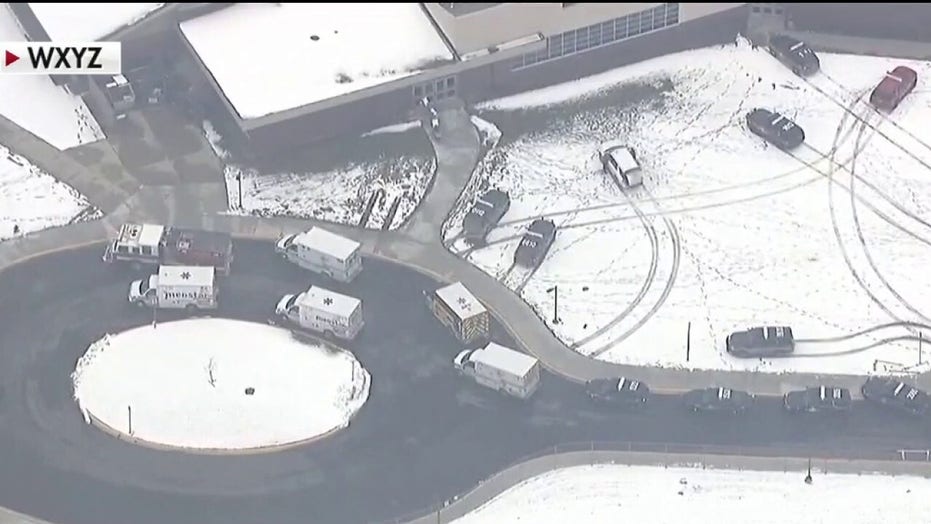 A 15-year-old sophomore at a Michigan high school was taken into custody on Tuesday after allegedly shooting and killing three students and injuring eight others, including one teacher, according to the Oakland County Sheriff's Office.

The deceased victims are a 16-year-old male, a 14-year-old female, and a 17-year-old female. Three of the injured students were in critical condition on Tuesday evening.

Sheriff's deputies were called to Oxford High School at 12:51 p.m. ET and apprehended the suspect within two to three minutes of arriving at the scene.

The gun he used, a 9mm SIG Sauer SP2022, was purchased four days ago by his father, Oakland County Sheriff Michael Bouchard said. The suspect had two 15-round magazines and seven bullets were still loaded when police stopped him.

"When they took it from him, he had a loaded firearm and he was coming down the hall," Bouchard said Tuesday evening. "That, I believe, interrupted what potentially could have been seven more victims."

An aerial view of Oxford High School, which has about 1,800 students.  (WJBK)

The shooter, who authorities believe acted alone, was uninjured and is not answering questions at this time, according to Undersheriff Michael G. McCabe.

"We have talked to the parents, and all I can tell you is they didn’t want their son to talk to us and they have hired an attorney," McCabe said.

The three students in critical condition are a 15-year-old male, a 14-year-old female, and a 17-year-old female. The injured teacher was discharged from the hospital earlier on Tuesday with a graze wound to the shoulder.

Isabel Flores, a 15-year-old freshman, told FOX 2 Detroit that she ran out of the back of the school with other students after hearing gunshots and seeing another student bleeding from the cheek.

Another student posted a video on TikTok of his classroom under lockdown during the shooting. Someone knocked on the door from the hallway and said they were from the sheriff's office. When the teacher responded that they didn't feel like it was safe to come out yet, the person on the other side of the door said, "Open the door… bro."

The students were alarmed enough to flee out a window in the back of the classroom but a sheriff's deputy greeted them nearby and told them they were safe.

Bouchard addressed rumors that the suspect had posted on social media about carrying out a shooting.

"We’re also hearing that there were rumors that somebody had heard or said something or knew something in advance," Bouchard said. "None of that came to us. If we find out there was information, that’s exactly the kind of thing we need to get and get looped into."

Oxford High School officials sent parents a letter on Nov. 12 about "numerous rumors that have been circulating throughout our building."

"We understand that has created some concern for students and parents.  Please know that we have reviewed every concern shared with us and investigated all information provided," the letter said. "Some rumors have evolved from an incident last week, while others do not appear to have any connection."

The incident referenced in the letter occurred on Nov. 4, when someone vandalized parts of the school building and left a severed deer head in a courtyard on campus.

McCabe said Tuesday that the two incidents are not related.

"I know a question came up earlier about a deer head incident. This is absolutely unrelated. That was a different incident and a different student," McCabe said.

President Biden addressed the shooting while on a tour at Dakota County Technical College in Minnesota.

"As we learn the full details, my heart goes out to the families enduring the unimaginable grief of losing a loved one," Biden said. "You’ve gotta know that that whole community has to be in a state of shock right now."

Michigan Gov. Gretchen Whitmer said that "no one should be afraid to go to school."

"I think this is every parent’s worst nightmare," Whitmer said at the scene.

The school of about 1,800 students is located in Oxford, Michigan, which is about 30 miles north of Detroit.

The is a breaking news post and will be updated.