Fox News correspondent Bryan Llenas reports on the arrest of the individual held responsible for the fatal stabbing of NYC resident and mother of two on 'America Reports.'

EXCLUSIVE DETAILS: NEW YORK – The man accused of repeatedly stabbing Queens mom Orsolya Gaal, stuffing the woman’s body into a hockey duffel bag and then dragging it more than a half-mile shouted "f--- you" on Thursday while being led out of a New York City police precinct in handcuffs.

Wearing his long hair pulled back, a white Tyvek suit and sneakers, and flanked by several law enforcement officers, a handcuffed David Bonola ignored several questions shouted by reporters. But shouted, "F--- you, motherf-----," just before stepping into the waiting vehicle headed for central booking. 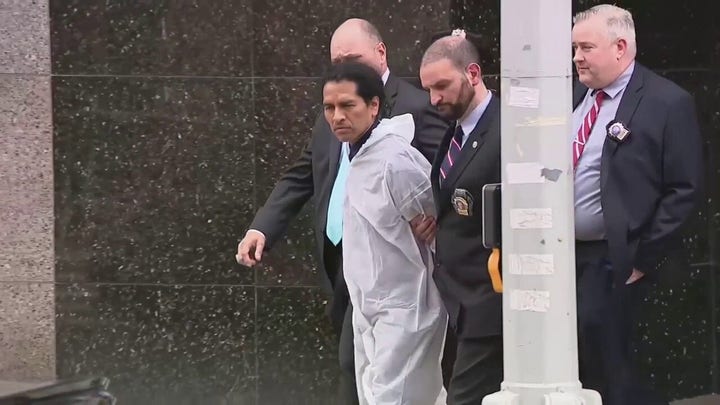 The 44-year-old's outburst appeared to be in response to another person’s comment: "Hope they cut your throat."

He could be clearly heard in video of the transport from the perspective of local Eyewitness News reporter Naveen Dhaliwal.

It was the first time anyone other than police had heard from Bonola, a Queens transplant from Mexico, since the New York Police Department announced charges against him earlier Thursday.

Bonola had worked for Gaal and her family over the course of the past two years, the same length of time that police said he and the 51-year-old married mother began having an "intimate" relationship.

He allegedly confessed to parts of the gruesome crime and made further incriminating statements during interviews with NYPD investigators late Wednesday. He was charged early Thursday morning with murder, criminal tampering and criminal possession of a weapon, police said.

Police officials have said he went to Gaal’s family home in Forest Hills, Queens, early Saturday morning and stabbed her more than 55 times after a failed attempt to try to convince her to rekindle their romance. 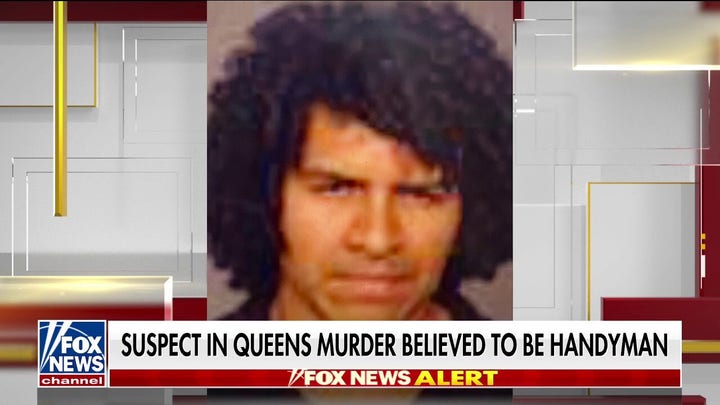 The victim was found murdered and then loaded into one of her son’s hockey bags on Saturday morning, when he dragged the bag about seven-tenths of a mile from her Juno Street home and dumped it.

Investigators also found a blood trail that led them back to the family’s home. One of Gaal's sons was home at the time of the murder, and was questioned by authorities but was later released. Her 53-year-old husband, Howard Klein, was with their other son on the West Coast at the time. 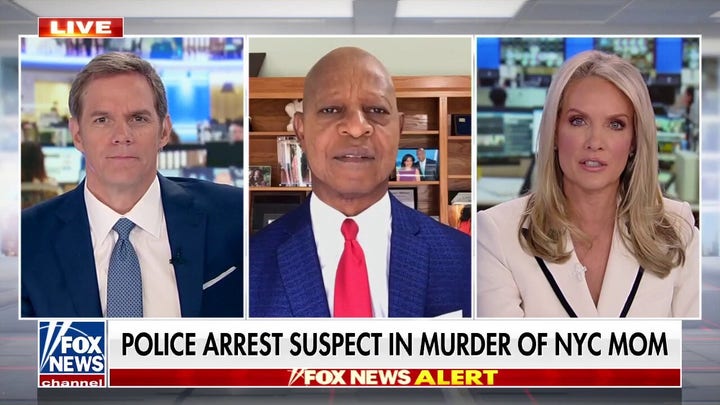 She returned home around 12:20 a.m. Saturday. Police say she either let Bonola into the home or he used a spare key that was hidden in the barbeque about 10 to 20 minutes later, police said.

Gaal and Bonola then went down to the basement where they began arguing, police officials said. Bonola allegedly went to the home that evening "to speak about the relationship again."

"A heated argument ensues between the two in the basement. A knife is brandished. A violent struggle ensues, resulting in our victim being stabbed ruthlessly and brutally in excess of 55 times, causing her demise," NYPD Chief of Detectives James Essig said.

Police said the murder weapon was then left behind at the crime scene.

"Mr. Bonola then retrieved the hockey bag belonging to Ms. Gaal's son, placed her in the bag and, as video showed, was seen rolling the body down the sidewalks, leaving a bloody trail through the streets of Forest Hills," Essig continued. Police believe he then fled to Forest Park, "where investigators discovered the jacket believed to be worn by him during this vicious crime." 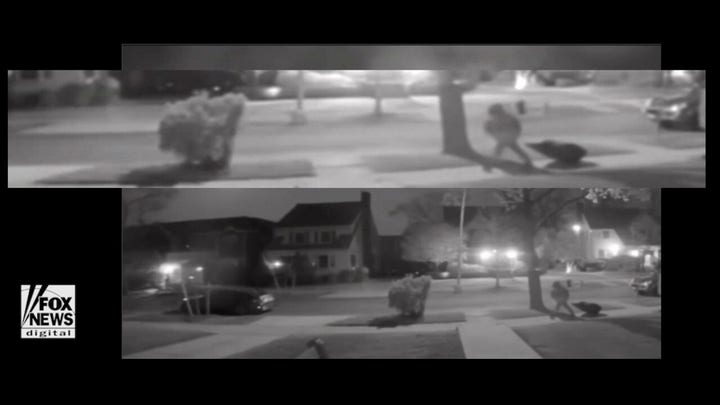 He said detectives also developed leads that pointed them to a location "where boots, a T-shirt and bloody bandages were discovered." They learned he was treated for hand wounds at an area hospital, Essig said.

Surveillance footage from early that morning showed a figure pulling a similar-looking bag along the sidewalk, sources confirmed.

Investigators said the pair had been off and on, but had reunited in the month of April. At the time of Gaal's death, their relationship had been considered "at an end," police said. Their relationship went on for about two years, cops said.

Essig said Bonola made "incriminating statements" to cops. Investigators further described how his "confession" included an admission that he had sent a chilling text message from the victim’s cell phone.

The NYPD said Thursday they believe the contents of the message to be bogus.

"We have it from, in the confession, that he sent that message," an NYPD executive said. "We don’t believe there was any danger to the family."

Investigators further described how they believe Bonola moved the victim’s body because he did not want the family to find it and said the knife used in the crime was "consistent with knives that are in the home."

It was not immediately clear when Bonola would make his first appearance in court.

'VERY IN LOVE WITH HER'

People who frequented the area around Bonola’s 114th Street home described the man as being a "night owl" who enjoyed playing music and was often seen riding his bike.

A man behind the counter at the 7-Eleven store located at Liberty Avenue and 113th Street said Bonola frequented the store at night and was often carrying instruments, such as a guitar.

The man, who asked to be identified only as "Richie," said he had not seen Bonola in about a month. He said the detectives have repeatedly visited the store since Saturday and have viewed surveillance footage.

"What’s the sense of this? I don’t know the reason why he did it. She’s gone," Richie told Fox News Digital.  "What did he accomplish?"

Martin Calixto, the owner of Jasmin's Florist & Hall Decorators located across the street from Bonola’s home, said he had not seen Bonola in about a year. He said Bonola used to stop by the store at night and would buy a single flower – a red rose – each time.

Calixto recalled how Bonola told him he had a girlfriend, "a White lady," though he did not identify the woman by name. He said he recognized Gaal from photos Bonola had shown him.

"He was very in love with her," Calixto went on. "He was talking about her as a very nice girl, very respectful. It’s hard to believe."

Bonola bragged about doing handyman work for celebrities and was supposedly successful at it while moonlighting as a street musician, Calixto said.

Police have said Bonola moved to the U.S. from Mexico about 21 years ago. They would not discuss his immigration status.

Calixto further described how Bonola was previously married in Mexico and had two sons with the woman, who, he was told, later passed away. He said Bonola told him he had served in the Mexican army.

A spokesperson for the Mexican consulate could not immediately confirm.

A law enforcement source pointed Fox News Digital to the Facebook page of a person who matches the name and physical description of Bonola. The person, whose Facebook page was inactive, appeared to have posted comments or otherwise responded to several of Gaal’s social media images dating as far back as 2019, if not earlier.

In one image from April 2019, someone from the account responded to one image from 2019, which appeared to show Gaal in Guatemala, and wrote: "Me fascina esas calles y la arquitectura! Ese paisaje y el Gigante Volcán ., y tu."

The phrase translates to: "I love those streets and the architecture! That landscape and the Giant Volcano, and you."

In a photo from July 2019, which also appeared to show Gaal in Guatemala, someone from the Bonola Facebook page gushed, "Es la mujer más hermosa," or, "She is the most beautiful woman."

Nearly a year later in May 2020, someone from the account responded to one of Gaal’s selfies, and commented: "Tu mirada enamorada," or, "You look in love."