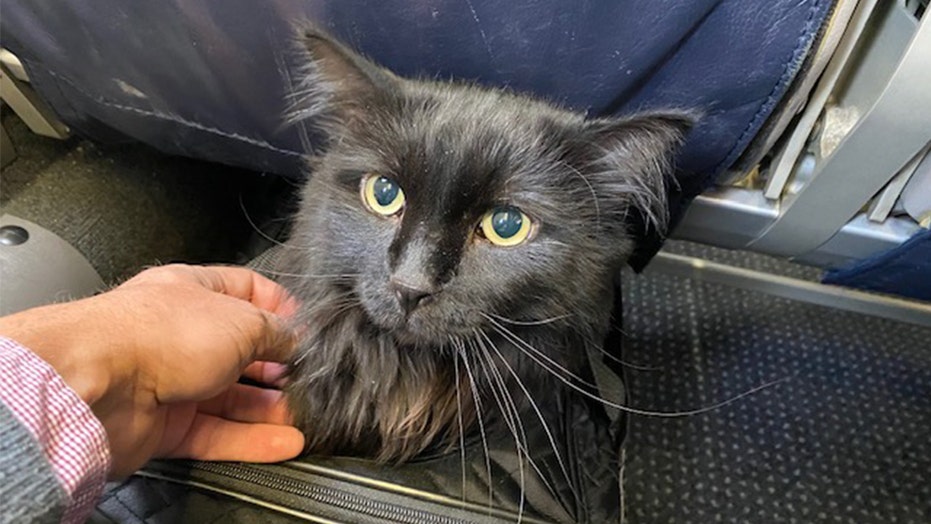 The world may never know how a cat who went missing five years ago in Portland, Ore., turned up in, of all the unexpected places, Santa Fe, N.M.

But though Sasha -- that's the cat's name -- is inclined to keep her secrets, that's exactly what happened to him.

Viktor Usov, of Portland, was reunited with Sasha on Tuesday after the Santa Fe Animal Shelter convinced him that, yes, it had indeed found the cat he’d lost five years ago.

“No way,” the Oregon resident said. “That can’t be my cat. That must be a malfunctioning system.”

Santa Fe Animal Services found the 6-year-old long-haired black cat wandering the streets without a collar. He was brought to the animal shelter, where staff found he had a microchip tying him to Usov, some 1,300 miles away.

Usov needed some convincing. But once the animal services staff described the friendly nature of the cat, he decided it did indeed sound just like Sasha.

The shelter said the black cat was not particularly happy about being picked up, but appeared well fed and healthy.

Usov is in medical school and didn’t know if he could take the time off to go pick up Sasha in Santa Fe. But American Airlines learned of the strange tale and offered to fly Sasha and Santa Fe shelter public relations officer Mirad Kirdar to Portland free of charge.

Airline spokesman Curtis Blessing said the airline was “honored” to be a part of the reunion.

"We're glad to have provided a happy ending to Sasha's long journey," he said, according to the BBC.

Usov said he plans to reunite Sasha with his old companion, a labradoodle named Tara, whom he thinks will remember the lost cat despite the passage of time. They used to eat out of the same bowl when Sasha was a kitten and Tara was a pup.

Usov said he'd gone to the shelter to look for a cat and come home with the mangiest one of the bunch. "He had hair coming out of his ears," Usov said. "A huge belly probably full of worms."

Even so, Sasha immediately became a part of the family. "He'd always greet you at the door with his little tail wagging," said Usov, according to KGW8. "Loved his belly scratched."

Usov said Sasha was an outdoor cat, but he went missing one night after he let him outside, Usov told The Sante Fe New Mexican. “I just thought a coyote got him, which was sad to think about.”

“Once he’s back home, I don’t think I’m letting him out anytime soon,” Usov said.

Kirdar emphasized that the reunion was possible thanks to Sasha's microchip, which contained Usov's phone number. Animal shelters and veterinarians will implant a microchip in a pet for just $5, Kirdar said. And as long as owners remember to update their phone numbers, even the most unlikely of reunions can result.