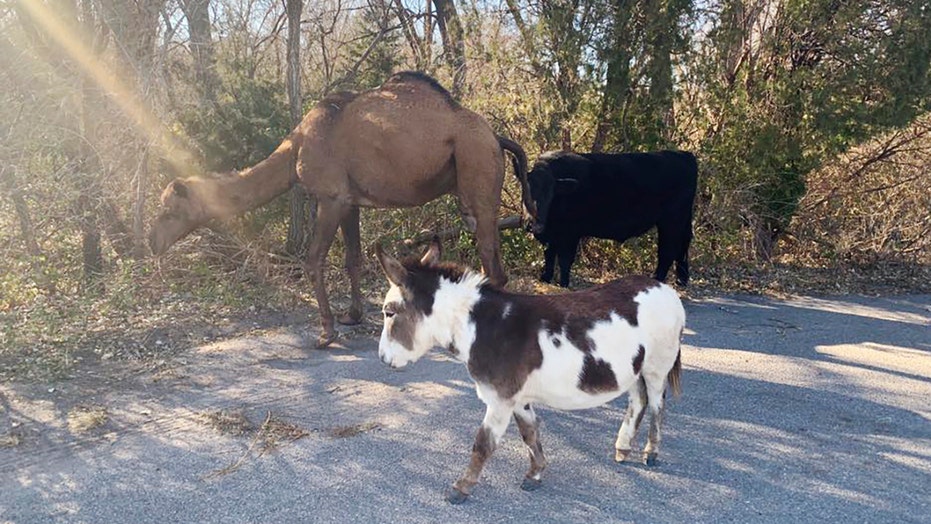 Why did a camel, a cow and a donkey cross the road?

Police in Kansas were left wondering just that after they discovered the unlikely animal trio roaming together on Sunday in Goddard, about 15 miles west of Wichita, in a scene they found reminiscent of a Christmas Nativity.

“Does anyone know the owners of these three friends traveling together (towards a Northern star) just East of Goddard,” the department wrote. “If we cannot locate the owner, we may be halfway towards a live nativity this Christmas season.”

The Goddard Police Department posted a photo on Facebook that showed the animals proceeding toward a golden light, playing into the seasonal theme.

Police had a sense of humor about the odd situation, writing on social media that if they couldn't find the owner, "we may be halfway towards a live nativity this Christmas season.”  (Devon Keith/Goddard Police Department)

Police updated their post a short time later, confirming they had found the animals' owner. Sedgwick County Sheriff’s Lt. Tim Meyers said the animals belonged to an employee of the nearby Tanganyika Wildlife Park.

But not before the photo set off a string of jokes – some of biblical proportions – on social media.

One person who replied to the Facebook post asked, “Are there 3 wise looking men near?” Another speculated that they “may lead you to the Second Coming.”

Several were interested in their names, asking: “Are there (sic) names gold, frankincense and myrrh?”

“They are looking for the nativity scene, they are stars,” another wrote.

Others were just confused over the appearance of the animals in the Midwestern state, with one flabberghasted user writing: “Who owns a CAMEL in Kansas?”

It wasn’t immediately clear how the fugitive animals managed to escape the park.