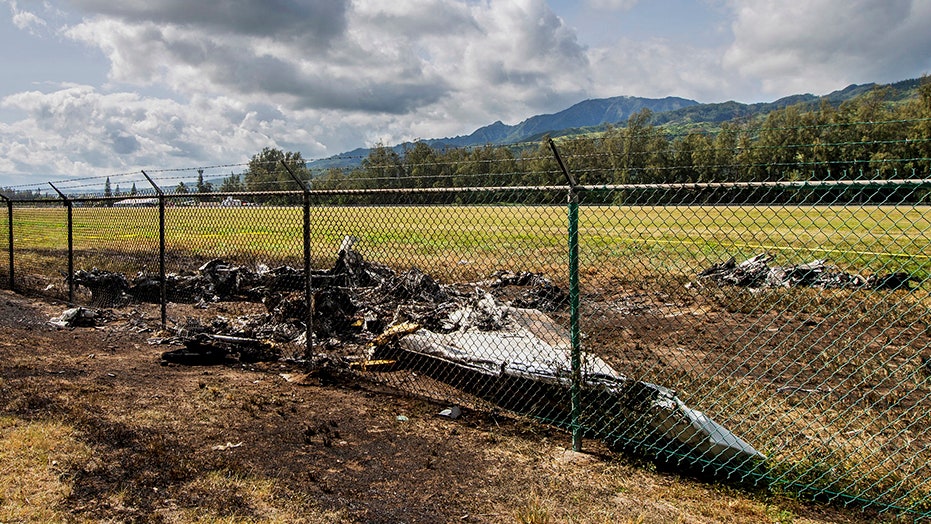 A plane crashed during a skydiving excursion in Hawaii, killing everyone on board.

A National Transportation Safety Board team tasked with investigating the skydiving charter plane that crashed in Hawaii Friday -- killing 11 people in the deadliest U.S. civil aviation accident since 2011 -- says they are going to focus on the quality of repairs that had been made on the aircraft in the years leading up to the disaster.

It has emerged that the plane involved in the accident had crashed in 2016 in California and sustained significant damage to its tail. It was repaired and then returned to service before crashing again last week in a flight operated by the Oahu Parachute Center skydiving company. Officials have not yet released the identities of the victims, but one family has come forward to share their grief.

"We will be looking at the quality of those repairs and whether it was inspected and whether it was airworthy," the NTSB's Jennifer Homendy said, adding that the 1967 Beechcraft King Air twin-engine turboprop plane was equipped to carry 13 people.

An NTSB report compiled after the 2016 crash revealed that the plane had stalled three times and spun out due to the fact it was too heavily weighted to the back. The pilot only managed to land the plane after the skydivers on board jumped out.

This is the site at Dillingham Airfield in Mokuleia, Hawaii, where a Beechcraft King Air twin-engine plane crashed Friday, killing 11. (AP/Honolulu Star-Advertiser)

"Weight and balance has a factor in the safety of these operations and that's a calculation that needs to be made before a plane is operated," Homendy said.

The NTSB will release a preliminary report in about two weeks and a final report once the investigation is complete, which could take up to two years. Homendy said NTSB may release urgent safety recommendations before the final report comes out.

Friday's crash was the most deadly civil aviation accident in the United States since a 2011 Reno Air Show wreck killed a pilot and 10 spectators in Nevada, the Associated Press reported.

Witnesses say the plane crashed 20 or 30 seconds after it took off.

"It's now confirmed that 11 people died in the terrible crash at Dillingham Airfield," Honolulu Mayor Kirk Caldwell tweeted over the weekend. "Our hearts ache for the families and friends of the victims during this very difficult time."

Some family members who did not go on the skydiving trip were present at the crash site. Hawaii News Now reported the plane was fully engulfed in flames when first responders arrived and that smoke was visible for miles.

One witness, Wylie Schoonover, said she saw the plane flying over trees while driving nearby, then smoke rising from the airfield.

There was, "an insane amount of fire," she said. "It didn't even look like a plane. A bunch of people were asking, 'what is this?' It was completely gone."

Police told the Honolulu Star-Advertiser that the victims included two women and nine men and that five of the victims were in their late 20s.

The family of one skydiver, 29-year-old Casey Williamson, is sharing its grief with the world before names are officially released. They say he loved adventure and would spend summer skydiving in Moab, Utah and the winter snowboarding in Vail, Colo. He moved to Hawaii a year-and-a-half ago to skydive year-round.

Williamson was his mother Carla Ajaga's only child, his cousin Natacha Mendenhall said.

"We're all very upset," said Mendenhall, she told the Associated Press from her home in Fort Worth, Texas. "She cannot really talk right now. What she wants everyone to know is how full of life her son was, how loving he was."