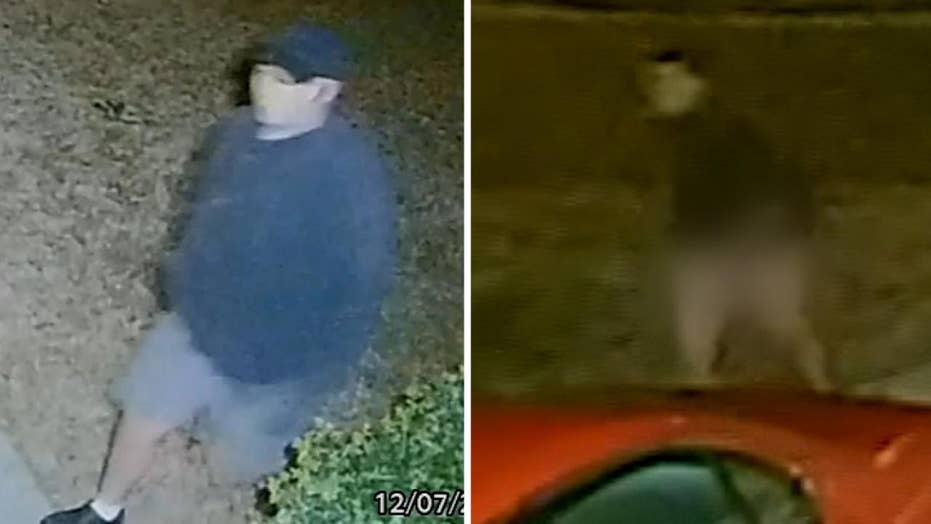 Raw video: Police asks for help in identifying man who appears to be prowling around houses without wearing any pants.

North Carolina police were searching Monday for a man dubbed the “pantsless prowler” after several home security cameras spotted him lurking in a neighborhood after dark – at least once without wearing any shorts, investigators said.

The “sometimes half-naked man,” believed to be in his 20s or 30s, was seen scurrying across front and side yards in the Riverwood Athletic Club neighborhood in Clayton, about 17 miles southeast of Raleigh, the Clayton Police Department wrote Monday on Facebook.

Police released a montage of home surveillance videos in the hope that the public can help identify him.

In most footage, the man appears to wear a baseball cap, a blue sweatshirt or jacket and light blue shorts with white socks and black shoes. However, in one clip he appears to not be wearing any shorts and he runs across a street and crouches down in a backyard near a grill.

The man appears to wear a baseball cap, a blue sweatshirt or jacket and light blue shorts with white socks and black shoes in most footage. (Clayton Police Department)

The man has been seen in the neighborhood the past few nights, walking across driveways and near front doors, police said. He was last spotted Saturday night around 11 p.m., but so far has only been reported for trespassing.

Neighbors have agreed, telling the station the behavior is unnerving.

"It's really concerning – what this is about," said a woman who didn’t wish to be identified. "And I think all of us in the neighborhood and especially our street want to know what prompted this and what is the reason for the continuation of it?"

The man has so far only been reported for trespassing, police said. (Clayton Police Department)

While it’s unclear to police why the man was skulking about the town, social media users have come up with their own theories.

“Watch your neighbors... any of them cheating,” one said. “Seems like a husband came home early and dude had to leave his pants behind in a hurry.”

Others thought the behavior might be for a more innocent reason.

“He could be a sleepwalker...I have gone outside before when sleepwalking,” one wrote.

The ma appeared to be half-clothed while running across a street and into a backyard, where he crouched next to a grill. (Clayton Police Department)

Another said: “This looks like some weird game of hide and seek … seems weird but harmless at least."

Clayton police have asked anyone who recognizes the man to call the department at 919-553-4611.