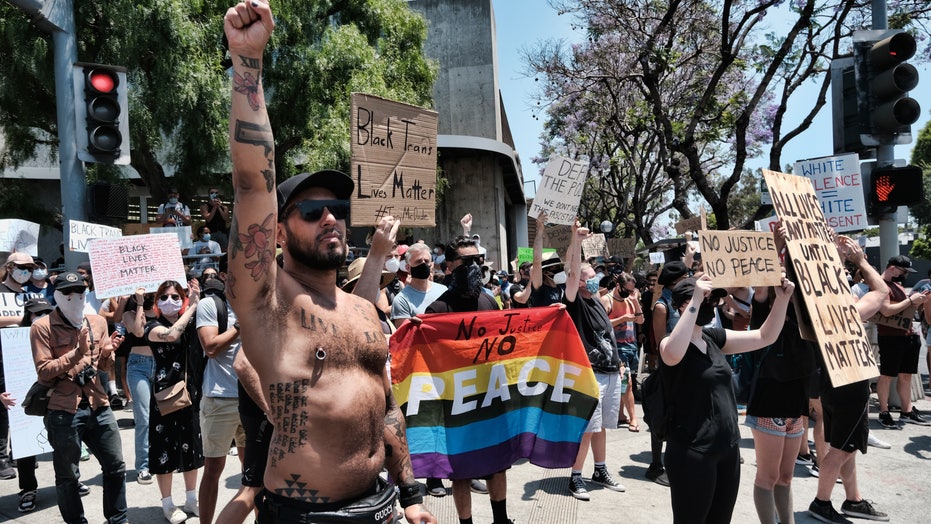 A vehicle plowed toward a crowd of peaceful demonstrators in Southern California on Wednesday, sending people scattering for their lives, as protests continued throughout the U.S. following the death of George Floyd in police custody.

The white Mini Cooper with Arizona plates was captured on video coming dangerously close to hitting numerous people in Newport Beach., Fox 11 Los Angeles reported. Remarkably, no one was seriously injured during the afternoon incident and police took the driver into custody, according to a tweet by Mayor Will O'Neill.

"I saw it from my balcony so I went to set it straight. It was purposeful," a witness told the station. "I saw him step on that gas, I saw him hit people, roll by, children were running. That guy didn’t care. No lives mattered to him."

Dozens of demonstrators were heard shouting “Get out of the way!” during a live report by FOX 11's Stephanie Stanton. She was heard yelling "Oh my God!" multiple times, as the car drove through the crowd.

The driver was arrested nearby, Newport Police spokeswoman Heather Rangel told Patch. He was identified as Don Wallace, a Newport Beach resident in his 50s.

Another witness reportedly threw his bicycle in the way of the vehicle to avoid getting hit, while fearing for the lives of others, according to the station.

“The rage on his face, he was determined to kill somebody," said Brandon Yamawaki. "He went right through me, I threw my bike in between me and the car before it hit me. I looked to the right and he kept spinning down and there were three children right in the way."

On Sunday in Minneapolis, a semitrailer sped toward a crowd of people protesting the death of Floyd, video showed, in a harrowing series of events forcing the protesters to run for safety.

A law enforcement official who witnessed the incident told Fox News it appeared to be an accident and the driver, Bogdan Vechirko, has since been released from police custody without charges.