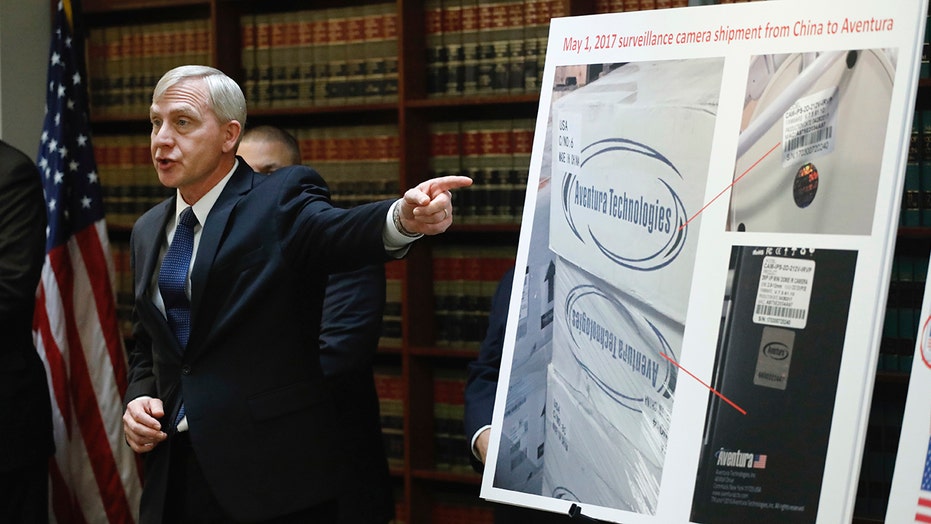 A New York-based technology firm allegedly engaged in a decade-long fraud scheme that created a potential national security risk by importing Chinese-made surveillance and security equipment and selling the technology to the U.S. government as “made in the USA,” prosecutors said Thursday.

Aventura Technologies, located in Commack, N.Y., began to falsely represent their equipment as made in the U.S. back in 2006, and made more than $88 million in sales revenue, U.S. Attorney Richard Donoghue said at a news conference. Seven current and former employees have been charged.

The scheme “created a channel in which foreign adversaries could potentially access our government’s most sensitive facilities and computer networks” with technology that had “known cybersecurity vulnerabilities,” Donoghue said.

The investigation began in 2017, but prosecutors alleged the scheme had been going on since 2006.  (AP)

When asked if the Chinese were trying to spy on the U.S., Donoghue answered: “You can see that individuals in China were well aware where [the equipment] was going,” adding that the federal complaint made no allegations against the Chinese government.

Aventura received over 1,000 shipments of surveillance and security equipment, and sent millions of dollars to China as payment, prosecutors alleged.

The company went to “extraordinary lengths to perpetrate fraud,” removing identifiers in software code, modifying markings on circuit boards and even having the items imported with fake “made in the USA” labels,” Donoghue said.

An investigation into the company began in 2017 after U.S. Air Force members first noticed an image in their software that related to a Chinese security service in a so-called U.S.-made camera, investigators said. An inspection revealed the equipment and software were manufactured in China.

Aventura Technologies, along with seven current and former employees, were charged with fraud, money laundering and illegal importation of equipment.

Aventura and seven current and former employees have been charged with illegally importing and selling Chinese-made surveillance and security equipment to U.S. government agencies and private customers.  (AP)

Four of them were additionally charged with defrauding the U.S. government by falsely claiming that Frances Cabasso was the owner-operator to get “valuable” government contracts reserved for women-owned businesses, investigators said.

Of the seven, six were arrested Thursday morning as federal agents conducted a raid on the firm, NBC New York first reported.

Donoghue told reporters that when investigators interviewed Jack Cobasso, he claimed that his competitors carried out the same fraud scheme. Donoghue didn’t elaborate on his claim.

The defendants were expected to be arraigned Thursday afternoon.