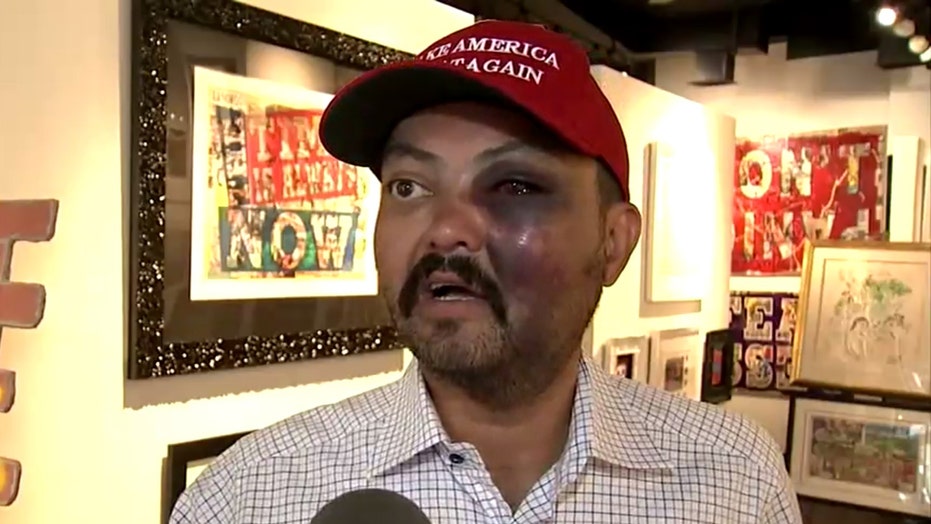 Police are investigating a New Jersey man’s claim that he was attacked Tuesday night by nearly two dozen people in New York because he was wearing a pro-Trump “Make America Great Again" hat.

Jahangir Turan told reporters Thursday that he had just left work at around 6:30 p.m. when the alleged attack took place. He claims he was accosted by a group of “18-20” people on Canal Street who “chanted anti-Trump stuff” like “f--- Trump” and “f--- you” because of his MAGA hat.

Turan, a resident of Hoboken, told reporters he didn’t get a good look at the suspects but guessed that they were all around 18 years old.

He said one female flipped his hat while another male pushed him from behind, forcing his head into a scaffolding pole.

Jahangir Turan claims he was assualted Tuesday night for wearing a “Make American Great Again" hat that he had purchased earlier that day. (FOX5)

An NYPD spokesperson confirmed to Fox News in an email Friday that police were investigating reports of an assault that took place on Canal Street Tuesday at around 6:50 p.m.

Police say the victim, 35, reported that he was punched in the back of the head. Turan claimed that he suffered a fracture in his cheek when his face was shoved into the scaffolding pole.

The NYPD said that Turan refused medical attention on the scene.

Turan was corrected by a reporter Thursday after claiming he was attacked Monday night. He again said the incident occurred on Monday, but then said it was Tuesday night when he was corrected.

41-year-old Rosiane Santos faces charges of disorderly conduct and assault and battery for incident with man wearing a 'Make America Great Again' hat at a Mexican restaurant on Cape Cod.

Turan said he went to the hospital the next day, when he learned the extent of his injuries. He said he waited because his condition worsened overnight.

Police said there was no description of the individuals and as of Friday the investigation was ongoing.

“I went that day to Trump Plaza to buy the hat to put on my TV and I wore it just to take it home,” Turan said. “I had no intentions of wearing in New York City because I think it’s dangerous to wear a hat like this in New York City.”