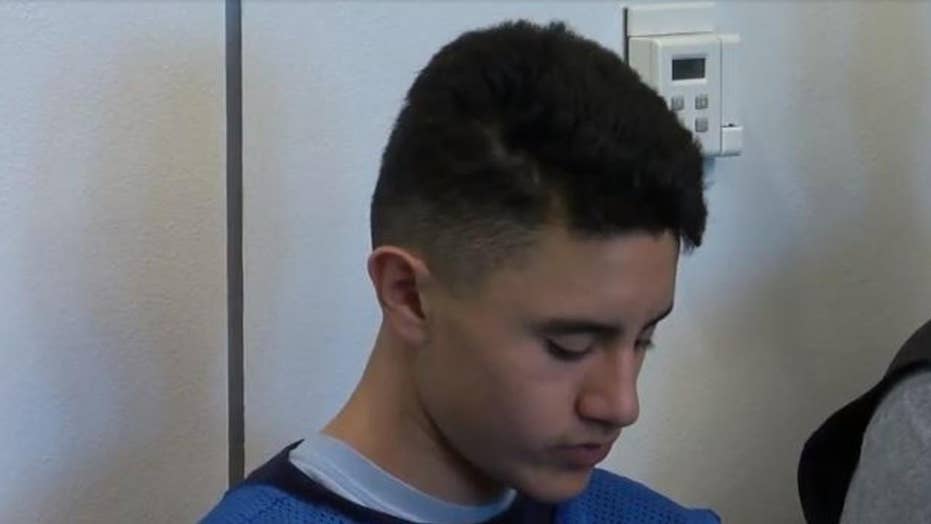 Teen gets 30 days in jail for killing man

Santiago Armijo received a 30-day sentence for his role in the shooting death of 25-year-old Larry DeSantiago. The New Mexico judge attached to the case said juvenile court rules did not allow him to sentence the teen longer. Armijo was 15 at the time of the shooting.

A New Mexico teen who allegedly fatally shot a man — and told him he deserved it — will serve just 30 days behind bars for murder, according to officials.

Santiago Armijo, 17, is one of two teens involved in the murder of Larry DeSantiago, 25, at a park in Albuquerque in March 2018. Witnesses told investigators they saw DeSantiago chase Armijo and his friend, Jeremiah De La Pena, 16, toward the top of a hill before Armijo shot him in the chest.

“That’s what you get!" Armijo shouted at DeSantiago, according to the Albuquerque Journal, which reported Santiago later died at a hospital. Armijo and De La Pena were later arrested in a nearby neighborhood and police found the weapon in De La Pena's jacket.

Santiago Armijo, left, was sentenced to 30 days in jail for the murder of Larry DeSantiago last year. Jeremiah De La Pena, right, has pleaded in the case but has not yet been sentenced.

On Thursday, Judge Christina Jaramillo sentenced Armijo to 30 days in juvenile jail after the teen, who was 15 at the time of the shooting, pleaded guilty to second-degree murder, tampering with evidence, one misdemeanor count of unlawful possession of a handgun and conspiracy to commit armed robbery.

Jaramillo told the victim's family her "hands were tied" because the maximum possible sentence for the teen would be four years in juvie. Prosecutors asked for the maximum sentence.

“I can only do so much, but, whatever I do, it will not bring back Larry,” she told the family. “It will not heal your hearts or the hole that’s left in your hearts. There’s nothing that I can say or do that will help that.”

While Armijo could've been held in detention until he turns 21, Jaramillo said she was choosing treatment for him, instead of incarceration. She also ordered him to be on supervised probation and the teen will be required to speak at high schools to lecture students about the consequences of their actions.

Prosecutor Natalie Strub said during the sentencing hearing that Armijo and De La Pena had texted about a plan to rob someone days before Santiago was killed.

“This isn’t a drug possession or a car theft. This is the most serious charge, taking the life of another person,” Strub argued, per the Journal. "Four years for taking the life from a family that will never get to see a 25-year-old man grow up. It’s not justice, but it’s something, and that’s what the state’s asking for.”

Armijo's defense attorney argued that De La Pena was a bad influence on the 17-year-old. De La Pena has also pleaded in the case but has not yet been sentenced.