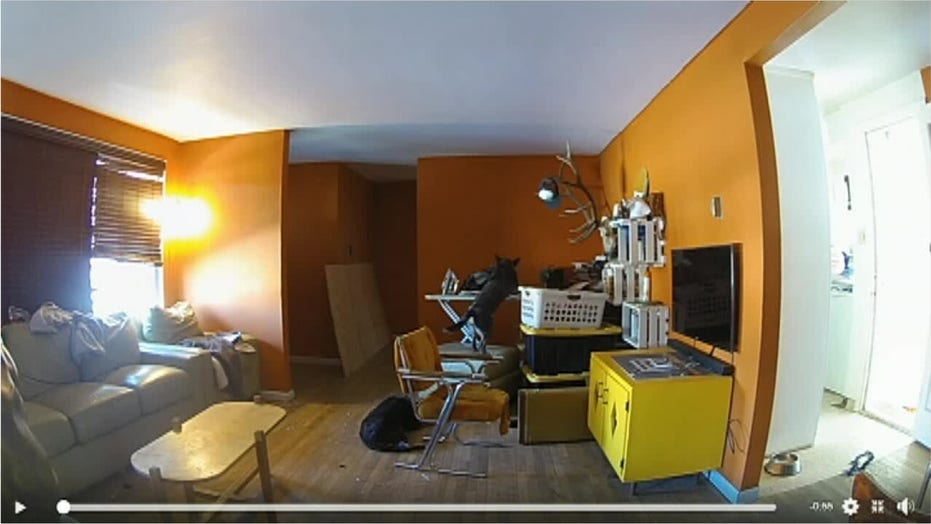 After knocking over an ironing board and starting a fire, two New Mexico dogs are lucky to be alive.

Curiosity almost burned down the house.

A "curious pup" was to blame for a fire at a home last month, officials in New Mexico said Monday.

Home security footage shows the moment a 9-month-old dog named Kahuna was "rearranging" the furniture by knocking over an ironing board, causing the items on it to block a floor heating grate, the Los Alamos County Fire Department said in a news release.

"The furnace was operating and produced sufficient heat to melt some items, which flowed into the heater and served as the necessary fuel to initiate the fire down inside the furnace unit," fire officials said.

Video released by the department posted to Facebook shows the moment the dog knocked over the ironing board and started the fire.

Officials said it took about an hour for the fire to ignite.

Kahuna, left, can be seen with the damage caused after knocking over and ironing board last month. (Los Alamos County Fire Department)

Both Kahuna and the other dog seen in the video, Paige, escaped uninjured, according to officials.

Firefighters said they were able to "quickly douse" the fire and limit damage to the structure.

"LAFD recommends homeowners ensure that smoke alarms are installed and working, that no combustible items be placed on or within three feet of heating devices or heat producing appliances," the department said on Facebook. "Another important safety practice is to have an escape plan as demonstrated perfectly in the video."