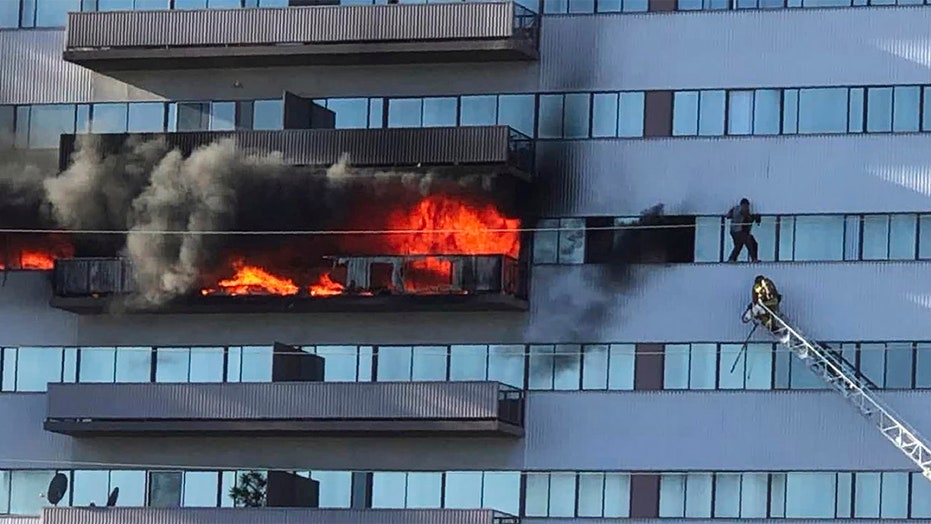 A foreign exchange student from France has died of injuries sustained in a Los Angeles high-rise apartment fire earlier this week.

The victim was identified by authorities as Jeremy Bru, 19. He died Friday evening, according to reports.

Bru and six others - including a three-month-old baby - were hospitalized after a fire tore through the Barrington Plaza apartment complex on Wednesday. Four other people were treated after the fire, mostly for smoke inhalation.

There was no updated word on their conditions Friday.

Video showed the dramatic rescue of a man by firefighters after he climbed out on the side of the building to escape the flames.

This image from video by Jenna Fabian shows a Los Angeles Fire Department firefighter on a ladder rescuing a man who had climbed out on the side of a 25-story high-rise apartment, escaping flames from a burning apartment balcony, after a fire broke out on a sixth-floor balcony and sent choking smoke billowing through the upper levels in West Los Angeles Wednesday, Jan. 29, 2020. (Courtesy of Jenna Fabian via AP)

The cause of the fire, which began on the sixth-floor and spread to two upper floors and one lower floor, was under investigation.

The building was exempt from having to install sprinklers because it was built before 1974, Fox 11 Los Angeles reported.

Another fire caused damage to the building seven years ago.

A Los Angele Fire Department ladder stands at the side of a 25-story high-rise apartment building where a fire broke out on a sixth-floor balcony and sent choking smoke billowing through the upper levels in West Los Angeles Wednesday, Jan. 29, 2020. (AP Photo/Stafanie Dazio)

In response to a request for comment on the lawsuit, the fire and the lack of sprinklers, the company said in statements Friday that its “thoughts and prayers are with those who are injured" and its focus was on getting residents back into their homes.

The company said floors 10 through 25 were cleared for residents to return to their units and residents of the lower floors were being accommodated in hotels until further notice.