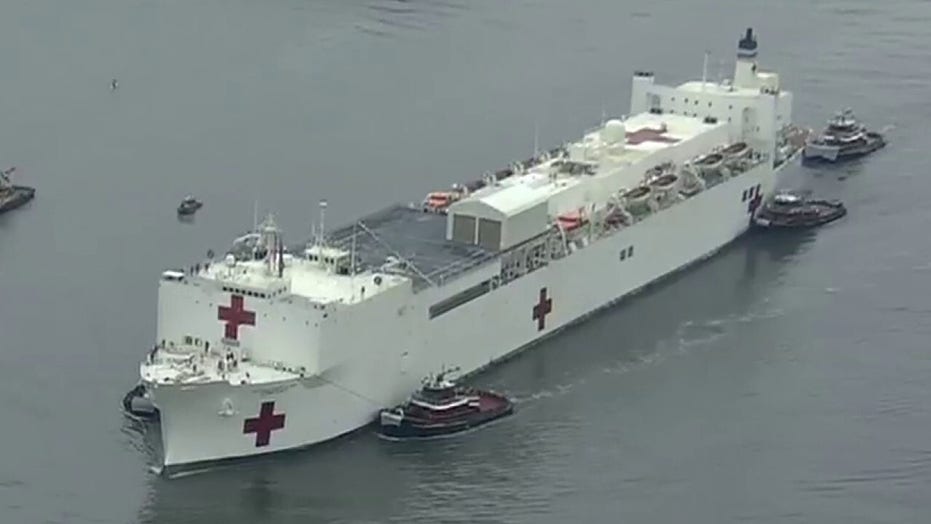 The 1,000-bed military ship will be returning to Norfolk, Virginia after discharging its last patient; Alex Hogan reports from the scene.

The Navy hospital ships deployed to New York and Los Angeles last month to relieve hospitals overwhelmed by the coronavirus pandemic reportedly saw few patients despite having the capacity to treat large numbers.

But the city has not been overrun with virus cases, and the Mercy has not had to play its envisioned role of being a safety net for hospitals.

Since arriving at the end of March, the ship has treated just over 70 non-coronavirus patients for everything from heart and lung conditions to gastrointestinal problems. On Thursday, it had just nine patients on board. And even with hundreds of empty beds, there are no plans to send the Mercy home to San Diego.

"We're encouraged by data which suggest the curve is flattening, but the threat remains," the Federal Emergency Management Agency (FEMA) said in a statement. "When appropriate, we will work with the city and state to determine if the mission is complete."

A similar outcome has taken place in New York, where the Navy's other hospital ship, the USNS Comfort, left Thursday having treated only 182 patients.

Brian Ferguson, a spokesman for the California governor's Office of Emergency Services, said talks are ongoing about how the ship's medical workers can be used elsewhere.

Bryan Clark, a senior fellow at the Hudson Institute, predicted that the longer the Mercy stays in port with few patients, the harder it will be to justify the costs.

"There was a need to reassure people that something was being done, and hospital ships are very good for that," said Clark, adding: "Once its need passes, it can turn from a symbol of commitment to a symbol of inefficiency.''

FEMA estimates the Mercy's mission will cost it about $7.5 million, though the final bill will not be known until the assignment's been completed.