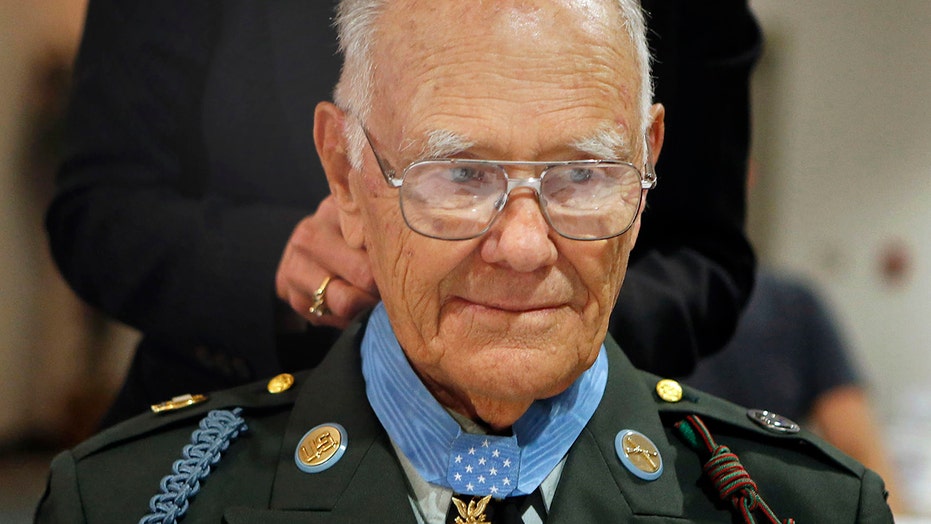 Robert Maxwell, awarded the Congressional Medal of Honor for selflessly throwing himself on an exploding German hand grenade -- saving the lives of a battalion commander and several other soldiers in World War II -- has died in Bend, Oregon. He was 98.

At the time of his death, announced Monday by the Congressional Medal of Honor Society, Maxwell was the oldest living recipient of the nation’s highest military honor.

“He was a very humble, quiet person,” close friend Dick Tobiason told the Bend Bulletin. “He smiled whenever he talked about veterans, the flag, country, and patriotism. He loved being an American.” Tobiason said his friend died of natural causes.

Maxwell was a 24-year-old communication platoon lineman in 1944 when he dived onto the grenade, using an Army blanket as protection.

His split-second act of heroism left him with permanent injuries.

Maxwell and six to eight other members of his platoon were jammed in a small courtyard defending a battalion observation post in a house near Besancon, France, when the Germans launched a heavy attack.

A low wall protected them against machine-gun fire but the Germans worked their way to within 10 yards of the group and began hurling grenades, according to the Associated Press.

“I could hear it fall right near my feet,” Maxwell said long afterward in an interview with a local cable TV station, The New York Times reported Monday. “I didn’t know for sure where it was. This was between 1 and 2 in the morning. I groped to find it and throw it back, but I knew it was too late to do that. I was already crouched down, but I did have my blanket, shoved it down on my chest and dropped where I was.”

The grenade explosion knocked Maxwell unconscious, tore away part of one foot and peppered his head and left arm with shrapnel, the paper reported.

One of those in the courtyard was Cyril McColl who told Collier's magazine in 1945 that, while the other soldiers were knocked off their feet, they got up without a scratch, according to the Times.

“We started to pick him up and beat it, but he made us leave him and keep on fighting," McColl said. "Only when the battalion commander and his staff had moved out of the house would he let us hustle him back to an aid station.”

Another who was there was retired Maj. Gen. Lloyd Ramsey.

"Bob, I'd like to say thank you a million times for all you did for us," Ramsey told Maxwell when they were reunited in 2010, the Roanoke Times reported. "You're a true soldier."

"I didn't think about any of that at the time," Maxwell replied.

Gen. Lloyd Ramsey, right, reunites with Robert Maxwell, left, at the Brandon Oaks Assistant Living Center in Roanoke, Va. The two had not seen each other since Maxwell threw his body on to a grenade during WWII, saving the lives of Ramsey and several others. (AP Photo/The Roanoke Times, Matt Chittum)

Maxwell was a longtime auto shop teacher in Bend with four daughters, seven grandchildren and eight great-grandchildren, the Bulletin reported.

The oldest Medal of Honor recipient is now 97-year-old Charles Coolidge of Tennessee, the Bulletin reported.