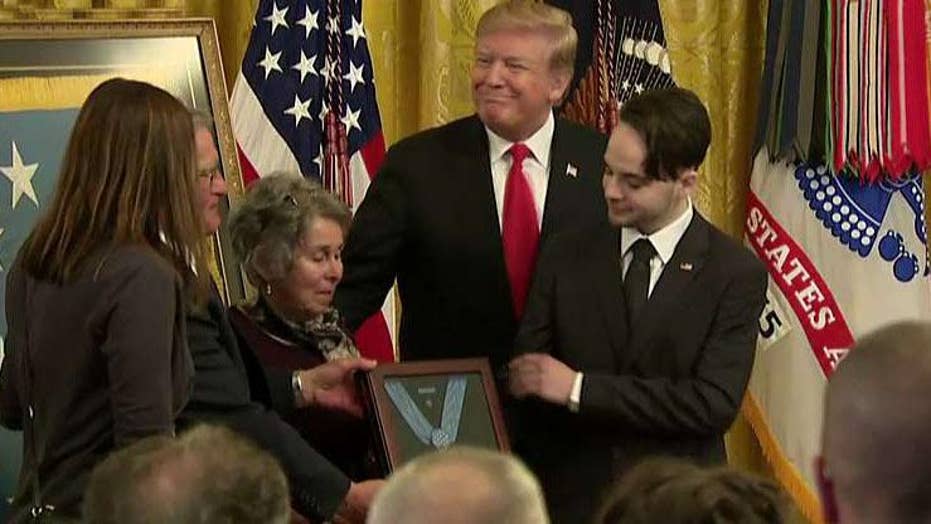 Trevor Atkins was 11 when his father, Army Staff Sgt. Travis Atkins, was killed while serving in Iraq a dozen years ago. On Wednesday President Trump will present the Medal of Honor to the Atkins family to recognize Travis for his heroism in saving fellow soldiers while losing his own life.

“My true treasure is what people say about him,” Trevor tells an interviewer for an Army video tribute to Travis Atkins. “That’s what makes me the most proud.”

Trevor has plenty of reason to feel proud lately. Earlier this month the White House announced that his father would be awarded the Medal of Honor.

In 2007, Staff Sgt. Atkins was in Iraq with the 10th Mountain Division. It was his second time in the country. His first was in 2003, and soon after he was honorably discharged.

He worked and attended the University of Montana, but missed the military. He re-enlisted in 2005. It wasn’t a surprise for his family. In the Army video, his mother Elaine recalled that Travis said basic training was “the best time I’ve had in my life.” Jack Atkins added of his son, “The civilian life just didn’t do it for him.”

By the summer of 2006, Travis was back in Iraq. Conditions in the country had deteriorated significantly since his first deployment. In the midst of this tour, President George W. Bush would approve the escalation of troop levels that became known as the surge in a last-ditch attempt to save the situation. Travis did not hide the dangers involved from his family. “He was very open about that,” his son recalled.

His mom and dad made the long journey from their home in Montana to Fort Drum, New York, home of the 10th Mountain Division, for the deployment ceremony. Elaine recalls sitting in the stands, watching the troops on the parade ground. “You know, a parent always realizes that some of them are not going to come back,” she told the Army interviewer, fighting back tears.

On June 1, 2007, Staff Sgt. Atkins was conducting route security in the town of Abu Sarnak. He and his soldiers stopped a pair of suspected insurgents and Atkins was soon engaged in hand-to-hand combat with one who was reaching for his explosive vest.

“Atkins then grabbed the suicide bomber from behind with a bear hug and slammed him onto the ground, away from his soldiers,” according to the Army News Service. “As he pinned the insurgent to the ground, the bomb detonated.

“Atkins was mortally wounded in the blast. With complete disregard for his own safety, he had used his body as a shield to protect his three fellow soldiers from injury. They were only feet away.”

The Medal of Honor is the nation’s highest award for valor, and has only been awarded to 3,504 men and one woman since it was created during the Civil War. More than half since World War II have been awarded posthumously because the recipient made the ultimate sacrifice while acting to save others. The Iraq War is the only conflict in which none of its Medal of Honor recipients – Atkins is the fifth -- survived the act of valor for which they were honored.

Trevor, Elaine and Jack Atkins will be at the White House for the awarding of Travis’ medal. The son will accept the honor on behalf of his father.

“It means the world to me, the Medal of Honor, it’s the biggest one,” Trevor said in the Army video. “I can’t thank everyone enough for the support and everything that they’ve done to give him that, because he did truly deserve it.”

While it is the highest honor the nation can bestow, Travis would likely hold this tribute from his son in even higher regard:

“He was a great soldier and a great father. … He was my icon,” Trevor said.

Kevin Ferris is an editor at Fox News.