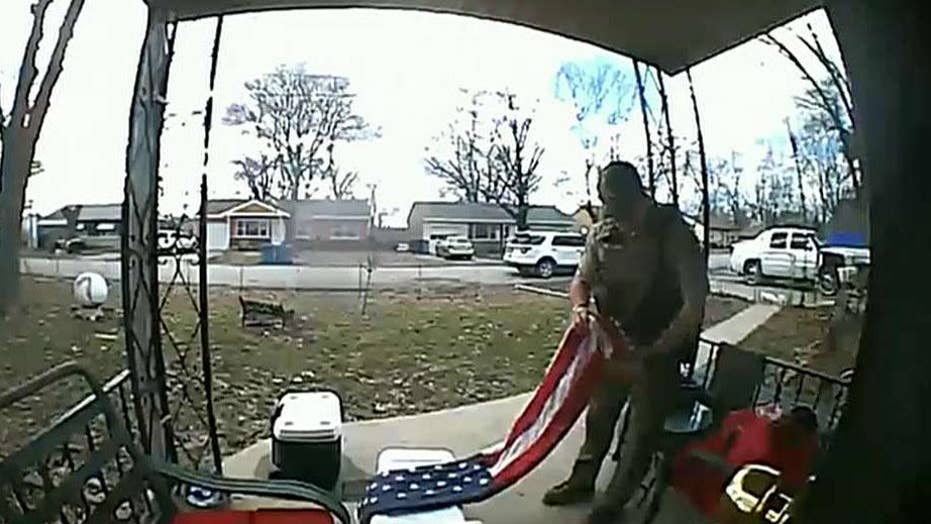 A sheriff's deputy and veteran in Missouri went above the call of duty earlier this month after spotting an American flag on a broken flagpole that was nearly on the ground.

The Clay County Sheriff's Office said in a Facebook post the incident happened on March 15 in Avondale after a storm had passed through the region and Deputy Brandon McElroy was driving through the neighborhood.

Video from a Ring doorbell camera sent into the sheriff's office by the homeowner shows McElroy slow down in front of the house, turn around and get out after noticing the flag partially draped on the ground.

"Seeing the flag down, my first reaction was to do the right thing and make sure to show respect and pick it up off the ground," McElroy told "Fox & Friends." "I'm not necessarily on the lookout for it, but driving in that area I've always noticed his flagpole up with the flag waving, and driving through that area that particular morning I noticed it was down and just had to pick it up."

In the video released by the sheriff's office, McElroy can be seen going onto the front yard and removing the flag from the broken pole before respectfully folding it up on the front porch of the home.

"It means a lot to me," he said Sunday. "Growing up, you show your respect to the flag. Doing little things such as making sure it doesn't touch the ground or picking it up off the ground, just little things you can show it respect."

The sheriff's deputy served for 7 1/2 years with the Air Force at Whiteman Air Force Base in Missouri as a security forces member.

At the time, McElroy said he didn't realize that there was a doorbell camera recording him. It was hours later that day when he was approached by the homeowner's wife who thanked him for his kind deed.

He told "Fox & Friends" he strives to make sure to always do the right thing, even when nobody is watching.