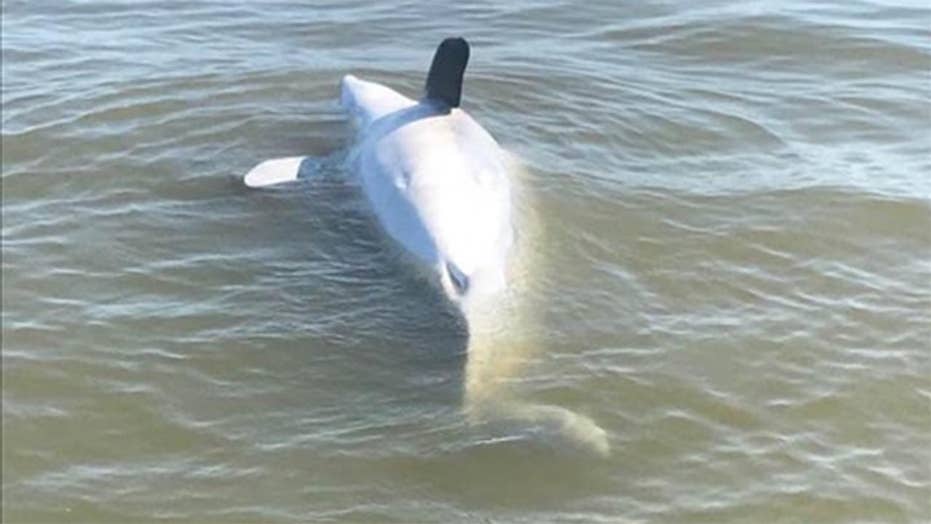 Record flooding has wreaked havoc on communities across the country. That’s no different for folks in the Mississippi Gulf Coast who are uncertain if their fishing industry can hold up against the might of mother nature.&nbsp;

PASS CHRISTIAN, Miss. -- The Mississippi Gulf Coast is now bearing the effects of the record rain and snowmelt that has caused major flooding throughout the Midwest this year.

The influx of water that has drained into the Mississippi River and is now being diverted into the gulf coast has wreaked havoc on marine life and Mississippi’s commercial fishing industry.

The Bonnet Carre Spillway, for the first time ever, has been opened twice in the same year to relieve pressure on the levee system that protects the city of New Orleans from being drowned by flood water from the Mississippi River. Some of that water is being diverted into Lake Pontchartrain, which then drains into the Mississippi Sound -- diluting the mix of freshwater and salt water with gallons upon gallons of freshwater.

Commercial fishing boats sit in the Pass Christian Harbor in the Mississippi Gulf Coast after fresh water inundated the Mississippi sound and forced marine life to water where they can survive. (Fox News/ Charles Watson)

The opening of the spillway has helped to save New Orleans from devastation, but it’s done the opposite for marine life. Many sea creatures have either died or been forced to vacate the Mississippi Gulf Coast because of the water’s low salinity. According to the Institute for Marine Mammal Studies, more than 85 dolphins have been found dead this year with lesions on their skin -- the highest number in nearly a decade.

Commercial fisherman, Kevin Black, is really feeling the struggle this season. On a sunny day with calm waters, he normally would be able to net several dozen crabs. This year, those opportunities have been far and few between.

Black said in a normal year, he’d be off the water two weeks before April rolls around. This year, the lack of marine life has forced him to stick around through May and into June. He’s now on his third deckhand and has had to forego repairs to his boat because money has been tight.

“Don’t spend no money at all,” he chuckled as he explained how he’s surviving with little income. “Don’t do nothing but sit and wait to go to work because everything you do costs money.”

The situation could be worse for oyster farmers who were already yielding just 4 percent of the half a million oysters fishermen would harvest before disasters like Hurricane Katrina and the Deep Horizon oil spill ruined nearly all of the state’s coastal oyster reefs. The Mississippi Department of Environmental Quality had already spent at least $11 million to replenish the reefs within three to five years, but experts believe the investment may be awash as oysters are unlikely to survive in low salinity conditions.

Dr. Anna Linhoss believes if the spillway is continually opened every year or two it could wipe out Mississippi’s $40 million oyster industry.

“Some of the reefs close to where that water comes into the sound can lose up to 100 percent of their oysters,” said Dr. Anna Linhoss, assistant director of Northern Gulf Institute.

Ryan Bradley, executive director of the Mississippi Commercial Fisheries United, said that’s the direction things are going and believes it will get worse for fishermen if help isn’t on the way. He said in a good year commercial fishermen could bring in $100,000 in profit from what they catch out on the water. This year, guys are trying to survive off $15,000 to $20,000.

“We’ve lost probably 60 to 70 percent of the shrimp and oyster fleet over the last 10 years. If we keep going the way we’re going, there won’t be any industry left here in Mississippi,” explained Bradley. “We need emergency relief funds to help these fishermen out. Every day that goes by, that’s another business down here that’s going out of business.”

For now, Black is doing what he can to keep himself afloat. Though after 35 years of making a living on the water, he now questions if commercial fishing is a viable option for him any longer.

“It’s been questionable lately," he said, "especially when my kids ask.”