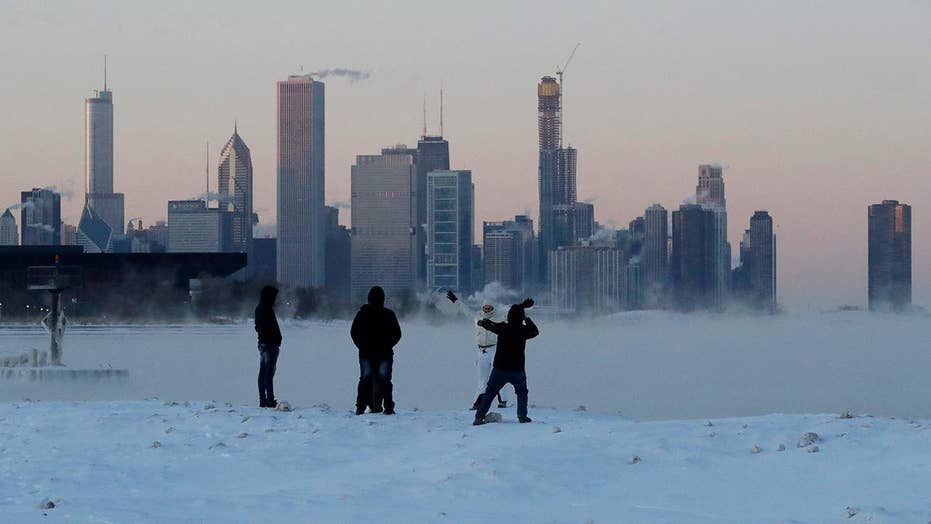 At least 10 people -- including a college student and Indiana police officer -- are dead as a result of the bitter, record-breaking deep freeze brought on by the polar vortex that's slammed the Midwest most of the week.

Though the National Weather Service said temperatures will "slowly begin to moderate," the bone-chilling cold on Thursday still shuttered schools and caused the U.S. Postal Service to suspend mail delivery in several states. Wind chills of negative 45 degrees Fahrenheit were reported Thursday morning in International Falls, Minnesota and minus 23 degrees in Minneapolis. Des Moines, Iowa reported a bitterly cold wind chill of minus 25 degrees and Chicago had a wind chill of negative 41 degrees just before sunrise.

Temperatures on Friday and into the weekend will "rise considerably" in the Midwest, giving the region some relief, according to Dean. The blast of polar air that enveloped much of the Midwest from Tuesday through Thursday snapped rail lines, canceled hundreds of flights and strained utilities -- and led to at least 8 deaths across the region.

Wind chills across the region on Thursday morning.

Here are the victims so far of Polar Vortex 2019:

A pre-med student at the University of Iowa was found behind an academic building on the Iowa City campus just before 3 a.m. by campus police on Wednesday died after he was rushed to the hospital.

Gerald Belz, 18, was found in a building located across the street from the Iowa Memorial Union, CBS2/FOX28 reported.

Police haven’t released a cause of death but believed the frigid temperatures played a role. Wind chill at the time police found Belz was minus 51 degrees, according to the National Weather Service.

Belz's father, Michael, told CBS2/FOX 28 that authorities told them that "zero alcohol was found in his system."

He also told KCCI-TV that his son, who graduated from Cedar Rapids Kennedy High School, wanted to be a cardiologist.

"I want people to remember him as a compassionate person," Michael Belz told KCCI. "He had many more friends than I was aware of. He didn't bring many friends over to the house, but we knew he had lots of friends."

A former city council member in Michigan was found dead Wednesday, and authorities believe his death is related to exposure to the elements.

Gary Sammons, 70, was found in front of his home in Ecorse, located south of Detroit.

Police told FOX2 Sammons may have fallen and was unable to get up or get back inside. Neighbor Jeneane McQueen told FOX2 that Sammons had some knee issues and would be very slow and careful when walking outside.

"Mr. Sammons was a good neighbor, he was caring," McQueen told the television station. "I saw somone laying down and I was just like oh my god, it's so cold out here, it was 35 below out here this morning."

The frozen body of a 70-year-old man was discovered Wednesday morning in Detroit, where temperatures dipped to negative 6 degrees.

Detroit Police had received a call around 2 a.m. Wednesday on a missing person, but were unable to find the man at the time, FOX2 reported. The man, who was only wearing underwear at the time and was not identified, was discovered about six hours later, police said.

Family members reported the man had medical issues but did not specify what those are, according to FOX2. Police do not suspect foul play in the man's death.

A 55-year-old man was found frozen in a garage in Wisconsin on Tuesday after he collapsed and died after shoveling snow. (FOX6)

A 55-year-old man was found frozen in a garage in Wisconsin on Tuesday as the bitter cold set in.

The Milwaukee County Medical Examiner’s Office told FOX6 that Charley Lampley collapsed and died after shoveling snow at his home in Milwaukee.

Lampley was found frozen in a detached garage near a snow shovel and had appeared to have had been outside overnight. The garage door was open, and the medical examiner noted Lampley was fully clothed and dressed for the weather. The preliminary manner of death was ruled “natural," according to FOX6.

An 82-year-old central Illinois man died in the cold weather after authorities say he was found several hours after he fell trying to get into his home.

Peoria County Coroner Jamie Harwood told the Peoria Journal Star that a neighbor found the Marquette Heights man Tuesday afternoon and called 911. Harwood says his office was called to a Peoria hospital, where the man was pronounced dead later Tuesday.

The man's cause of death was related to cold exposure. He wasn't immediately identified pending notification of family.

An Illinois man was struck and killed by a village snow plow as he was working hard to clear his own driveway Monday morning, police said.

The traffic crash occurred on Bridle Court in Libertyville — a Chicago suburb — around 9:50 a.m., Libertyville police confirmed in a news release. The man, who has not yet been identified, was pronounced dead at the scene.

The Noble County Sheriff's Office said that 22-year-old Ligonier Police Officer Ethan Kiser's SUV spun into the path of another SUV near Cromwell, killing him and 21-year-old wife Shawna Kiser.

Ligonier Police Officer Ethan Kiser and 21-year-old wife Shawna Kiser were killed in an accident Monday on a snow-covered road.

The body of a 60-year-old man was outside on Wednesday amid frigid temperatures.

The East Lansing Police Department told WILX-TV the man's body was discovered in East Lansing, and that authorities do not suspect foul play.

An autopsy will determine the cause of death, according to police.

A 60-year-old woman whose body was found in a vacant house in Ohio likely died due to the dangerous cold gripping the state, officials said.

Lorain County Coroner Stephen Evans told The Chronicle-Telegram that the woman appeared to have died of hypothermia at the home in Lorain, located west of Cleveland.

“When it gets this cold this is terrible for the homeless,” Evans told the paper.

Authorities said the woman, who has not been identified, may have been staying in the house for months and apparently died in the last day or two.