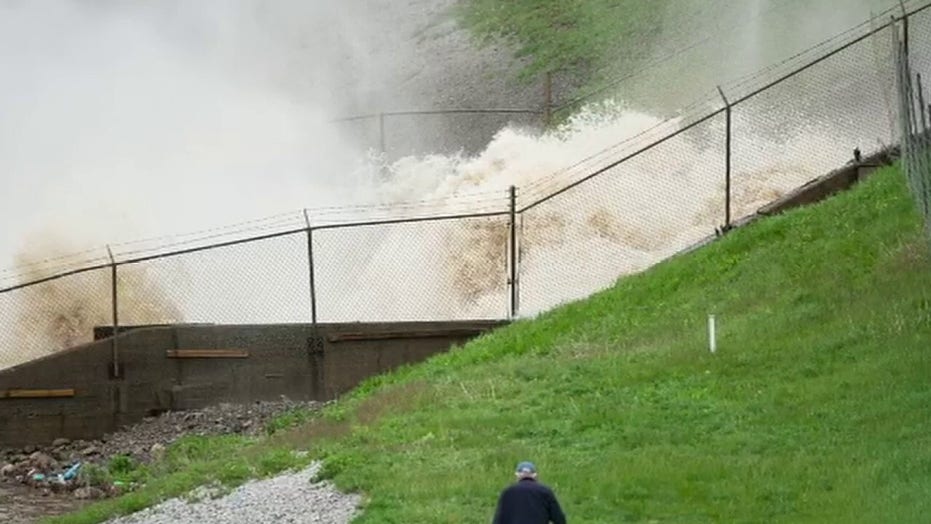 Floodwaters are rising at a rapid rate after two dams are breached in Midland, Michigan.

Floodwaters in central Michigan broke records early Wednesday and threatened to rise even higher after catastrophic dam failures forced about 10,000 people to evacuate as the region faces an additional hardship during the coronavirus pandemic.

The National Weather Service (NWS) said the Tittabawassee River in the city of Midland reached its highest level ever Wednesday morning at 33.97 feet and is expected to rise up to 38 feet by midday.

“This is unlike anything we’ve seen in Midland County,” Michigan Gov. Gretchen Whitmer said at a news conference on Tuesday. ”If you have a family member or loved one who lives in another part of the state, go there now."

Whitmer, who declared a state of emergency for Midland County, said that downtown Midland could be under 9 feet of water by midday Wednesday as the water released from the dam failures reaches the city.

Water floods the Midland Area Farmers Market and the bridge along the Tittabawassee River in Midland, Mich., on May 19. (Kaytie Boomer/MLive.com/The Bay City Times via AP)

"We are anticipating an historic high water level," the governor said.

A view of the flooded area near the Sanford Dam on Tuesday, May 19, 2020. (Kaytie Boomer/MLive.com/The Bay City Times via AP)

The NWS on Tuesday evening urged anyone near the river to seek higher ground following “catastrophic dam failures” at the Edenville Dam, about 140 miles north of Detroit, and the Sanford Dam, about 7 miles downriver.

The NWS said a flash flood emergency continued for the area until at least 2:15 p.m. on Wednesday.

Significant flooding was reported in the city by daybreak.

Water that was several feet high covered some streets near the river in downtown Midland, including riverside parkland, and reaching a hotel and parking lots.

A view of the flooded area near the Sanford Dam on Tuesday, May 19, 2020. (Kaytie Boomer/MLive.com/The Bay City Times via AP)

As of early Wednesday, parts of the city of Midland, and the villages of Sanford and Dow Chemical had been evacuated. State officials also were working to help residents leave Tittabawassee Township, Thomas Township, and Saginaw Township.

There have been no reported injuries or fatalities due to the flooding, and no reports of anyone trapped by the high water, Midland County spokeswoman Selina Tisdale said Wednesday.

Freeland resident Cyndi Ballien walks up to get a closer look as heavy rain floods North Gleaner Road near its intersection with Tittabawassee Road on Tuesday, May 19, 2020, in Saginaw County, Mich. (Jake May/The Flint Journal via AP)

In response to the coming floodwaters, several shelters in high schools and family centers opened across the region, FOX2 reported.

Michael Sharrow, the superintendent of Midland Public Schools, said Tuesday night that a "large crowd" of elderly residents were at Midland High School.

"Our community cares for each other.  We're working hard to open our homes and shelters to our friends and neighbors," Midland County said on Twitter "That's no small task as we are displacing about 10,000 people tonight!"

The governor encouraged people to do their best to take precautions to prevent the spread of coronavirus, such as wearing a face covering and observing social distancing “to the best of your ability.”

"This truly is a historic event that is playing out in the midst of another historic event," Whitmer said Tuesday night, referring to the coronavirus pandemic.

As of Wednesday, there were 52,350 cases of COVID-19 in Michigan with at least 5,017 deaths, according to Johns Hopkins University.

But while the state overall has a high overall number of infections, Midland County has had only a small number of those, with fewer than 80 cases and less than 10 deaths. Still, some dealing with the flooding and evacuations remained aware of the dangers posed by the virus.

Cots at some area schools set up Tuesday as shelters were spaced apart to adhere to social distancing guidelines.

Catherine Sias, who lives about 1 mile from the Edenville Dam, told the Associated Press she first left home early Tuesday morning. “All of a sudden we heard the fire truck sirens going north toward the dam.”

Sias, 45, said when she evacuated along M-30, a state highway and the main road through Edenville crossing the river north of town, she saw the rushing Tittabawassee River.

“It was very dramatic, very fast and full of debris,” she said.

Tyler Marciniak, of Grand Rapids, carries hanging plants through floodwaters as he helps his father, Tom Marciniak, assess the damage to his home on Red Oak Drive on Wixom Lake, Tuesday, May 19, 2020, in Beaverton, Mich. (Katy Kildee/Midland Daily News via AP)

The same storm system brought heavy rain and flooding to the Chicago area over the weekend before moving east.

Among those responding to the flooding in central Michigan include the National Guard, 125 Infantry and the Red Cross. 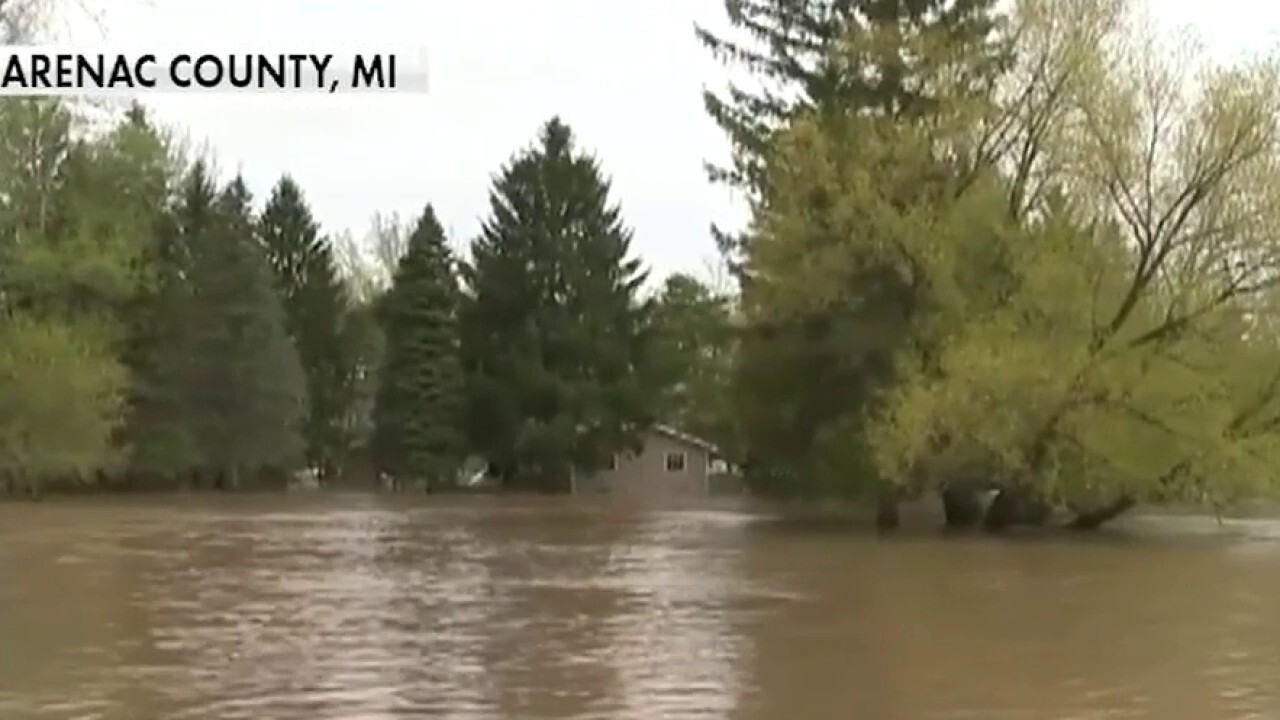 In 2018, the Federal Energy Regulatory Commission revoked the license of the company that operated the Edenville Dam due to non-compliance issues that included spillway capacity and the inability to pass the most severe flood reasonably possible in the area.

Both dams are in the process of being sold.