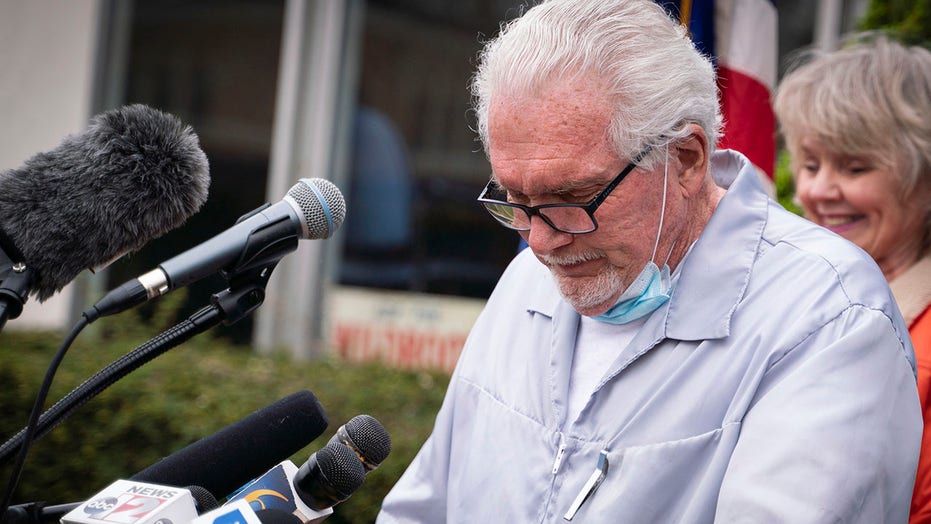 A Michigan barber who reopened his shop in defiance of Gov. Gretchen Whitmer’s coronavirus shutdown orders had his license temporarily stripped Wednesday.

Karl Manke, 77, became a symbol of resistance when he opened the doors of his Owosso shop on May 4 and refused to close, pledging to keep his doors open until police arrest him or “Jesus walks in.”

After a judge declined to sign an order to shut down his shop Monday without first holding a hearing, state regulators opted to suspend Manke’s barber and shop licenses.

“It is paramount that we take action to protect the public and do our part to help save lives,” Attorney General Dana Nessel said.

Manke became emotional while speaking during a press conference Monday at outside his barbershop in Owosso after a judge declined to sign a suspension order before holding a hearing. (Sarahbeth Maney/The Flint Journal via AP)

However, Manke’s attorney, Dave Kallman, told the Lansing State Journal that the state’s action against the 77-year-old barber is “an abuse of power.”

Manke is still able to cut hair until the suspension is served; it had not reached the barber’s hands as of Wednesday afternoon, the paper reported. He can ask for an immediate hearing with an administrative law judge at the Department of Licensing and Regulatory Affairs to fight the order.

Manke has given over 100 haircuts, and fields more calls than that daily, all while continuing to cut hair. He has followed sanitary measures while working, including wearing a mask and sanitizing his tools with ultraviolet light.(Jake May/The Flint Journal via AP)

Manke has cut hair for 60 years in Owosso, a small town 40 miles northeast of Lansing. He told reporters after reopening that he had no choice but to return to work because money got tight. He was issued a cease-and-desist order and two misdemeanor citations that could result in fines totaling over $1,000, but he refused to close.

Under Whitmer’s strict “stay-at-home” orders, hair salons and barbershops have been closed for weeks to curb the spread of the coronavirus. The governor has faced mounting criticism, including armed protests at the Capitol and death threats online, for her restrictions.

Speaking to Fox News on Sunday, Manke said: “Obviously she [Whitmer] has no concept at all, the damage that she's doing to our state and to families.”

Manke reopened his shop May 4 despite the governor's order not to conduct business, telling local media he could no longer afford to stay closed. (Sarahbeth Maney/The Flint Journal via AP)

His defiance attracted the attention of Michiganders from across the state who drove hours to support Manke at his shop, some even getting haircuts.

“I don’t need the governor to be my mother," Manke told the Flint Journal last week. “I have one. God bless her, she’s gone now. I don’t need another mother. I can make these adult decisions myself.”